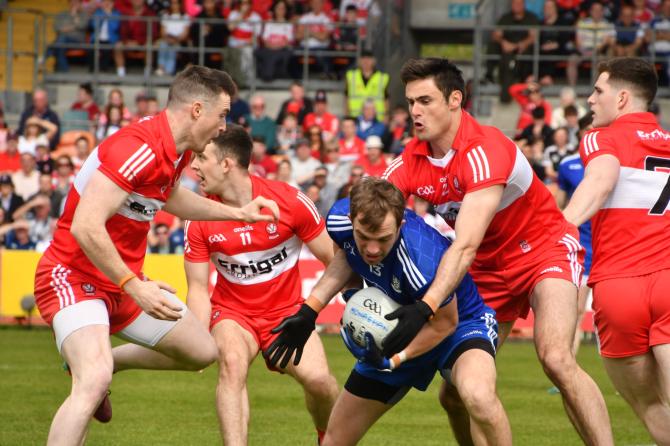 Derry have impressed on their way to Sunday's final.

IN EXCESS of 30,000 spectators will crowd into the north Monaghan town of Clones, multiplying its population 20 fold on Sunday for what is the most intriguing Ulster final for decades, writes Bernie Mullan.
It is intriguing in the sense that Donegal were favourites from day one and Derry were among the outsiders.
Derry went on to beat reigning Ulster and All Ireland champions Tyrone and last year’s finalists Monaghan, the two teams just behind Donegal in favouritism.
For counties that border each other, albeit slightly, there is not the normal cut and thrust rivalry that there would be with Derry/Tyrone, Donegal/Tyrone or Armagh/Tyrone.

It has always been the case of co-operation between these counties going back to the early days of the GAA in the 1880’s.
Due to their geographical location, clubs from Innishowen and ‘The Pale’ (East Donegal) played in Derry competitions. Most of the local GAA at that time centred around Derry city. Teams from Donegal have won the Derry senior hurling and football championships and the Donegal football final of 1919 was played at the Brandywell!
Until the early thirties players from east Donegal and Innishowen were eligible to play county football with Derry. Until the early sixties teams like Inch, Killea and Muff played in the city GAA League as well as competitions like the Mahon Cup.
Now, in the modern era, some Donegal hurling clubs partake in Derry competitions. When these counties won their All Irelands - Donegal 1992 and Derry 1993 - they gave huge support to each other. Indeed, among the many Donegal people at the Derry homecoming in Maghera in 1993 was none other that Daniel O’Donnell!

On their way to the final Derry have accrued a total of 4-30 (42) and conceded 0-27. Donegal hit 3-32 (41) in their wins and conceded 0-28. Neither has conceded a goal yet!
Derry have a plus of 0-15 and Donegal 0-13. In essence, Derry had the tougher road to travel but neither team never really looked like losing their two opening games.

The most recent evolution has been the role of roving goalkeepers patented by the likes of Rory Beggan and Niall Morgan. Odhran Lynch, the powerful Derry number one, has joined the club and he probably hit the pass of the season to Niall Toner who set up Benny Heron for Derry’s second goal against Monaghan.

Gone are the days when backs dare not move out of their position and forwards were the only players expected to score. Now even the goalies are getting in on the scoring act!
When it comes to man marking Derry captain Chrissy McKaigue is exceptional. He has curtailed Jack McCarron, Darren McCurry, Paddy McBrearty and Rian O’Neill - some of the best forwards in the game. He is likely to lock horns with McBrearty on Sunday again. Brendan Rogers may test Michael Murphy and Connor McCluskey’s pace tracking Jamie Brennan.
Back in 2015, Conor McManus, one of the gentlemen of Gaelic football, was the guest at the Magherafelt club’s youth presentation. He presented an award to young Connor McCluskey probably never thinking that McCluskey would be shadowing him in an Ulster semi-final seven years later.

It has not hit the headlines that Derry had the best defence of the 33 teams who participated in the four divisions of the National Football Leagues. They had five clean sheets in the league and two in the championship games so far.
Monaghan manager Seamus ‘Banty’ McEnaney said in an after match interview that he felt that if they scored 17 points it would win the game. He then went on to describe Derry’s three classy goals as ‘soft.’
Goals could be the key to Sunday’s decider. Last year at Ballybofey it was the missing of clear cut goal chances that cost Derry the game.
That is an aspect of their play that Derry have improved on with four in the bag so far to Donegal’s three. The two Donegal goals against Cavan came from ‘Hail Mary’ efforts into the goalmouth but against Armagh Declan Bonner’s men should have had more than one goal.

There was a time when Gaelic football was all about a high catch and a long ball but so much has changed. Now it is about keeping the ball and working it towards the opposing citadel. Players are probably fitter than in any other field sport.
The pace of the game is almost frightening and pace is a vital part of the Derry armoury at present.
The middle eight can switch from a defensive position to an attacking one, making it very difficult to contain them. At times Derry have had three or four players ahead of the ball when they break.

Coming Through the Ranks

Seven years ago Derry began to make an impact at minor level, beating Cavan in the 2015 Ulster final after a blank spell going back to 2002.
They followed with wins in 2015, 2017 and 2020 where from there they went on to beat Kerry in the All Ireland final. The current panel of 30 players contains 20 players who came through the grades.
At the other end of the scale, captain Chrissy McKaigue played for the Derry minor team that came through the qualifying stages to face Galway in the 2007 All Ireland final, a game Derry lost due to late Galway goal. Despite a two year stint in Aussie Rules football he has still played 110 times for his county.
Six players from the 2020 minor team are in the squad, including Lachlan Murray, Matthew Downey the captain, Callum Downey, Eoin McEvoy, Donncha Gilmore and Mark Doherty.
With just the captain and Benny Heron, who made his debut in 2013, over the thirty mark it is quite a young Derry squad. Rory Gallagher and his selectors were obviously looking into the future.
The full Derry squad is Chrissy McKaigue, Padraig Cassidy, Brendan Rogers, Shane McGuiigan, Paul McNeill (Slaughtneil), Conor Glass, Ethan Doherty, Conlann Bradley, Emmett Bradley (Glen), Odhran Lynch, Connor McCloskey, Eoin McEvoy (Magherafelt), Niall Toner, Shea Downey, Matthew Downey, Enda Downey, Callum Downey (Lavey), Anton Tohill, Oisin McWilliams (Swatragh), Donncha Gilmore, Ben McCarron (Steelstown), Benny Heron (Ballinascreen), Declan Cassidy, Paul Cassidy (Bellaghy), Conor Doherty, Mark Doherty, Padraig McGrogan (Newbridge), Gareth McKinless (Ballinderry), Lachlan Murray (Desertmartin), Niall Loughlin (Greenlough).
Despite losing Ciaran McFaul from the panel, Padraig Cassidy struggling with injury and Oisin McWilliams out with a broken jaw it has been a remarkable journey so far for Derry.

Derry Unlikely To Change Tactics
When you have a system that works there is no point in changing it. Derry beat both Tyrone and Monaghan with the same style of play.
If anything, Rory Gallagher and his selectors may be tempted to start Emmett Bradley at midfield to counteract the Donegal ‘tall trees.’
Donegal will be desperate to make amends for the last two seasons. Shocked by a late Cavan goal in the Covid year of 2020 and tripping themselves up against Tyrone last year.
Questions will be asked as to which team has improved the most from last year. Donegal will have Michael Murphy starting this time. Derry have found their way to the net after struggling for majors in previous years. Did Derry catch Tyrone in an over confident mood, did Monaghan walk into an ambush? Were Armagh as bad as they looked against Donegal.
Were Cavan as good as they looked against Donegal. All these questions will be answered around 5.35pm on Sunday if it is not a draw. No matter what the result Derry are moving in the right direction.
If they can repeat their form of last year at Ballybofey it could be good enough. Benny Heron still agonises about his effort coming off the bar and down on to the goal line in that game. In a game of inches Benny’s eye for goals could be crucial!