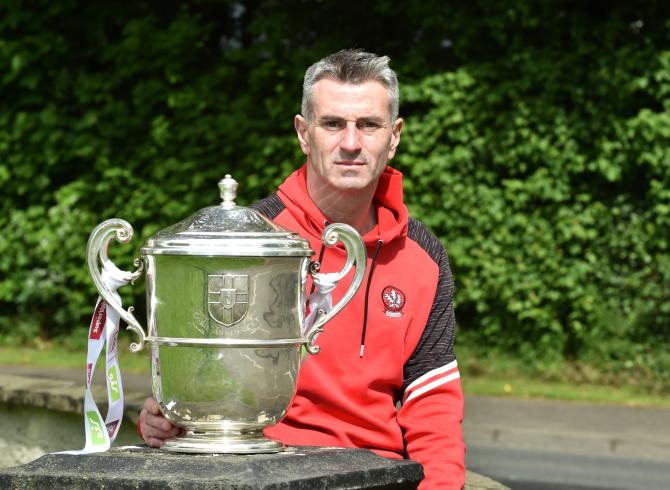 Derry boss Rory Gallagher would love to get his hands on the Anglo Celt cupthis Sunday.

DERRY manager Rory Gallagher admits that Sunday has the 'potential' to be a brilliant day for the county - but only if the players reproduce a level of performance similar to that which saw them battle past Tyrone and Monaghan in previous rounds.

Gallagher's men take on Donegal in an eagerly anticipated senior decider at 4pm and, with Martin Boyle's minors facing Tyrone in the curtain raiser at 1.30pm, it promises to be a red (and white) letter day for the Oak Leaf county at a packed St. Tiernach's Park in Clones.

It's 22 years since both Derry teams shared the Ulster final stage and the sense of excitement is palpable across the county. But while the minors have gone on to enjoy great success since 2000 the same can't be said of the senior side who have endured a torrid time since last lifting the Anglo Celt Cup back in 1998.

Their last appearance in the Ulster final was in 2011 when Donegal, ironically enough, had six points to spare in a 2-11 to 1-08 and since then they have been conspicuous by their absence in the latter stages of the Ulster SFC.

Things are different this year. A dismantling of All Ireland champions Tyrone in their own back yard at Healy Park caused plenty of people to sit up and take note and when they backed that up with a hard-earned win over Monaghan they were no longer under the radar.

Suddenly, you had observers tipping them for Ulster, an incredible turnaround in fortunes for a county that not that long ago was treading water in the lower reaches of the Allianz National League pyramid. And especially when Donegal are the team standing in the way of ending an almost quarter of a century famine.

The phrase 'been there and done it' could have been coined for Declan Bonnar's group, given their unrivalled experience in a provincial championship generally regarded as the most competitive and hard to win.

In the decade 2011-2021, Donegal appeared in nine finals, winning five, the most recent of which came in 2019. Twelve months later they lost to the same opponents in a defeat which still rankles in the Tir Conaill county and in 2020 they were out of the picture entirely as Tyrone claimed the crown on their way to winning the All Ireland.

It's a hungry Donegal team that awaits in the county Monaghan market town on Sunday but in opponents Derry they will meet opponents ravenous to reclaim their seat at the top table.

“Other teams know what we're about now so we have to produce on Sunday,” admitted Derry boss Rory Gallagher this week.

“This is a very hungry group and we have to show that hunger, that fight, the absolute desire to get the job done.

“The hunger is this current group of players is immense and that personal hunger can be a very powerful tool.

“It's been a long time since Derry won an Ulster title but some of these boys weren't even born then,” he added.

Gallagher, of course, is the one man in the Derry camp with experience of winning in Ulster, having been part of the Donegal set-up alongside Jim McGuinness when they made the breakthrough in 2011 after a barren spell of their own.

And that experience could prove vital as kick-off approaches and a youthful Derry take a step into the unknown.

“Training has been good and it's about enjoying the build-up,” continued Rory.

“Everything is geared towards getting things right on the day and getting the maximum performance from the group.

“For us, it's no different to the first round game against Tyrone, except that the crowd will be bigger.

“Our boys have all had big days throughout their careers, whether that be at under age level or with their clubs, and we want to harness all that.

“I'd say there's not a lot between ourselves and Donegal so we'll see what happens on the day.”

It's a moot point: while they haven't won an Ulster, there are plenty in the Derry ranks with vast experience of winning provincial and All Ireland titles at club and minor level, including a good number from the All Ireland minor winning team of 2020.

They also bring a freshness with them, a youthfulness and a fearlessness which will ask plenty of questions of a Donegal side, many of whom have been on the road a long time, not least their talismanic skipper Michael Murphy.

It all adds up to an intriguing decider in front of an estimated 30,000 strong crowd.

“Since the draw was made there's only one place I wanted to be and thankfully we've earned the right to be there,” continued the Derry supremo.

“It has the potential to be a brilliant day: it's not often you get to contest both finals and it's a big day for everyone connected to the county.

“We've had great support this year and can really feel the momentum. We want to harness that because this belongs to everyone, not just the players and management.

“Sunday promises to be a brilliant occasion but it's up to us to produce a performance.”