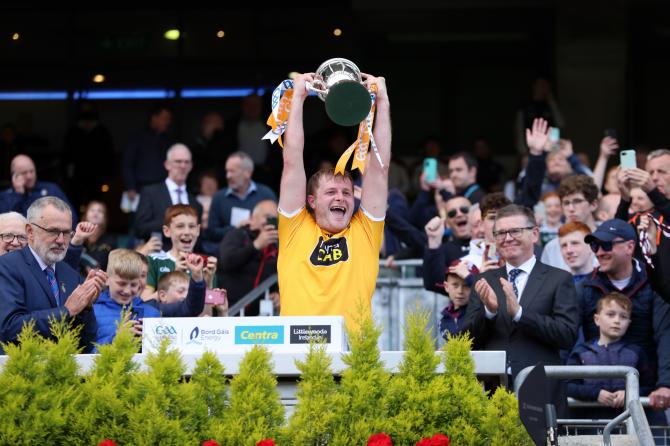 ANTRIM HURLERS will look to build on the momentum of a dramatic Joe McDonagh Cup final win when they host Cork in one of two All-Ireland SHC preliminary quarter-finals this weekend.
The Saffrons entertain the Leesiders at 2pm on Saturday at Corrigan Park, buoyed by a memorable 5-22 to 4-24 victory over old rivals Kerry in Croke Park.
The second semi-final features The Kingdom against Wexford at Austin Stack Park in Tralee at the same time.
Saturday’s Joe McDonagh win was Antrim’s second success in the competition in the past three years and brings with it great rewards.
As well as this weekend’s clash with Cork, Darren Gleeson’s side have secured themselves a coveted place in next year’s round robin Leinster senior hurling championship.
“It is massive,” the Saffrons’ boss admitted to reporters in the aftermath of Saturday’s win.
“When we won the Joe McDonagh Cup two years ago, we got thrown in at the deep end because of Covid.
“We need four or five matches of Division One hurling then four or five matches in the Leinster Hurling Championship to develop ourselves.
“We lost that opportunity.
“We went into a no-win situation against a hot Dublin team, knock-out hurling straight away.
“We have to try and build depth by playing those five Division One and those five Leinster Championship matches,” he added.
Certainly, the weekend’s Croke Park experience will help in developing the current squad.

It was a day of great emotion and tremendous relief for the Saffrons as they edged out the Kingdom in a ding-dong battle from start to finish.
One point separated the sides at the end of the 70 minutes when it looked like Antrim would win comfortably by half time.
Then, the Saffrons held a ten point lead and looked to have seen off a mini-Kerry revival but the Kingdom were relentless in the second half, led superbly by substitute Jordan Conway and Mikey Boyle in defence
Ultimately, it was Antrim’s ability to create and execute their goal chances, five in all, with two going the way of Ballycastle’s Ciaran Clarke, while James McNaughton, Seaan Elliott and man of the match Conal Cunning picked up singles.
The Saffrons certainly gave everything they had and at the end of the contest there was more than a few tired bodies on the Croke Park turf.
The celebrations will come and go quickly, however, as they look forward to welcoming Cork to Corrigan Park in the All-Ireland qualifiers this weekend.