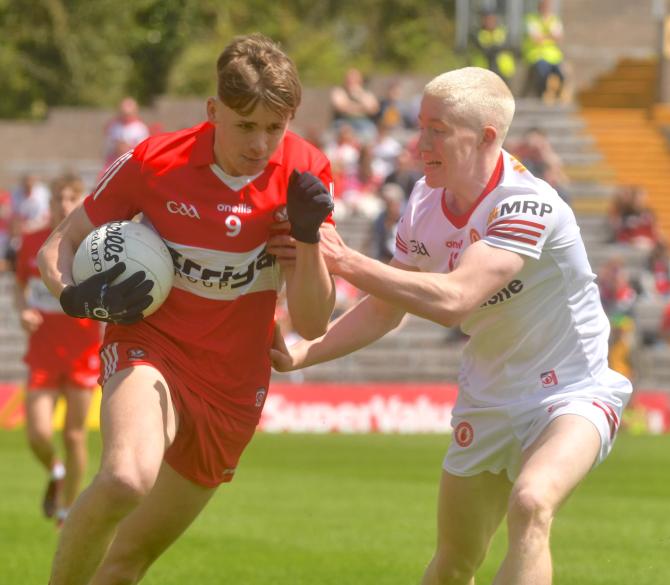 Derry lost out to Tyrone in the Ulster final.

THE reward for Derry’s Ulster minor final defeat by Tyrone is a quarter-final meeting with a formidable Cork team that caused an upset in the Munster final by beating Kerry. In fact, it was an unbelievable upset with a 25 point turn around.
In the Munster semi-final Kerry beat the Cork teenagers by 1-16 to 0-5 and that put Cork into the qualifiers.
They got past Tipperary and, as luck would have it, they had home advantage over their great rivals Kerry in the provincial final.
Kerry were strong favourites to win again but this game was a complete turnaround from the initial meeting with Cork winning by 3-11 to 0-9.
They led at half time by 1-9 to 0-5 with Brian Hayes getting the first of his two goals.
Just when Kerry looked like making a game of it they had their centre half back Darragh O’Connor red carded. Hughes and Alan O’Connor added further goals as the Leesiders cruised to victory.
Ulster champions Tyrone will now play Kerry in one of the other quarter-finals.
After a two year break due to the pandemic the quarter-finals have been introduced again and that gives teams a second chance.
Derry have had the misfortune to lose their brilliant captain Ryan McNicholl from Glenullin to a season ending knee injury in their semi-final victory over Donegal at Owenbeg. Prior to that they had beaten Armagh and Cavan comforably.
In the Ulster final at Clones the Derry boys lost to Tyrone by 4-8 to 0-16, the fourth Tyrone goal came in injury time when it looked as if Derry might take the game to extra time.
Derry had been the better team for long periods of the game in which they struck a post and the crossbar in the second half.
Cahir Spiers from Magherafelt was outstanding with his junking runs and two superb points highlighting the game. Eoin Higgins and Ciaran Chambers are also excellent forwards while the energetic Johnny McGuckin drops back as an extra defender.
The defence will have to be more vigilant than they were against Tyrone if they are to get to the semi final.
Behind a good midfield of Ruairi Forbes and Dara McPeake is a solid centre half in Odhran Crozier. Apart from his defensive prowess the strongly built Magherfelt lad is a good long distance place kicker.
Full back Jack Scullion has been struggling with a knee injury but is likely to line out for this crucial game which will define Derry’s season. Derry have the skill and team work to be there with a chance but they must avoid conceding goals.
Cork have a team of tall and strong players but they my lack the finer skills of Derry. They play a very direct game so the Derry keeper and full back line can expect a few high balls over the hour.
Cork has 259 clubs and Derry have just 40 but that will not phase the Derry management. They will be reminding their players that Derry have beaten Cork at this level before including in the 1983 All Ireland final.
Earlier this year Derry easily beat Cork seniors in the league. Just to underline again how the big and small can be evenly matched just go back to Saturday when Cork, the largest county in Ireland, met Louth, the smallest, in the All Ireland senior qualifiers. It took a late Cork surge to win by four points, their second goal coming in the last minute.
Derry minor boss Martin Boyle has told the media that his team are looking forward to the match and the chance to make amends for the Ulster final defeat to Tyrone and who would bet against them.