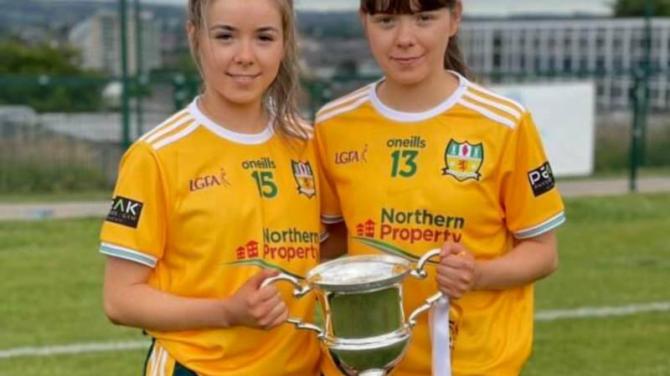 TWINS who have battled back from a horror road crash at the start of the year will return to fight another day after a thrilling draw in the All-Ireland Ladies Junior Football Championship at Croke Park at the weekend.

Caitlin and Aoife Taggart were told by paramedics that they were lucky to get out of an accident with their lives back in January.

The siblings from Aldergrove had been making their way to county training when they were involved in a crash on the Crumlin Road.

Their vehicle ended up on its roof and the emergency service used a specialised cutting device to help remove Aoife from the car.

Caitlin sustained minor cuts and bruises and was back playing football in a matter of weeks, but Aoife’s recovery has been slower than her sister’s.

After dislocating her shoulder in the accident, Aoife has only recently returned to full training and appeared as a substitute at Sunday’s big match final against Fermanagh.

“I dislocated my shoulder and had to get stitches in my left leg. My recovery was a bit slower, but I'm back to training fully now,” said Aoife.

“It was pretty scary. We were told we were very lucky to get out of it.

“When you are going through recovery and rehab, you just keep thinking of these big days. Thankfully, Antrim have made it to the final.

“I’ll be available for selection and I’ve been training now since the beginning of June.

“If we were knocked out of the Championship earlier, I wouldn’t have played any football for Antrim this year.”

Both Taggarts featured for Antrim in last year’s All-Ireland final when they suffered a 2-17 to 1-9 loss to Wicklow in Croke Park.

“It was great to have all that support to get back on to the pitch as fast as possible after the accident,” said Caitlin.

“I got back a bit quicker than Aoife.

“I wasn’t too badly hurt - Aoife is only really getting back to playing now.

“Last year we didn’t play well until the last 10 minutes of the game really.

“The atmosphere in Croke Park is unreal. The buzz about the place is class - it is totally different than any other venue.”

On Sunday, Caitlin played and was substituted in the 33rd minute, while Aoife was brought on from the bench in the 40th minute in the thrilling 1-13/1-13 draw.

The sides will meet again for a replay in two weeks.