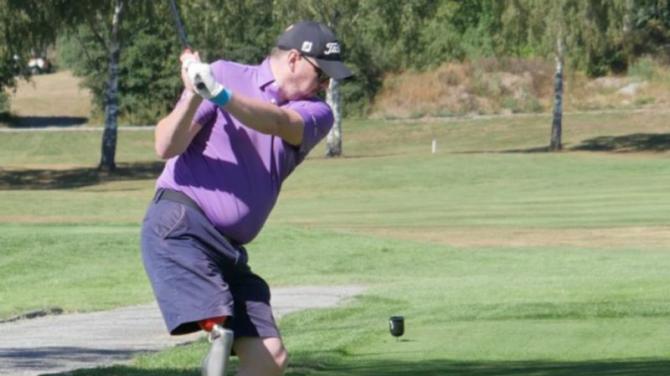 AN Antrim man has played a decisive role in the victory of disabled golf’s equivalent of the Ryder Cup - but the biggest win of his career has been tinged with sadness.

Gareth McNeilly had been a promising golfer in his youth, but his career appeared over in July 2004 when he was involved in a serious road accident in Newcastle.

The throttle on his powerful motorbike became stuck and it roared off at a terrifying rate. He was eventually thrown free, but the injuries were devastating.

The Antrim man may have lived to tell the tale, but he had lost a leg.

He is the first to admit that the intervening years have been ‘challenging’ to say the least but in June 2016 he decided that he refused to be defined by his disability - and he renewed his membership at Massereene.

And soon Gareth was playing at a standard which would be the envy of many able-bodied players.

Eventually he decided to test his mettle against his peers and he signed up to play in the Scottish Disabled Open. After leading on day one, he finished a creditable ninth.

Gareth may have felt a bit disappointed, but influential spectators were impressed - and in April he was asked to join the 14-strong panel of players hand-picked to contest the Phoenix Cup at Rotunda Golf Club near Tampa, Florida.

The event brought together players overcoming a range of conditions, from amputees to people with cerebral palsy. One American player ‘worked miracles’ from a specially adapted wheelchair.

Shortly after they touched down, it soon became clear how big the game has become in the United States.

“We were invited to the opening ceremony and the invitation said casual, so we rocked up in our team T-shirts, but the Americans arrived in matching team blazers with matching clubs and bags with their names on it. They had all the best kit.

“It was clear that they had come to win.”

But there was worse to come for the visitors. Much worse.

Back in the hotel on the night before the competition got under way, 58-year-old Billy Cairns began to feel unwell. He later suffered a heart attack and died.

“I was only really getting to know him, but some members of the team had played with him for years - and they were understandably deeply shocked and saddened,

“The event could have ended there and then, but the team decided that we had to play on - and to win it for Billy.

“The tragedy really galvanised the squad.”

And together they truly ‘played their hearts out’.

They won the four-ball competition on day one, but narrowly lost out on day two - leaving it all to play for in the singles on the final day.

In sweltering 33 degree heat Gareth led his team to a memorable win. Against all odds they won the last five matches to beat the United States by 13.5 points to 10.5.

The Antrim man said: “It was an amazing feeling. This was the best sporting achievement of my life.

“The heat, the crowd, the pressure. I loved it. We had to dig deep against a very good side, but we did it.

“The Americans were gutted, but they were a very gracious and generous group of guys. I can honestly say that I’ve made friends for life.

“At one point I was suffering because of the heat. I basically had blisters on my stump and my artificial leg was aggravating them. Quick as a flash, one of the Americans went to his car and gave me some of the blister pads he used.

“That’s the sort of people they were. It was a very competitive few days, but there was a great sense of community. Because many of us are living with similar problems, it was good to share our experiences.”

Next up for Gareth is the Algarve Open from November 21-25, organised by the European Disabled Association - and coach Johnny Foster reckons the best is yet to come.

“He tells me I’ve the ability to be a lot better. We’ll see.

“I’m playing pretty well at the moment. In fact, I think I’m a better golfer now than I was before the accident!

“It would be great to achieve a bit more consistency, but I’m sure Rory and the gang would say that too.

“Above all, I’m enjoying my golf.

“When you go through a life-changing accident it’s easy for people to lock the door and through away the key. It doesn’t have to be like that. Your life may have changed, but it’s far from over.”

And that’s precisely the message Gareth is determined to spread. England and Wales have well-developed programmes in place for disabled golfers, but Northern Ireland is lagging far behind.

“Groups like the Scottish Disabled Golf Partnership and British Inclusive Golf really are leading the way. One armed and blind golfers have organised here, but the options are more limited for amputees like myself.

“I’ve already held a few golf days and the response has been fantastic. I had one mother who brought her son, who has cerebral palsy, on a 150-mile round trip to take part in an event.

“Afterwards she messaged me and said ‘I have a different child now Gareth’. He’s now playing off the same tees as his father and he’s getting coaching. He’s excited about his golf and he has a new lease of life.

“There can be more of those sort of heart-warming stories if we come together.

“The game has inspired that young man, and he in turn is inspiring others. That’s what it’s all about.”

*Gareth can be contacted through the Antrim Guardian or Facebook.