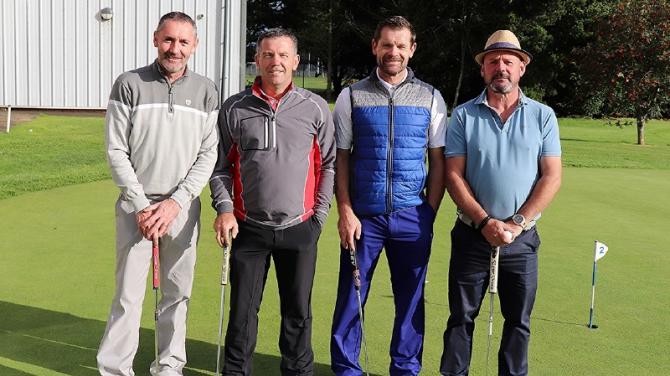 President, Ken White was hoping for a rain free day and the early starters did indeed enjoy a dry round of golf but most of the competitors had to endure some very heavy rain and blustery winds throughout their rounds.

It was a credit to the work of the ground staff at Allen Park that the course was able to withstand the amount of rain that fell during the early afternoon.

Scores were not as high as previous years, no doubt due to the weather, but the competition was won by Laurence Darragh with a very creditable score of 39 points, closely followed by Norman Bowman (38 points) and Sean Burns (37 points).

Niall Smart won the Best Gross prize with a round of 76 shots.

The Prize Presentations were held in the Yew Tree Bistro and Cafe at Allen Park followed by an excellent buffet provided by Yew Tree and this was followed by a disco/karaoke.

Also at the prize presentations, President Ken White presented an Honorary Membership of Antrim Golf Club certificate to John Condie, who is a past Captain and President of the Club.