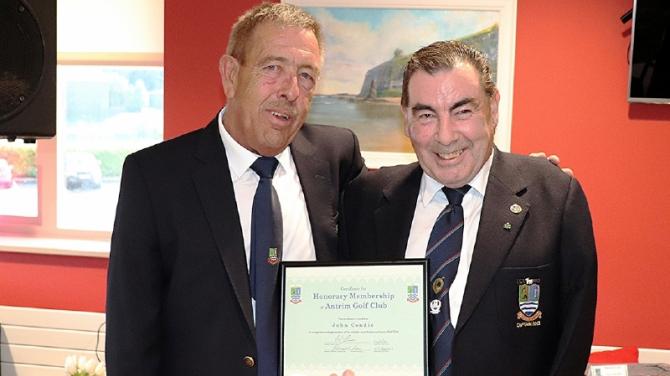 “On Saturday evening during the Presidents Day presentations I was called up by club Secretary Kenny Lee, to receive a very special award,” he said.

“It was presented by my friend Kenny White, President (pictured above).

“I was due to get this award in June along with Ivor McNally, who was very ill and sadly passed away before this presentation. So it was postponed quite rightly until Saturday night.”

Over the years John has been a Junior Convenor, Greens Convenor, Press Officer, Club Photographer, Team Captain for the teams entering the Ulster Cup, Jimmy Bruen, Pierce Purcell, Ulster Fourball and Senior Cup golfer but only enjoyedf success with the Pierce Purcell Team getting through to the last eight in Ulster.

He added: “I am also the only member to have been both Captain and President, which is something else I am very proud of.

“I used to practise on the driving range by knocking all of the balls into a big row so as my late friend Roy Kirkpatrick was able to get the balls all picked up in a couple of lifts with the ball lifting machine as they were selling around 40 baskets per night back in those days.

“I also represented the club during my 26 years of competing in The Society of One-Armed golfers World Championships having won several of their week-long competitions and weekend championships.

“Unfortunately lately, I haven’t been able to golf due to an ankle problem which is going to be operated on over the autumn months and a shoulder that has cried enough and needs replaced, as the rotator cuff has worn out and several tendons have snapped and dried up so the only option is for a shoulder replacement which is something I do not fancy at all.

“I did play on Saturday in The Presidents Day competition with former club founder Noel McCurry and also Philip Dewes, but after getting a good soaking on the second hole I really did struggle.

“But, I still managed to get the whole round completed, which was an achievement, against the multi handed golfers who play on a regular basis.

“I really am immensely proud to be recognised for the effort I put in to Antrim Golf Club over the years and my handicap apart from One Arm was down to 17 for a short time, hopefully I will get to enjoy a few more rounds before my clubs go into retirement.”