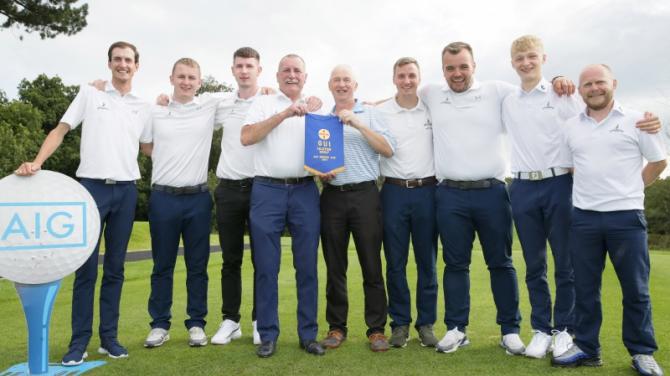 The Senior Cup is the highest level club competition in Ulster, and the Antrim team now go on to Westport in County Mayo for the All-Ireland finals from September 20-22.

This is the first Senior Cup that the Antrim club have ever won.

After victory over Shandon Park in the semi-finals, Massereene defeated Mourne GC in the final later the same day.

And team captain Hugh Mitchell was thrilled at their success.

He said: “This is a tremendous achievement for the club and is a great result after the months of hard work that the whole team have put in.

“Both Mourne and Shandon Park were tough teams to beat, but the players from Massereene stepped up to the challenge and brought home the first ever winning pennant for the club.

“We are off to Westport at the end of September so we have a few weeks preparation before we will proudly represent Ulster in the All-Ireland finals.”

This tremendous win comes off the back of Massereene hosting two days of the ISPS Handa Invitational Tournament (see pictures at the bottom of the page) - it was truly a week of top class golf for the club.

The Massereene team was: