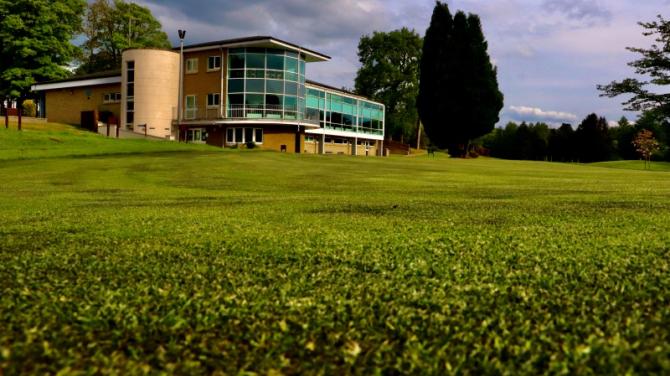 MASSEREENE Golf Club celebrated its 125th anniversary on August 31 - but sadly the party was more muted than the members had hoped.

Unfortunately due to the restrictions imposed as a result of COVID-19 it was not possible to celebrate the occasion in the traditional way - unlike the series of special events held at the time of the centenary in 1995.

At the opening ceremony that year, a ‘drive in’ marked the beginning of celebrations in March when the Centenary Captain of the Club, John McConnell struck the first shot.

Lord and Lady Massereene were special guests and brought with them their cherished silver ‘cleek’ which had been specially commissioned for the very first opening event in 1895.

It had been rescued after the fire which had destroyed Antrim Castle in 1922 and had been cared for by succeeding generations of the Massereene family.

The official 100th birthday party, complete with a fireworks display, was enjoyed by members in August 1995 all of whom received a commemorative copy of the 100 year history of the club, researched and compiled by John Logan relating the story of the Club from its beginning when some local golfing gents approached Lord Massereene to start a golf course on part of his sprawling estate.

There have been changes down the years, of course.

During its existence, there have been no fewer than four different layouts of the course.

The first 18 hole layout was short-lived and a nine hole course was in use for about thirty years until 1927 when the ‘Sand Field’ - currently the 10th, 11th and 12th holes - became available on the other side of the Lough Road and a new layout was developed.

In 1939, the club took up the offer to buy the property from the Massereene estate.

Expansion to 18 holes was completed in 1964 after the Club purchased the adjoining 56-acre ‘Fir Field’ and engaged the golf course architect Fred Hawtree to design an additional nine holes, now the first nine.

In 2004, water hazards were added on the 15th and 16th, which are close to the Lough shore which is designated as an area of Special Scientific Interest.

More recently, a new shed has been built to accommodate the green keeping equipment, some new teeing grounds have been added and extensive drainage has been carried out in some areas to maintain playable conditions in the seemingly wetter weather in the last few years.

The small clubhouse was built in 1901, attractively positioned on its elevated site to give an uninterrupted view over the course to Lough Neagh.

It has was retained as part of the professional’s shop when a new clubhouse was opened in April 1974.

In 2000, members agreed to a complete redesign and build of a new clubhouse which was opened in the spring of 2001 by Peter O’Hara, long standing member, Past Captain and President, and former President of the Golfing Union of Ireland.

Massereene now has one of the most beautiful clubhouses in Ireland with superb panoramic views over Lough Neagh to the Sperrin mountains.

The Club has excellent bar and dining facilities enjoyed by members and often praised by visitors.

The Professional’s shop is now run by David Hughes who took over as the Club pro in April 2011 when Jim Smyth retired after over 30 years of dedicated service to the members and visiting golfers.

Massereene Golf Club received recognition from the golfing and Tourism world when it was awarded The Hidden Gem award as a must play destination in Ireland.

And such a gem inevitably lures in the visitors who want to see it shine.

In the golfing scene, the Club has regularly hosted some notable tournaments.

The British Blind Championship were held there in 2008 and 2009.

The British Girls’ Open Amateur Championship took place over a week in August 2014 attracting a huge entry of talented young players from across the world, with their families and followers.

After a week of spectacular play, the eventual winner was Alejandra Pasarin from Spain who overcame her German opponent Chiara Mertens by four and two in the final.