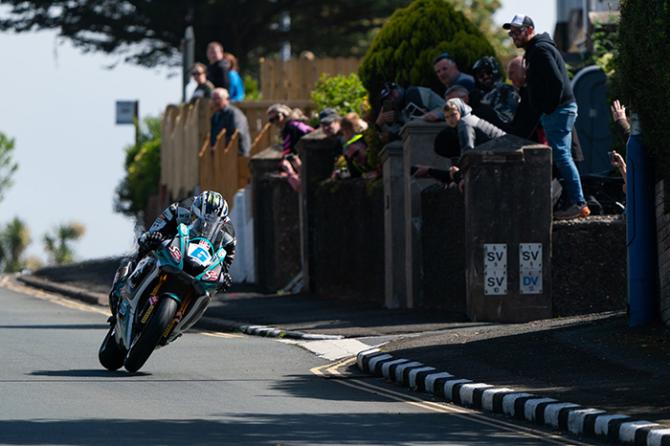 BALLYMONEY man Michael Dunlop became the most successful 600cc rider ever at the Isle of Man TT Races fuelled by Monster Energy, as he claimed his ninth supersport win in the Monster Energy Supersport TT Race 2 on Friday morning, his 21st TT win in total.

Riding the MD Racing Yamaha, Dunlop was locked in battle all race, again, with Peter Hickman (K2 Trooper Beer by PHR Performance) but edged away on the second and final lap to eventually take the win by 3.2 seconds, whilst Dean Harrison (DAO Racing Kawasaki) finished in third.

With a few damp patches around the course and windy conditions all round, it was Dunlop who led through Glen Helen first time around but only just with Hickman only 0.158 seconds in arrears whilst Harrison was third, a further 1.9 seconds behind.

Davey Todd was another 1.2 seconds back in fourth on the Milenco by Padgett’s Motorcycles Honda closely followed by Jamie Coward (KTS Racing powered by Steadplan) and Lee Johnston (Ashcourt Racing) with two seconds covering the trio.

Davy Todd maintained fourth place to the end, his eventual margin over Coward 6.4 seconds, with Cummins in sixth ahead of Hillier, Herbertson, Browne and Paul Jordan.

Hind just missed out on the top ten in 11th with Rob Hodson, Ian Hutchinson, Michael Evans and Michael Sweeney completing the top 15.

Much more on this and TT week in Tuesday's Chronicle newspaper.