The hills are calling as Irish Tarmac heads for Donegal 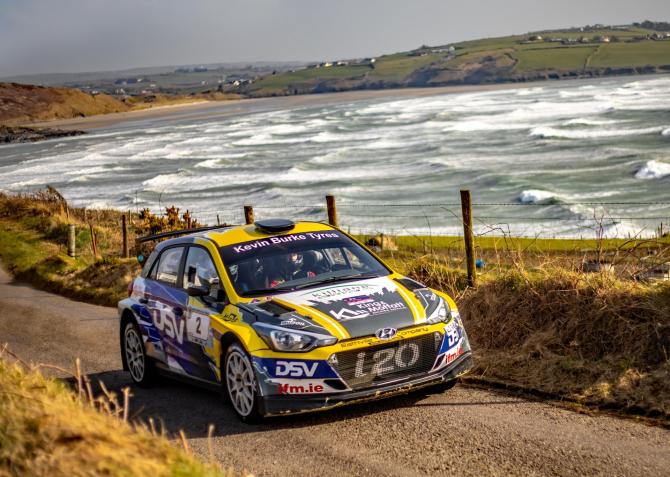 After three years of waiting, the Donegal International Rally is almost upon us. Three days and 300 stage kilometres lie ahead of an incredible list of Acesigns Irish Tarmac Rally Championship competitors.
Donegal’s 200-plus entered crews hint at the spectacle on offer across the 20 competitive stages.
Josh Moffett and Andy Hayes remain the crew to chase at the head of the Acesigns Irish Tarmac Rally Championship standings. Moffett leads ITRC by 21 points over Callum Devine after racking up two wins and two runner-up finishes in the first four rounds of 2022.
However, ITRC's policy of crews dropping their two lowest scores would reduce that gap to five points.
Alastair Fisher and Gordon Noble will also benefit from dropped scores. They have shown a renewed turn of pace since the Circuit of Ireland, sealing their second international win on the Ballymena based event.
It looked like Fisher would go two from two in Killarney but a slide into the Kerry bocage on his final stage shootout with Devine instead had him leave Kerry with his first non-finish of the year.
Moffett, Devine, and Fisher have really upped the ante on recent Irish Tarmac rounds. While ITRC remains their main priority in 2022, a maiden Donegal win would be hard to resist should they find themselves in the mix.
Moffett failed to challenge for a win in Killarney but his assured drive through the barren mountain passes was rewarded with a runner-up finish.
The 2018 Irish Tarmac Champion has cruised to two national rally victories since and is showing no signs of slipping up on his double campaign this year.
Cathan McCourt, Meirion Evans, and Jonny Greer complete Donegal's leading ITRC contenders. All three drivers have shown they have the ability to set stage-winning times in international rallies this year.
The Citroen and Volkswagen pilots head what is a very strong second half Donegal Rally top ten.
Josh Moffett’s brother Sam is back to defend his 2019 Donegal Rally win but this year’s number one seed is out of ITRC running as he drives a World Rally Car specification Ford Fiesta.
The Acesigns Irish Tarmac Rally Championship welcomes back Garry Jennings and Rory Kennedy to the series after missing the past three rounds. The multiple Donegal winners scored a solid fourth-place finish on the season-opening Galway International Rally.
They’ve been enjoying getting more asphalt experience in the right-hand-drive Ford Fiesta R5 and will attract plenty of interest in Donegal.
Leading Rally4 crew Eamonn Kelly and Conor Mohan step up into the leading class on Kelly’s home rally, manning a Volkswagen Polo R5 for the third time this year.
Another young local hoping for a good run in Donegal is David Kelly. He’s seeded 17th in his Fiesta R5 after battling through a variety of issues on the three ITRC appearances he has made so far.
Jason Mitchell, Stuart Biggerstaff, and Colin O’Rourke are just some of the other Rally2 drivers ready to tackle the best Donegal has to offer this weekend.

Modified
The Acesigns Irish Modified Tarmac Rally Championship’s four winners from its four events so far this year are all heading for the hills this week. Gary Kiernan, James Stafford, Daniel McKenna, and Kevin Eves will face stiff opposition to claim the coveted National Rally crown in Donegal this year.
McKenna is currently tied with Simon Reid on 31 points at the top of ITRC’s modified standings. Reid is gunning for glory in Donegal along with ITRC’s fourth, fifth, and sixth-place drivers Colin Byrne, Gareth Black, and Conor Murphy.
Stafford sits third in the modified standings having set the pace in West Cork and Killarney before his Darrian cried enough on the latter.
Kiernan and Eves lie down at the bottom of modified’s top ten but with 17 points to their names, a couple of strong results would put them right back in the mix with the leaders who only have 14 more points.

Historic
If you want an enticing series to follow, look no further than this year’s battle for the Historic Irish Tarmac title. Luke McCarthy and Brian Duggan currently lead the drivers’ and co-drivers’ standings with 53 points.
McCarthy will miss the presence of his two nearest rivals in the championship as Maurice Meskell and Neil Williams opt out of Donegal. Two points is all that separates ITRC’s top three historic drivers.
Fourth, fifth, and sixth-placed drivers Craig MacWilliam, Berian Richards, and Duncan Williams all head to Donegal within striking distance of championship leader McCarthy.
With three rounds left, this championship is all to play for.

Junior
Over 20 junior crews will tackle Donegal’s six stages on Sunday’s final day of action. Killarney’s Jason Farrell leads the standings by eight points over Ryan MacHugh. MacHugh and co-driver Declan Boyle will be hoping to assert some power into their Donegal assault, it is after all their home international event of the year.
Robbie O’Hanlon and Liam Egan remain in the Junior title race in their Honda Civic although a big score in Donegal is a must if they wish to catch leader Farrell.
The Donegal International Rally kicks off with a Thursday evening ceremonial start in Letterkenny before six stages on Friday, eight stages on Saturday, and a final six on Sunday.

* Reports from the Donegal International Rally in next week's Chronicle newspaper.