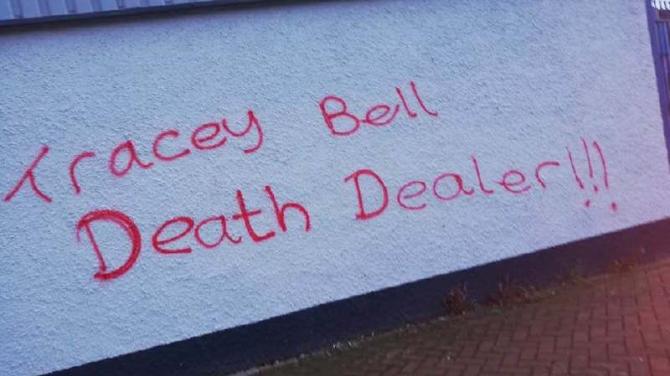 THE Antrim woman who has led a very public fight on behalf of Ulster’s addicts has condemned the emergence of graffiti apparently linking her to the drug that claimed her brother’s life.

Tracy Bell has fiercely denied any links to the drugs trade - and added that it was ‘doubly hurtful’ that it was daubed on business premises close to her home just a few days before Christmas.

“I’ve made no secret of the fact that I do the work I do because my brother Gary died as a result of a heroin overdose. It’s something I’m passionate about because I don’t want to see another family forced to go through what we did,” she said.

“This is always a hard time of the year for people who have suffered a loss, but it’s worse when you see ridiculous messages like these scrawled on the walls.

“How could anyone say that I deal heroin after all my family have gone through?

“Anyone who knows me knows that these claims are completely without foundation.

“If I am some sort of dealer, why would be pulling up outside people’s homes in the dead of night to take them to rehab?

“Why would people approach me day and night crying out for help?

“They know I am serious about what I do.

“I’m there to help when things go wrong. I’m part of the solution, not part of the problem.”

And that certainly seemed to be echoed when the images appeared on social media on Thursday. There were scores of messages of support - and Tracy admitted that she was ‘tremendously heartened’ by that.

“I was very touched when people spoke out against the people who did this. Very touched,” she said.

“I knew it was nonsense, but you always wonder if people see it and think ‘there’s no smoke without fire’. I’m glad people have seen it for what it is.”

Tracy added that claims she had ‘got Chucky on the gear’.

That is a reference to Steven Thompson, whose battle against drugs formed the central part of the hard-hitting BBC documentary ‘Life and Death on Heroin’ earlier this year.

Tracy got him a place at The Hygrove and the film followed him as he went through withdrawal and rehab.

Though he later relapsed and spent some time homeless on the streets of Liverpool, he publicly thanked the local woman for giving him an opportunity to beat heroin once and for all.