Christine Doherty, the former postmistress who has certainly made her mark in Randalstown 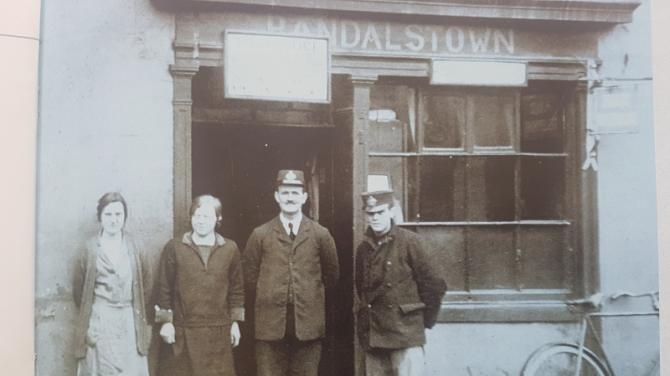 IT was 1971 when Christine and Danny Doherty took up their roles at Randalstown Post Office on Main Street.

Christine had grown up just a mile down the road and had been working in the Ballymena GPO when she met her husband in the Belfast GPO.

Back then, there was a very small area for customers with a larger area behind the counter - and the first thing the couple did was reconfigure the space to be much more user-friendly.

They went on to build up what was once known as one of the best post offices in the UK.

The Post Office has since closed and moved into a local supermarket, but a set of old weighing scales sits just inside the front door of her home and the hallway is full of historical memorabilia.

The shop unit itself is now rented out, but a big old-fashioned post box still stands guard right outside the Doherty’s front door.

The historic home dates back to the 1700s, being one of the oldest buildings in the town - and even boasts original roof beams.

“We took over on July 1 1971. It was a long weekend and during the Twelfth period, so we set about changing things.

“When people first came in after the renovation, they thought they had come to the wrong place, they couldn’t recognise it!”

In those days, the Post Office was a community hub, where people came on a daily basis, and plenty of gossip was swapped.

Danny and Christine could also be regarded as an extra emergency service - with so many elderly customers, they were able to keep a close eye and notify family members if anything seemed out of the ordinary.

“We were often the first ones to notice the early signs of ill health,” said Christine.

“If someone came in for their pension on the wrong day, or did not turn up at all, we were able to tell that something was wrong.”

Danny also had the unenviable task of delivering telegrams - some bearing bad news.

In those days, the Old Bleach was at the centre of the town in every way, as a major employer and contributor to the local economy.

“The parcels of linen were beautifully packaged and were all stacked along the walls, waiting for the postman to come,” said Christine.

“It was a big loss, in terms of jobs and skills, when it closed.”

The couple were lucky not to be targeted by robbers, until one incident just before their retirement in 2005.

Danny said: “They were targeting the van and did not get as far as us thankfully.

“One ran in and garbled something and then another one came in behind him with a gun and waved it at the guards.

“The only box they managed to take ended up being full of electricity cards, which wouldn’t have been much use.

“They drove off and one of them was in the back, trying to force open the box.

“When he did, of course there was dye in it, and witnesses told of how they saw a car speeding away from Randalstown spewing red smoke!”

During the 70s and 80s, the businesses in the town were family run and everyone lived above their own premises.

This sense of community still pervades and helped to hold Randalstown together during some dark times in the past.

“We came in 1971 and the bombs started later that year,” Christine said.

“We were knocked up by George Patton, a policeman, and were told to get out the back.

“We went down to the bottom of the garden and handed our then three-month-old daughter over the hedge to the Dalys, our neighbours, and then we all drove to Wallace’s Home Bakery, which was far enough away, and waited for the bomb to go off.

“We returned to complete and utter devastation.

“There was no reason for it, just to get maximum destruction.

“A lot of the historical features of the old town were destroyed, there were six bombs at one end of the town.

“It wasn’t until years later when grants and listing became available that some of the buildings were repaired.

“The roofs would lift off and come back down again.

“That bomb must have been 100lb, the force was terrible.”

Christine continued: “Back at that time, car bombs were the big worry.

“We used to have midnight phonecalls with one another, all of us who lived on Main Street.

“Is that a strange car, who was that out on the street just now?

“It was pretty stressful, but we got through it.”

During the Ulster Workers’ Strike, like many local people, there was worry over whether there would be enough electricity to cook the dinner, or petrol to drive the car.

Whist a bonfire was lit by protestors outside the Post Office, there was no major trouble.

One major development from those times was the forming of the Chamber of Trade in Randalstown.

“It was a way of bringing everyone together and helping each other, it was a calming force,” explained Christine.

“When peace came in the 1990s, the ARCHES community group was developed as an off-shoot of the chamber and it has gone from strength to strength.

“With peace came foreign investment and European grants and cross-community projects which helped improve the town, like the restoration of the viaduct and walkway, with the motto ‘Bridging the Divide’ - I chewed my pen a lot over that one!

“The ARCHES group was particularly good at drawing down funding for local improvements.”

Another development was the local historical society, of which Christine was Chair, as well as being the first secretary of the ARCHES group.

Danny was Chair of the Chamber of Trade.

“I think it helped that in Randalstown and even in old Antrim, everyone knew everyone else and we knew all the right people for the right jobs, the whole community played their part.

“It also meant that nobody could get up to no good and then go and hide in a hedge - everyone would know you!”

Another sub-group from the Chamber was Tidy Randalstown.

“With Tidy Randalstown, we involved not only the local community, but people from outside too,” said Christine.

“The town had changed, people from outside had bought businesses and premises and we invited them to get involved in things like watering the flowers.”

The hard work of the group has helped Randalstown scoop armfuls of national and international ‘best kept’ awards, with volunteers aged from 11 right up to senior citizens.

“So many people bypass Randalstown, but it is such an interesting place,” she said.

“Part of the tours will include visits to local shopkeepers, visitors can sample produce and will be invited to buy something to take home.

“It’s not just for tourists - there are people living in Randalstown and the surrounding areas who have come in from abroad or other areas of Northern Ireland and we want them to be part of this experience of getting to know the locality too.

“One of the most important things is getting people into the shops and supporting the traders.”

A big passion for Christine is Shane’s Castle and the O’Neill family heritage.

The estate dominates the road from Antrim to Randalstown and its imposing gates are one of the first sights for any visitor.

“There was so much interest in the O’Neill heritage that I got involved in setting up the O’Neill Summer School,” said Christine.

“It has changed format over the years, but interest, particularly from overseas, is still strong.

“We are now planning an O’Neill Trail, which will be a four-day trip starting in Castlereagh, ending in Donegal, where the Earls left.

“There is such a strong attachment to the name and the history, especially in America.

“You could put one advert in one overseas publication and be flooded with applicants.

“It is something people are very proud of, something they want to explore. It is definitely still a big draw.

“Participants on the Summer School can also enjoy a tour of the estate and afternoon tea in the Railway Cafe in the grounds.

“The O’Neills and the Shane’s Castle estate are just so intrinsically linked to Randalstown and the history is fascinating.

“Lough Neagh is starting to be promoted as a location to visit and enjoy.”

While Christine appreciates that recent Public Realm investment has improved the image of the town centre, for traders, it has come at a cost.

“Oliver Kearney, the local shopkeeper, has been very strong in keeping all the local traders together,” she said.

“The works did have an impact on passing trade and footfall, and the closure of the M22 for roadworks compounded matters.

“We are realistic, while we know that we have a strong independent and family-run offering, we also know that retail is not going to save the town.

“Tourism and getting new people in is the way forward, we have a rich history here and interesting stories to tell, we have a beautiful backdrop, we need to get more visitors.”

Christine is pleased that despite some big changes for Randalstown, the community can still pull together.

“I know when Danny and I retired, people were upset and asked why we did it,” she said.

“It is just the way of the world, the move towards online business has really changed the Post Office.

“There is no bank in Randalstown, the police station closed, Old Bleach closed, these are major losses for a small town to take.

“But with organisations like the Chamber of Trade, ARCHES, the Historical Society and Tidy Randalstown, we are still able to help and support each other and help bring good things to this area.”