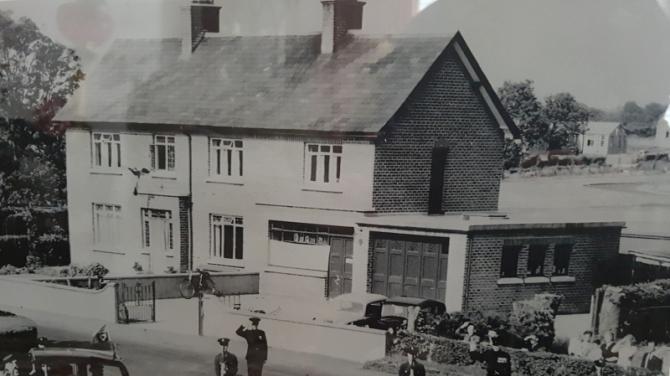 GROWING up right beside RAF Aldergrove, David Whiteside had a childhood that could have come straight from a Boys’ Own adventure.

A picture from 1926 shows his family home, with thatched roof, on the edge of the old aerodome, with bi-planes in the foreground.

Once that roof started to leak, the family built a new home, which went on to become the chaplain’s quarters when the base later expanded.

David’s parents ran a grocery shop in Aldergrove and his father had a delivery van, on which he loved to hitch a ride during his summer holidays as a child, when he attended Killead School.

Mr Whiteside senior also delivered coal, although in the war years, often a drive to Belfast would result in the news that a German submarine had put paid to that day’s delivery.

He remembers the first African American soldier to come into the shop. “He was a lovely man, he gave me a model aeroplane.”

Davy was the baby of the family, with one older brother and two sisters.

He describes himself as ‘a troublemaker’ who frequently had to be retrieved from the roof and was often left behind when the family went to church, as he was ‘too noisy’.

His bedroom window in the new house looked straight on to the offices and stores where he would work as an adult.

David recalls the Americans rolling in to Aldergrove in their tanks during World War 2, cutting up the country roads and barking at him to jump into the hedge, lest he be run over.

In such close proximity to the airfield, he was witness to a number of tragedies.

He was just eight years old and was riding his bike around the yard in July 1941 when a Bristol Blenheim decided to take a low run over the airfield at high speed.

The plane collided with a support wire leading from the Squadron Commander’s flag pole.

David saw the aircraft swing to the left, flying across the Aldergrove Road at three to four feet, killing an airman walking on the road, then flew into the NAAFI, killing all three crew and six female employees.

“I remember that the flames were horrific and the scene was just bedlam for the rest of the day, and for days afterwards.”

On one of those Sundays when the family had gone to church without him, leaving him in the care of his big sister Elsie, Davy became embroiled in another drama.

“I think I was aged nine or ten, it was a very foggy day and I slipped out of the house, went along the road from Crumlin to Antrim and was sitting at the bridge watching the runway when a Hudson came in to land,” he said.

“I learned later that it had been trying to take out a refuelling submarine.

“They were sending up rockets to help it land, red, green and yellow.

“There was an officer walking up the road as well and he was watching too.

“However the Hudson was badly damaged by the German guns and started to come down in the middle of the runway.

“The landing gear came up through the bottom of the plane.

“An engine went on fire and flew right off.

“Eventually it came to rest and the officer told me to get away as it was all going to go up, but I went with him.”

One pilot and a tail gunner had already perished, but between them, the officer and David bravely managed to assist the rescue of the remaining casualties.

“I was only small so I was able to crawl into the holes and small places after the fuselage was crushed,” he said.

As medics with stretchers and firefighters descended on the scene, David, who had gathered up some paperwork, was brushed aside as he tried to hand it over to anyone in authority.

“I gave up, I knew there were logbooks, so went home and put them into my schoolbag to show my mates on Monday morning.

“Later on the fires were put out and guards were stationed around the plane.

“However, the officer must have given the game away.

“When my parents came home later, my dad took me for a walk and asked me if I knew about the crash and if I had been there or knew anything about it..of course I did.

“I knew by the look on my mother’s face when we got back that something was wrong. She said that men had been to the door and they would be coming back later for the logbooks, which were very important.

“So I gave it all back and as a reward I was allowed to go to the cinema at the base for a whole week.

“I never saw the officer again or found out his name.

“It seems so funny to talk about it now. We were both in a lot of danger, I was just a young boy, I could have been killed.”

As an adult, David was also instrumental in bringing the family of Gordon Fraser, an airman who was killed in the Halifax crash on the shores of the Six Mile Water in Antrim in 1944, to the scene of the crash in the town back in 1995.

David trained as a plumber and worked at Langford Lodge after the Americans departed, noting that it had been left in ‘a bit of a state’.

Davy met his wife Evelyn, from Dundrod, at a dance in Antrim’s Protestant Hall.

He and Evelyn have enjoyed many trips all over the world, with particular fondness for Australia and Canada, and in later life have enjoyed visits to their favourite spots in Bushmills and Portbraddan.

He has found memories of old Antrim town, particularly Ivan Gillespie and his shop.

“You went in to buy two nails and you came out with a bucket of them!” he recalls.

A keen fan of motorbikes, among his extensive collection of photographs is former landlady of the Dunadry Inn, Mrs White, perched on the bike of motorcycle racer and RAF bomber pilot Len Graham.

The bike had its rear wheel shredded during a race at the Ulster Grand Prix.

He also worked for the Supply Squadron at RAF Aldergrove, retiring in 1997 after 41 years.

On his retirement, Group Captain KW Ifould encouraged him to write a memoir, which Davy hasn’t yet got around to.

His knowledge of the station and its history was described as ‘without equal’.

Along the way, Davy has picked up many awards and citations, including the MBE and Imperial Service Medal, and met a few celebrities too.

“The Duchess of Kent said to me that I didn’t look old enough to retire,” he said.

“I said ‘I don’t feel ready to retire’ and she became very concerned and assured me she would fight my case.

“My boss slapped my backside for that!

“I met Mrs Thatcher - but she was only going to go to use the ladies after a flight, accompanied by her security men.

“Linda Lusardi was doing a shoot for The Sun in Belfast and then went to the Deerpark Hotel and I had to look after her.

“She was great craic.

“Aldergrove was a brilliant place to work. I made so many friends, I met so many people, I have so many stories.”

Often he visits friends at care homes in the borough and is often asked to regale the residents with some wartime tales.

“Sometimes I pop in something controversial and I come back the next week and they are still fighting about whether what I said was right or not!” he laughed.