Mrs MacKean is still the lady of the manor 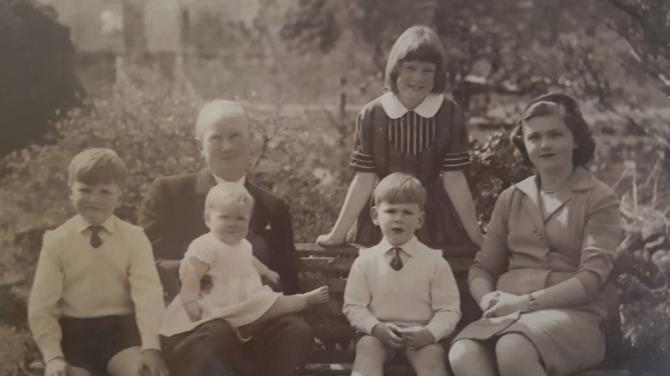 PATRICIA MacKean moved to Northern Ireland in 1950 from London, via Scotland and in her own words: “I wouldn’t go back!”

Approaching her 90th year, ‘Mrs Mac’ as she is known to her friends, was one of eight children, four girls and four boys, her father a banker in the City of London.

War saw the family evacuated to Scotland, but the young Patricia was not to know that the conflict would shape her future in ways she could never imagine.

As the family moved around a lot, she attended eight different schools, both as a day pupil and a boarder, but one which sticks out in her memory is St Leonard’s, a school formed by the University of St Andrew’s

“Scotland is the coldest place on earth and it was particularly cold during the war,” she recalled.

“I hated school, there were so many petty rules, I suppose you could have called me a bit of a rebel.

“I remember up at St Andrew’s on Sunday nights, the headmistress used to read to us out of a book and during a pause, I put my hand up and asked if I could go upstairs and get my cardigan as it was so cold.

“She replied: ‘The children in Russia don’t have cardigans!’ and I said: ‘But I do have a cardigan and it is upstairs!’ - I just remember how stupid an argument that was for an adult to make to a child!”

At 18, she attended a wedding in Scotland and met her future husband, George MacKean.

His parents had bought Loughanmore House on the outskirts of Antrim in 1920 and the estate and farm had been due to be inherited by his older brother, Muir.

However, he was tragically killed in the war and George, who had also been a regular soldier, was next in line.

Motorists who zoom up and down the M2 on a daily basis are perhaps unaware of the history that lies beyond those walls outside the village of Parkgate, maybe just catching a glimpse of a clock tower in their peripheral vision as they make their way to and from work.

Loughanmore was built in the late 1700s for Charles Adair and was enlarged and castellated in 1880.

The entrance was dominated by a remarkable five-storey porch-tower with a spire, rising high above the rest of the house.

A lower tower, also with a spire, stood at the other end of the house.

General William Adair sold the house to Charles MacKean in 1920 and it was subsequently remodelled to the designs of Guy Elwes who demolished the front tower and built a new dining room in 1936.

Further changes were made in 1961 when the top storey and battlements were removed.

The front part of the house was finally demolished in 1988.

The former stable block coach-houses and outbuildings survive as components of what was to become the current house.

“George and I married when I was 20, which seems awfully young by today’s standards,” says Mrs MacKean.

“At the time I wasn’t daunted at all by moving to Northern Ireland. I was used to moving all over the place, it was normal for me.

“What I was daunted by was the fact that I had always done everything for myself, and now there were five indoor staff and 11 outdoor staff - I didn’t know what to do with myself!”

Loughanmore, she agrees, was an idyllic place for their five children to grow up.

George and his business partners diversified, setting up a grass-drying business which supplied to major animal feed companies - a big innovation in those days.

As farming changed and the grand pile became more of a challenge to maintain, the family faced some tough decisions.

“When my husband died I decided I would have to make the old house smaller, but when the builders came in they found that the mortar had turned to sand - there was nothing they could do.

“So the only thing we could do was convert the stable blocks into two houses.

“When my son decided to give the estate up, I moved to Little Bush, one of the farms that George had bought and rented out.”

Mrs MacKean now lives in the grounds of the farm and can still see Loughanmore from a panoramic window.

Her daughter Georgia lives in the main farmhouse.

She is full of praise for the new owners of the estate.

“They have spent a lot on bringing everything up to scratch, things that we could never afford to do. It is wonderful to see the changes they have made, I take great pleasure in seeing what they have done with the place and of course, I can still see it from my living-room window!

“It is most important to me that Loughanmore is loved and cared for.

“It was just such a lovely place to live and the current owners still allow the family to use the grounds to exercise the horses.”

The present owner is involved in racing - opening the estate for point to point meetings and cross-country events - and Patricia’s own family still have an important equine interest just outside the gates of the estate - Sweet Wall Stud.

Sweet Wall is the name of the road on which the stables sit - whether it is named after the wall which surrounds the estate, a racehorse or a ‘sweet well’ - that’s Mrs MacKean’s theory - has never been proven.

George’s father Charles owned and bred racehorses, but after the war, George decided to give up ownership and it wasn't until 1985 the family got back into thoroughbred breeding again.

Perhaps the most famous product of this line was Florida Pearl, who retired a Euro millionaire in winnings and the first horse to win four Hennessey Gold Cups at Leopardstown.

Georgia helped revive the family tradition and her daughter Lucca has now taken on the mantle as the fourth generation of the family making their name in the horse world, through eventing and dressage, with both mother and daughter enjoying huge success nationally and internationally.

There is also a successful livery yard where competition and leisure riders keep their horses.

But Mrs MacKean’s favourite on the yard over the years isn’t who you would expect.

“Georgia’s first horse was a great big plain mare, originally from Ireland but bought in Scotland,” she said.

“She was no oil painting, she was a great lump of a mare, but she did wonders for Georgia and we have several young horses descended from her.

“It can be difficult for youngsters to transition from ponies to horses but this one made it so easy.

“It is lovely to say that as well as a human family keeping this tradition alive through the years, we also have an equine family as well.”

Mrs MacKean still has two older sisters - one aged 98 and the other aged 90 - living in London.

Of her four surviving children, three live in England and she has 13 grandchildren and three great grandchildren.

Outside of her outdoor interests, she also volunteered for the Northern Ireland Hospice for many years and loved to sing in the church choir, being a regular attender at both St John’s in Donegore and St Patrick’s in Templepatrick.

“The acoustics in St John’s are fantastic,” she said.

“It is a very special place, anyone who has visited it will never forget it.”

The family has a strong connection to the parish.

Following Henry Adair's death in 1887, a chapel was created at Loughanmore out of a coach-house, in the mid-to-late 1890s, to the right of the clock tower.

The chapel was converted to domestic purposes in about 1984, when the stained-glass windows were removed to St John’s, and the entire front block was renovated to become the main residence on the estate.

It had an organ, communion table, reading-desk, chairs, and a communion service of silver.

Indeed, Mrs MacKean has left her own indelible mark on the historic church.

One of her daughters was a volunteer who ‘planted’ some of the 888,246 ceramic poppies for the iconic ‘Blood Swept Lands and Seas of Red’ art installation at the Tower of London in 2014.

Her dutiful mother purchased four of the poppies.

“But once they got here, whilst they were beautiful, I had no idea what to do with them!” Patricia laughed.

When it was noted that the church had no permanent memorial to those parishioners who had served on the battlefield, she donated her poppies, while local woodworker Albert Patterson made a display for them using oak from northern France.

Mounted against a handmade, framed roll of honour made in 1916 which names 43 men, connected with the Parish of Donegore, who served their country in the Great War, it made a wonderful tribute, which has been admired by many visitors, including Irish President Michael D Higgins.

To complete the circle, historical researcher Michael Nugent also compiled factfiles on each man on the roll of honour and others from the area who had not been included.

“It was the least I could do and it is a much more fitting home for the poppies than I could have ever provided myself,” she said.

“I am pleased that people can go and look at them and admire them and they will still be there for future generations to see.”