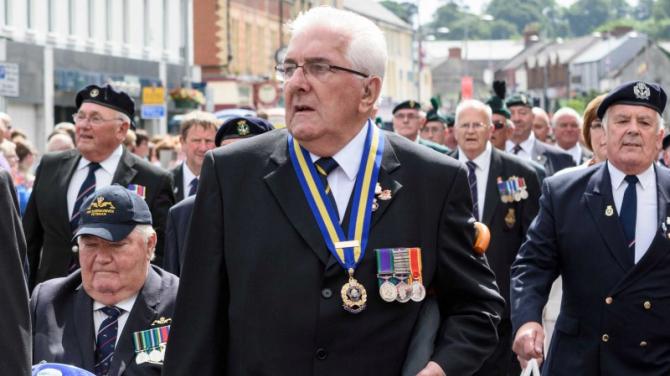 lONE of Antrim’s best known former servicemen is still a familiar face around the town at almost 83 years old.

Ron Harrison was born and lived for the first part of his life in Manchester.

“Manchester got its fair share of bombs,” he said.

“My father was in the army, he spent most of his time in Aden in Africa and he died young in 1959.

“If it was a one-off, local raid, the area siren would go, we had our own shelter so my mother and brother and sister and I would get into it.

“If it was a big raid, we would all go in a communal centre, the whole street would go into it.”

Ron saw some amazing sights as a youngster.

“I remember a German aircraft going into a barrage balloon,

“There was another German bomber with two Spitfires chasing it. One stayed off to provide cover and another one went after it and shot it down.

“Another time I was walking with my mother to the doctor and a German aircraft had run out of fuel and it was gliding down over a main road.

“It was so close, I was able to see the paint and the machinery. It was just out of the factory, brand new, and the pilot lifted it slightly, just before it crashed.”

There were five bombs at the bottom of Ron’s street and the centre of Manchester was razed to the ground.

“After the war, when things were getting back to normal, the factory horns were turned back on, 15 minutes before the people were due to start work,” he said.

“When we heard it for the first time, us kids ran and jumped into bed with our mother because we thought the war had started again!

“We had ration books, but my mother was great for baking and making things when she got a bit of extra sugar.

The children’s paternal grandfather was also a great source of support to the family.

Ron ended up at Aldergrove later that year and has been in Antrim ever since.

He met his first wife, the late Elsie Jackson, in 1957 and the couple were married in Manchester a year later.

The Jacksons were a well-known family in the Antrim area, particularly in Riverside and Muckamore.

Altogether, Ron worked at Aldergrove, mostly attached to the famouse Maintenance Unit, for 37 years and 15 days, and has now been retired for 20 years.

“I wanted to be a policeman in civvy street, but that didn’t happen,” he said.

“When I joined up, conscription was still in force in England, Scotland and Wales.

“The army was 29 shillings a week so I went to join the RAF police.

“Eventually I ended up in the fire service instead!”

Ron was appointed as the first civilian officer in the RAF fire service, an appointment made by the Home Office.

Aldergrove was like a town within a town, with thousands of employees, although Ron had the benefit of going home every evening.

Whilst there, he got the chance to see many historic aircraft.

“There were Shackletons, Hastings, Mosquitos and some of the early helicopters like Whirlwinds.”

What is now the site of Belfast International Airport - the airport was then located at Nutts Corner - was referred to as ‘the graveyard’.

“There was a vast array of aircraft from World War Two, American B29s and Shackletons all parked up.

“They were eventually sold off for aluminium.

“Aldergrove was also used as a staging post for the V-Force bombers - the Vulcan, Victor and Valiant.

“The V-force bombers would stop to fuel on their way to Christmas Island or Australia, they were so armed-up that a policeman always had to stand guard.

“I also had the honour of being locked in the hangar with Royal aircraft during visits.”

One aircraft particularly associated with Aldergrove is the Phantom.

“The Phantoms were bought in from America and they had the ejector seats and radar changed.

“During tests, they were tied down and because there was no battery, they were started on the ground with a generator which sparked a gas turbine which started the engine.

“Sometimes the gas turbine would go on fire, hence the fire service had to be on standby with fire extinguishers.

“The hearing protection was totally inadequate.

“The ear defenders were filled with an oil, which frequently leaked and gave you dermatitis on your skin.

“Aldergrove itself had a very good safety record. In my 37 years there were no major disasters and fortunately no fatalaties in the time I was there.

“I do remember a passenger plane making an emergency landing and it stopped on the runway for a mass evacuation for some reason.

“They did not want to deploy the chutes so we had to get them out on ladders.

“There was an old lady who must have been in her 90s who was very concerned that the firefighters might be looking up her clothes as she came down the ladder!”

There was an opportunity for some down-time too.

“Stars of the day would come over to entertain the troops,” he explained.

“There was Pan’s People, the dance troupe, Frankie Howerd from the Carry On films, the actress and singer June Allyson and comedian Jim Davidson, over the years.

“After the shows they would want to go from place to place or visit the mess, so they all got a ride on the fire engine!”

Ron has seen many changes in Antrim over the years.

“When I first came here, it was called a town, but it was more like a village,” he said.

“Years ago nobody wanted to come here.

“It was not a problem for me to go from a big city to Antrim. It was just nice to have a quiet life.

“Everybody knew everybody, which had good sides and bad sides!

“But all of a sudden, there were people from all over the place arriving in Antrim because of Enkalon.”

This included the family of Ron’s wife Margaret, who hailed from Derry and Donegal.

The couple have been married for five years.

Ron has one son, who is based in Antrim but works all over the world and he has also inherited five step-children from Margaret’s first marriage.

As part of a true forces family, three of Margaret’s sons, all in the Fleet Air Arm, served in the Falklands.

Ron is very well known for his work with the Royal British Legion, which he joined in 1969 alongside the likes of Peter Neish and Jack Allen.

“Back then, we had a prefabricated building, where the Jehovah’s Witness hall is now,” he said.

“This would have been in the early 70s.

“Enkalon presented the legion with their famous ‘five-star nylon’ carpet.

“We had an old pianola with air pedals and we got it repaired and could play old-time waltzes.

“After about six months we were able to make £100 in takings.

“On a Saturday night the pianola would start playing and people got up to dance.

“However, one night the committee stepped in and stopped it because they were worried that the carpet would get damaged.

“At that time, Enkalon’s claim to fame was that they had put a carpet on the floor at Victoria station as part of a big promotion and millions of people were walking over it, and here were about 18 people in the Legion hall trying to have a dance.

“Everyone had gone there to enjoy themselves, so they all left and went to the ‘Monty club’ at Massereene Barracks instead.

“I was invited to join the committee after that and I have been on it ever since.”

Ron is now President of Antrim British Legion and has held most of the major offices in both the club and branch over the years.

Outside of the military life, Ron has a number of interests including indoor and outdoor bowls, golf and fishing.

He also used to get a lot of enjoyment from stripping the engines of cars and motorbikes.

“Everything is so technical now.

“I just open the bonnet and say ‘oh my God!’ and close it again.

“I was fanatical about fishing a few years ago and I gave up the golf a while back because the weather was so rotten.

“I tend to have to stick to one thing, you can’t do it all at once, you have to give it your best shot.”

Ron is also a big fan of Facebook and can often be found playing the Candy Crush Saga game.

“Margaret used to ask me what level I was on every day,” he said.

“But then eventually she stopped asking me. When I realised, I asked her why she had stopped and I found out she was many levels above me already and she didn’t want to mention it!”

Twenty years into his retirement, Ron and of course Margaret are now relaxing and enjoying their holidays and spending time with their extended family, including their great-grandchild Ava.

“We have a good life, we are really enjoying it,” said Ron.

“I wouldn’t want to live anywhere else but Antrim. I love Antrim. I have thousands of memories.”