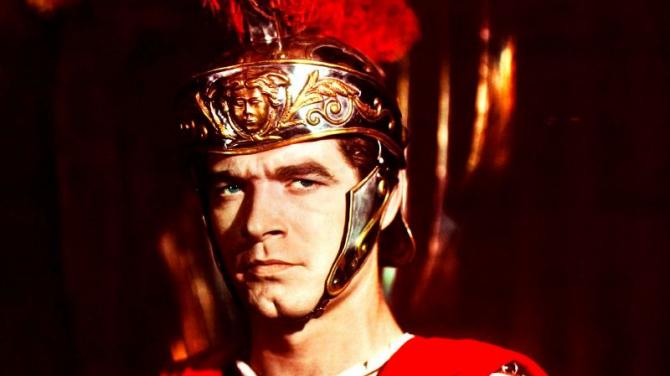 HERE in Northern Ireland, we love a good underdog story - especially when it revolves around a local.

When local celebrities are mentioned, one’s mind may jump to Liam Neeson, or Jimmy Nesbitt, or even the cast of the hysterically funny Derry Girls.

However, there is one name that is mentioned less and less over the years who may have the most glittering of all careers, and that belongs to Stephen Boyd.

Born on July 4 1931, on the Doagh Road, Whitehouse, Stephen Boyd (known as Billy Millar to those close to him) came from humble, but happy beginnings.

He was the youngest of nine children born to Alexander Millar and Martha Boyd, and moved to Glengormly with the family when they were but totes.

With the amalgamation of our local councils in recent years, that makes him an honorary Antrim man!

Boyd then attended Glengormley and Ballyrobert Primary, before hitting the books at Ballyclare High School until the age of fourteen. Taking on odd jobs, whilst balancing book keeping studies, Boyd nursed a desire for the stage, soon branching into the Ulster Group Theatre.

All of this may sound rather, well, normal - and that's the wondrous thing. Stephen Boyd came from the ordinary - his story is of the boy next door, who became a global icon.

Stephen Boyd’s first ‘break’ came through an unlikely role as a gravel-throated policeman on Ulster Radio's popular show, ‘The McCooey’s’. He proved to be quite the voice actor, and slowly began playing more characters within the programme.

By 20-years-old, he had begun working with the Clare Tree Major Company in America, and enjoyed a coast to coast tour, allowing the young Ulster man an experience of travel envied by many. In 1956, he treaded the boards as the iconic Stanley in A Streetcar Named Desire, a role he declared ‘the best performance I ever gave in my life’.

Moving to London, however, granted the little fish a massive pond of even more opportunity. After a fortuitous employment by Leicaster Square Cinema to usher in attendees during the British Academy Awards, Boyd was noticed by Sir Michael Redgrave, who introduced him to the head director of the Windsor Repertory Group.

From then on, Stephen Boyd began an illustrious career which would allow him to travel the globe, and even win one!

Stephen’s first role to bring him acclaim was as an Irish spy in ‘The Man That Never Was’, released spring 1956.

His next flick, ‘A Hill In Korea’, featured budding stars Michael Caine and Robert Shaw, and then the nautical adventure ‘Abandon Ship!’ which saw the British Navy building a 35,000 gallon water tank for immersion.

Around the same time, Stephen was then selected by leading lady - the world renowned muse Brigitte Bardot - as her lead man for ‘The Night Heaven Fell’.

Being linked to such celebrity further catapulted Boyd into the spotlight. This also began a sincere, (and often flirtatious in the eyes of onlookers), friendship between the two stars. Whispers that the pair were enjoying a steamy affair would later inspire Bardot’s husband to file for a divorce. Both, however, maintained the friendship was above board and born from mutual, innocent adoration. Of course it was!

In 1958, Boyd took his first steps in Hollywood as the leader of a renegade group of outlaws in the classic, ‘The Bravados’, starring Gregory Peck and Joan Collins.

Then, lightning struck - Boyd landed a career defining role in ‘Ben-Hur’ as the hunky Messala. The epic included a glittering roster.

The big lad from Glengormley was swiftly swept up to learn the not-so transposable skill of chariot racing in Rome, got fitted for incredibly uncomfortable contact lenses, and began the adventure which he would later call ‘the most exciting experience of [his] life’.

Interestingly, and rather modernly, Boyd was instructed to play the role of Messala with undercurrents of homosexuality to increase the tensions between the two lead antagonists, which led to several amiable quarrels between him and director William Wyler.

Nevertheless, Messala proved to become quite the sex symbol. Press columnist Erskine Johnson wrote, ‘A brass hat and the armor of a Roman warrior in Ben-Hur does for Stephen Boyd what a tight dress does for Marilyn Monroe’. In 1960 he won the Golden Globe Award For Best Supporting Actor - Motion Picture.

Boyd became known as ‘the new Gable’ in advertisements for his next lead role in ‘Woman Obsessed’, and his string of lead role offers began to pile up to the point he had to decline many - including the biblical epic, ‘The Story of Ruth’.

He was certainly not afraid to mix his film career with television appearances, taking on performances for the small screen as well as the big. One memorable occasion was when he appeared on ‘The Dinah Shore Chevy Show’ in the spring of 1960, where he performed ‘The Leprechaun Song’ and ‘Molly Malone’ as a nod to his heritage.

Boyd would appear on several shows, before taking on ‘The Big Gamble’ - which ironically proved to be just that, as filming proved to be rather dangerous.

The cast and crew slept in tents during the filming in Africa, in a jungle, allegedly patrolled by a cannibalistic tribe. At another filming location, Boyd almost drowned in the Ardéche River, having to be saved by co-star David Wayne.

He was initially chosen to play Mark Antony beside the dazzling Elizabeth Taylor in Cleopatra, but had to pull out after Taylor took ill for some months during filming. Yet in the period of wait, he attended the inaugural ceremony of the sound and light show at the pyramids of Giza, Cairo.

Boyd was again loaned out to MGM Studios to star with Doris Day in the circus musical ‘Billy Rose’s Jumbo’. The role earned Boyd yet another nomination for the Golden Globe Award for Best Actor.

Then, our Billy flew to Rome in the summer of 1962 to act with Italian superstar Gina Lollobrigida in her passion project ‘Imperial Venus’, a romantic epic about the many loves of Pauline Bonaparte, the sister of Napoleon.

This film was the first film to be banned by the Motion Picture Association of America for male nudity due to a humorous scene in which Stephen Boyd is shot in a bedroom with a sheet covering his lower body.

Next, ever busy, he arrived in Spain to begin work on Samuel Bronston's massive production of the ‘The Fall of the Roman Empire’. Boyd also had the opportunity to ride another chariot in this film - the skill proved to be more useful than one might initially have thought.

It was a box office failure in the United States and signaled the end of Roman epics in the 1960s, yet undoubtedly proved to gain cult following with the passing of time. ‘The Fall of the Roman Empire’ has since widely been recognised as being a major inspiration for Ridley Scott’s Academy Award winning movie, ‘Gladiator’.

As you might have realised by now, Boyd was no stranger to airports - he traveled widely for roles.

A trip to Yugoslavia saw him take on the title role in ‘Genghis Khan’, then Boyd jet-setted to Cairo for his short part as King Nimrod in ‘The Bible’.

Understandably, he eagerly took the opportunity to return to America for a period of rest. Rest being, working on the science fiction adventure movie, ‘Fantastic Voyage’.

Boyd would then globe trot once more for ten days in Iran to film ‘The Poppy Is Also A Flower’, by the famed Ian Fleming - the Bond author who was a frequent visitor to Shane’s Castle.

A lasting tribute to Boyd was that two of his projects were ranked among the top twenty-five grossing films of 1966; ‘The Bible’ at number one and ‘Fantastic Voyage’ at twenty-two.

In early 1968 Boyd was cast alongside big names Sean Connery and old pal Brigitte Bardot in the western adventure ‘Shalako’’, and then the role of a thoroughly detestable slave master Nathan McKay in the hit drama ‘Slaves’. Released during the Civil Rights movement in America, Stephen Boyd found himself making a political statement during the film’s premier by appearing alongside songstress Dionne Warwick in Baltimore.

Boyd was involved in Scientology, and became the first high profile actor to be involved in it following his interest in L. Ron Hubbard's sci-fi novels. In 1970, Boyd was actually the narrator of a Scientology recruitment film entitled Freedom - yet this video has since been removed from online Scientology resources.

During the 1970s the demand for Boyd in Hollywood diminished, so he focused his attention on European films and several television pilots.

Boyd continued to travel to a wide variety of locations to work, including Australia for ‘The Hands of Cormac Joyce’ in 1972; South Africa for ‘Control Factor’ and ‘The Manipulator’ in 1972-1973; Jamaica for the scuba diving adventure ‘The Treasure of Jamaica Reef’ in 1972, Florida for the television pilot ‘Key West’ in 1973, and Hawaii in his last acting stint as a guest star on the popular television show ‘Hawaii Five-O’ in 1977.

His most critically acclaimed role during the 1970s was as a colourful Irish gangster in the UK crime thriller ‘The Squeeze’.

Although he had seen so many horizons across the world, Boyd never forgot his roots.

He would routinely leave the land of the free to make frequent trips back to County Antrim to visit his family.

On one particular visit home in 1971, Boyd openly expressed his dismay about the political violence in Northern Ireland.

“Because of the divisiveness, the potential for displaying to the world all that is good in that lovely land is lost, perhaps even destroyed,” he said.

Boyd was so loved by those on this little green island, that during his visits he was given a military escort from the airport to his family home, and back again.

Sadly, Stephen Boyd died unexpectedly of a massive heart attack on June 2 1977, at the young age of age of 45. He had been playing golf with his wife Elizabeth Mills at the Porter Valley Country Club, in Northridge, California when he very suddenly passed away.

Boyd was cremated and his ashes were interred in Oakwood Memorial Park Cemetery in Chatsworth, California. His wife was interred with him once she too passed away, in 2007.

Stephen Boyd is also remembered on his parents’ grave in the Clandeboye Cemetery, Bangor. On July 4 2018, the Ulster History Circle commemorated Stephen Boyd with a blue plaque at Moygara, on the Shore Road, Whitehouse - where he was born.

Silver Screen Magazine in 1960 wrote, rather gushingly, a testimony to how revered Boyd truly was: he was ‘a supreme individualist, like most Irishman’, ‘a wonderful actor’, and ‘a man of tremendous vitality, a typical Celt’.

Although gone, his legacy continues on as a man who was loved on an artistic level as well as a very personal one.

A letter from film producer Euan Lloyd (who produced ‘Shalako’), offers possibly one of the most poignant sentiments about the young star.

He simply writes: “Stephen Boyd was one of the nicest, kindest people I have met in my lifetime, rare in this profession.”

And isn’t that wonderful? Amongst all the glitz and glam, all the success and fame, Stephen Boyd can be remembered as we all would love to be: kind.