Billy didn't know he liked school - until he had left! 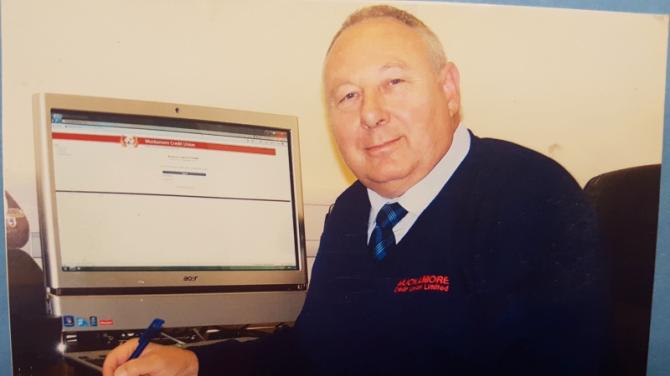 BILLY Carnwath has made his home in Antrim over the last 50 years, but like many local people, his life began in the north west.

He was born in the Waterside Hospital in Londonderry in 1952 and grew up in Gortica near Drumahoe, with his parents, two brothers and a sister.

“We ran through the fields, we fished and played cricket and football,” he recalls.

“The farmers didn’t mind us being around, if we saw a sheep on its back we would put it right, we may have robbed the orchard a time or two, but that was as bad as we got!”

“We never broke a pane of glass, we were good kids.

“The worst we did was use a catapult to break the delph things on the telegraph poles!

“We used to be interested in wildlife and look after the eggs in the nests.

“I never had a proper fishing rod but I loved it.

“We used to hang around the cricket grounds on a Saturday and if there was an away match we would stand with a pair of white gutties and if the players were a man short they would give us a lift, we went anywhere in the north west, I was only about 14 or 15, playing games with grown men.

“I think I even played in a cup final that way once!

“I was also big into my football. I played in school, and with the Boys’ Brigade and the Army Cadets.

“Some days I was playing three matches a day.”

Billy says he never knew he liked school, until he left!

“I was very emotional that day,” he said, recalling his final lessons at Faughan Valley school.

“And do you know, I have never seen a lot of my old pals since.”

Despite growing up in the country, Billy was still aware of the sartorial trends of the day.

“We were rural and we couldn’t wait to get out of school to go and pick potatoes for a few bob!” he said.

“But I would have died to get myself a pair of winkle pickers.

“When I was 15, I got myself a pair. They had heels and made a wonderful noise. I wore them everywhere.

“I was so proud, I would have nearly worn them in bed.

“I even wore them fishing.

“One day I went down to a place called Bessie’s Dam and I was fishing away but got too close to the edge and slipped into the water.

“There was nobody near me and every time I grabbed a bit of the bank, it came away in my hands.

“I eventually got out - minus one winkle picker.

Billy was offered three jobs after leaving school - an apprentice upholsterer at Stormont, Michelin in Mallusk, and a job at ICI (Imperial Chemical Industries) in Carrickfergus.

“I went to my careers master and he said I should take the ICI job, without question - it was August 1969, I was only a babe!” he said.

“I had never been away from home and it was a big challenge.

“I lodged with a Mrs Stafford in one of the old coastguard houses and she kept me like one of her own, she was a lovely woman.

“I was well fed and got a packed lunch every day.

“ICI was a great company to work for but it was not to survive and it went to the wall.”

In the interim, without his knowledge, Billy’s parents had relocated.

“I used to get the train back at weekends and sometimes my dad would give me a lift back up,” he said.

“One day he sent me word to get off the train at Antrim, but he did not tell me why.

“My father was unable to get work in Londonderry, and like many others, he came to Antrim because of British Enkalon.

“It was a big shock to me, because like I say, I never saw some of my friends again.

“Antrim was a ‘new town’, everything smelled of new paint, we were up at the Steeple estate, it was lovely and I made loads of new friends.

“I grew up four miles from the city centre. Antrim was a bustling wee town and all the traffic came through the town, there was a constant stream of traffic up and down, there were lots of wee shops and pubs.

“However some changes were made, not all of them for the better, and in the 1970s, the IRA bombs took their toll.”

But life went on for Billy and his family.

“I was lucky enough to then get a job in Shorts.

“It was huge, I couldn’t get over the size of it.

“The men looked like ants at the other side of the factory.

“I worked on the SD3-30 and I helped set the aircraft into the jig.

Billy recalls an amusing brush with Royalty while working at Shorts.

“The Princess Royal was coming to visit and the managing director, Sir Philip Foreman, was giving her a tour.

“We had the place spick and span, there wasn’t a bit of dust or a speck of dirt. Normally we were in dirty overalls and there was paint everywhere.

“We understood she would come into the aircraft by the front steps, I would welcome her and a couple of boys would be pretending to drill or put things together and she would leave by the back steps.

“There was a fellow called John Ruddle letting on he was working on seat rails and another guy giving an air gun a bit of a blast so she would think we were working.

“We all had lovely new coats and I was looking forward to greeting her.

“But in the end the visit was running over time and she didn’t come on to the plane at all.

“So she stood at the bottom of the steps and looked up at me, and I got a little starstruck and I couldn’t think of what to do, so I winked at her.

“And she winked back! I was expecting to get into all sorts of trouble, but I think Princess Margaret was very good fun and would not have minded.

“I still can’t believe I did that.”

Billy met his wife Valerie in the Protestant Hall in Antrim and can even remember which band was playing.

“We had a few dances and she was there the next week and I thought I would like to see her again as we clicked.

“She lived a stone’s throw from me in the Steeple and I walked her up the road but not to her house, and the week after that I walked her home.

“Then I asked her out to the new cinema.

“We married at First Antrim in 1974 and we have four daughters and two female dogs [Billy remembers getting the family’s first cocker spaniel from Anna McCabe’s pet shop at Ulster Bar Corner] so I am totally outnumbered!

“I just sit in the corner quietly and let on I am not listening.”

The adopted Antrim man is perhaps best known by people in the town for his involvement in the Credit Union movement, which continues to go from strength to strength.

He began as a teller at Muckamore Credit Union before being voted on to the board of directors and has been chair of the local branch, the County Antrim zone and the Northern Ireland Federation of Credit Unions, which recently held its AGM at the Dunsilly Hotel.

When Muckamore Credit Union opened for the first time on May 22 1992, the very first member was the late Jack McClay.

He was Chairman for 16 years and on his retirement, Jack became Honorary Life President of Muckamore Credit Union, a post he held and cherished until his much-mourned passing in March 2018.

Billy was the man to take up the mantle.

“I think every time I went forward for a chair’s position, Valerie asked ‘are you mad?’

“I have attended meetings all over Northern Ireland.”

Earlier this year, Muckamore CU opened their new premises in what was the old Bank of Ireland branch in Antrim - in the wake of recent closures of First Trust Bank and Bank of Ireland and the imminent closure of Santander’s Antrim branch.

Some of the people who started the credit union at Muckamore are still volunteering every week.

The High Street branch is staffed by Evadne Armstrong and Karen McGinley.

“We have come a long way in the last 27 years and with the continued help of the people of Antrim and Muckamore, who knows where we will be by 2046!” said Billy, adding that the Muckamore branch works in co-operation with Antrim Credit Union, which has long-established premises on Massereene Street.”

A ‘new knee’ means that Billy’s love of sport has been curtailed, but he enjoys spending time in his garden and greenhouse - adding that he made up hanging baskets for ‘half the town’ - and is known to dabble in a bit of DIY.

His skills were particularly in demand as each of his girls got their own homes.

“We have eight wonderful grandchildren and the girls got good jobs,” said Billy.

“One of my daughters lives in Australia, in Brisbane, and I have been out there five times. It is a fantastic place, if I had discovered it 40 years ago, I think I would have lived out there.

“I might not be from Antrim originally but it is definitely my home!”