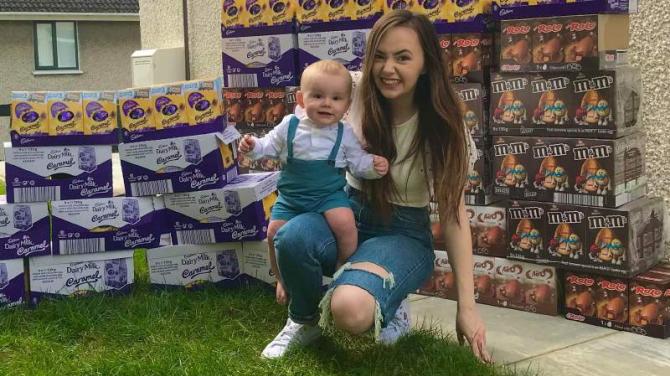 IT was an Easter Sunday like no other - but one kind-hearted local mum was determined to bring some cheer to the key workers battling to help locals through the worst of the pandemic.

Morgan Little has been deeply moved by the hardy souls who are helping keep the wheels of society turning, and while 10-month-old son Teddy keeps her busy she was determined to show her appreciation.

She has been working flat out making scrub bags and masks for all key workers to help slow the spread of the infection, often working late into the night.

When people heard of what she was doing they started donating fabric and even money to this most worthy cause.

But with Easter looming large on the horizon, she decided to do something special to say thank you to the tireless band of people working in the post office, our pharmacies, the Ambulance Service, the schools and the PSNI.

She ‘hatched’ the idea of distributing Easter eggs as a small gesture to show the esteem in which they were all held.

She sourced over 100 from Asda, and 300 more from Tesco which they generously delivered free of charge - after all, how was the 19-year-old going to get them all in her car!

Then, while observing social distancing guidelines, she delivered them to grateful key workers.

Her mum Liza Gordon said she was ‘immensely proud’ that Morgan had managed to bring a chink of light to dark times.

“Morgan has always had a heart of gold but she really has gone above and beyond,” she said.

“Last night on her way home she saw a bus driver and explained what she was doing and gave him one and said thank you.

“His reply was ‘I’m only a bus driver’, to which she replied ‘no you aren’t, you are a key worker and we all appreciate all of you’.”

Her selfless crusade has not gone un-noticed. Keen to return the favour, some have thanked her on social media. There have even been ‘shout outs’ on the radio.

But that was never was drove her, said her mum.

“She has been amazed by how many people have responded to this terrible crisis and she wanted to show her appreciation,” said Liza.

“She also wanted to show all the key workers that we are in this together and they have the support from us all.”

With many families forced to stay apart on Sunday, it was undoubtedly a very different Easter - but through her random acts of kindness Morgan has demonstrated that community spirit is alive and well.

And, more importantly, she has delivered a timely boost to the local heroes on the front line.