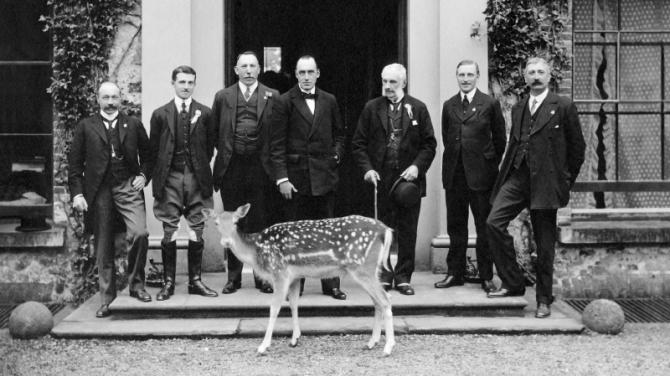 IT was a moment frozen in time, a night that helped galvanise a generation - and it unfolded in ‘loyal Randalstown’ just over a century ago.

With COVID-19 running rampant around the world, people today know something about a crisis which threatens our very way of life.

But back in 1912 many Ulster unionists were experiencing a very similar sense of impending doom - though the perceived threat was man-made.

On December 28, 1912 over half a million people had signed the Ulster Covenant, but even that impressive show of solidarity could not prevent the Liberals from pushing ahead with the Third Home Rule Bill, a controversial experiment in devolved government designed to transfer powers to Dublin.

Unionists were appalled by this challenge to their ‘birth right’ and led by fiery orator Sir Edward Carson the dark shadow of rebellion fell over Ulster.

Soon the barrister was traveling the highways and byways mounting his case against ‘Rome rule’ - and his words struck a chord with an increasingly isolated unionist community.

For many this was a life or death issue and soon thousands of men were marching behind the Carson cavalcade. The Ulster Volunteers were born - and they intended to be a force for change.

By September 1913 the roadshow rolled into Antrim.

In one day, the troop visited Ballyclare and Loughanmore, before enjoying a summery Garden Fete in the gardens of Antrim Castle.

That evening, however, they again picked up sticks to go onwards to the main focal point of the day - a UVF rally in Randalstown.

This unification of unionist discontent would later be noted by contemporaries as one of ‘the most imposing and enthusiastic’ rallies on record, which visually displayed as ‘proof of the solidarity of unionist feeling in the district’.

In the current climate, huge crowds already seem a thing of the past - but the one that gathered on September 20 was of epic proportions. The rally, said witnesses, had all the joviality of a fairground mixed laced with a good dose of civil disobedience. |It was a heady cocktail.

Carson and co rolled into Randalstown led by a Guard of Honour and a band from Grange Corner. The merry troop paraded past the baronial entrance to Shane’s Castle to a specially built platform which had been erected, right at the Market House.

One eyewitness to the event recounted how there were ‘arches carrying illuminated devices and inscriptions expressing a welcome to the unionist leaders and adorned with mottos indicating an attitude of uncompromising hostility to the proposals of the Government embodied in the Home Rule Bill’.

“The inhabitants themselves also participated in the display on Saturday evening and the illumination of the cottage windows with gaily coloured Chinese lanterns and rows of lighted candles provided a picturesque feature of the occasion, while the electric lighting, a system of which has been installed in Randalstown, was artistically brought into effective use in contributing to the brilliance of the display.

“At Shane’s Castle an illuminated arch carried in large letters the word ‘Welcome’. Further along the route the road was crossed by arches bearing the mottos ‘No Home Rule’ and ‘God Save the King’, while one crossed the main street displayed in illuminated letters the words ‘United We Stand’.

“The walls of the Market Yard were adorned with such inscriptions as ‘In God We Trust’, ‘Let the Government try to force Home Rule on Ulster’, and ‘Lead on, Sir Edward: We Follow’.”

The revered guests were then led by torchlight, joined in procession by Boy Scouts and nurses in immaculate uniforms, to partake in the meeting with the Ulster Volunteers.

The Ulster Volunteers stood at around 500 men strong. Peppered amidst them in the audience were several high ranking unionists.

Deftly weaving piety with politics once more, Carson preceded his address with prayers from Joseph McKinstry and a rousing chorus of ‘O God, Our Help in Ages Past’ led passionately by the United Protestant choir.

The speech was met with hysterical rapturous applause, punctuating each and every line spoken by their fiery leader.

“You have done me a great honour,” boomed Carson between interludes of crashing hands and cheers.

“Everywhere I have gone through Ulster I have had receptions which might thrill any man, and above all an Irishman.

“But I know, and this is what pleases me most, that while you wish to show me every kindness and every confidence, I know the real thing that is at the root of your enthusiasm is your fixed and courageous determination that never under any circumstances will you submit to a Home Rule Parliament in Dublin.”

This determination, Carson noted, was most evident in the existence of the UVF.

Carson, ever the showman, paused allowing a cacophony of applause to rain down upon him, before continuing.

“Gentlemen, let nobody misunderstand why it is we are driven to take what I admit is a very extreme step for the safety and safe guarding of our liberties.

“Always recollect and never forget that the foundations of our whole claim, is that we are asking nothing but to be left alone to enjoy the same liberty and freedom that every citizen of the United Kingdom has inherited at his birth.

“We are not out for our selfish objects. We are not asking or demanding money or privileges or ascendancy, or anything else.

“We are out to ask to be let alone to work out our own destinies in our own way, under an Imperial Parliament and as executive responsible to it.

Sir Edward Carson made sure to emphasise that he felt exactly the same hardship and strife that the Volunteers were. He was careful to cement himself emotionally with the Ulster Volunteers, rather than to be seen as a detached entity from them - again, ensuring a sense of unity amongst the unionists where the British government had been seen to reject.

“I cannot for a moment reconcile myself to stay quiet while I see a vast body of the best and most loyal of my fellow countrymen attempted to be handed over to those who are their traditional enemies.

“It is for that reason, and for that reason alone, that I am prepared to make any sacrifice, however great, so that we may forever put an end to this conspiracy against our civil and religious liberties.

“I myself - I do not want to make it any boast - I might live very comfortably and quietly in England. I might even try the ordinary method of obtaining promotion in that profession I have so belonged. I spurn promotion; I spurn ease; I spurn wealth; I spurn everything while my fellow countrymen are in danger and I devote myself to them.”

A pause. And then, the closer: “The spirit of an Ulsterman never dies.”

The streets of Randalstown echoed with applause, and followed behind Carson as he left the town that night. The local people were drunk on promise, on power, and on the potential of being heard.

The effect of Carson's oration was entirely galvanising for the people of Randalstown, sealing many in devotion for the cause of denying Home Rule.

The following year, the Home Rule Bill received Royal Ascent, only to be shelved with the outbreak of World War One.

War famously allowed a window for a small band of Republicans in Dublin to stage a rising of their own. Although they had seen Britain’s difficulty as Ireland’s opportunity, the coup was crushed. The symbolic nature of this, however, granted Republicans martyrs for their own cause.

On July 1, the 36th Ulster Division went over the top at the Somme. The division had been drawn from Ulster Volunteers. Amongst the only regiment to make sufficient gains, their success came at a devastating cost. Over 5,500 men lost their lives - their bravery hailed in Westminister.

Of the nine Victoria Crosses given to members of the British forces at the Somme, four went to the 36th Ulster.

Their sacrifice gave life to the cause once more to the fight for Ulster to maintain links with the United Kingdom.

For many, that journey began on that triumphant night when Randalstown twinkled under a warm autumn sky.