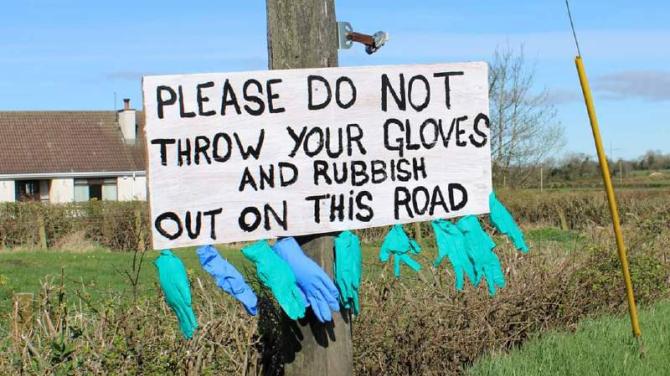 IT may seem like common sense during the ongoing pandemic, but locals have still felt compelled to urge people ‘recklessly’ dumping used personal protection equipment to ‘wise up’.

Incredibly, there have been numerous reports of gloves being dumped at locations across the Borough - so the very items designed to offer a modicum of safety are left to pose a potential hazard to others.

Philip Swann has spotted several pairs discarded near his home in Crumlin - and he has branded those responsible ‘grossly irresponsible’.

“I live on the Randox Road which is one mile from Crumlin and would be deemed to be the main thoroughfare from Crumlin to Killead village, the Camp at Aldergrove and the favoured route for people who work at the International Airport but other than that there wouldn’t be all that much passing traffic,” he said.

“Over the years we have unfortunately become accustomed to people using the road as a dumping ground. Chip papers, burger boxes, beer tins, coke bottles, even items of clothing.

“Then came the Subway wrappers and boxes complete with the disposable coffee and tea cups.

“Now things have taken a turn for the worst because on their way home from their shopping some dirt bags have taken to throwing their used gloves out the car window.

“Since Thursday, in a space of 150 yards there are four pairs of gloves - orange, white and blue - lying at the side of the road.

“The blue gloves (pictured below) were dumped on Saturday between 2pm and 2.30pm.

“I really cannot understand why people think that it’s alright to pollute the country side with their possible infected waste.

“I can only hope they read this and catch themselves on.”

Former Guardian reporter Bob Miller revealed that they were becoming a problem in Antrim too.

While out walking from Carnbeg towards The Junction this week he observed a number of discarded pairs - among other unsightly litter.

“I also found rubber gloves, along with dog litter in their black bags and some just lying out in the open.

“If we are to get over the COVID-19 pandemic, all I’m asking for is a little bit of consideration.

“There are bins on both side of the road and in The Junction itself.

“Please make use of them.

“If you want to be a reckless person that puts peoples lives in danger by your inconsiderate actions don’t wail when you end up in a hospital ward looking for help from the medical staff.

“They shouldn’t waste their bravery on you.”