Belsen : a descent into hell 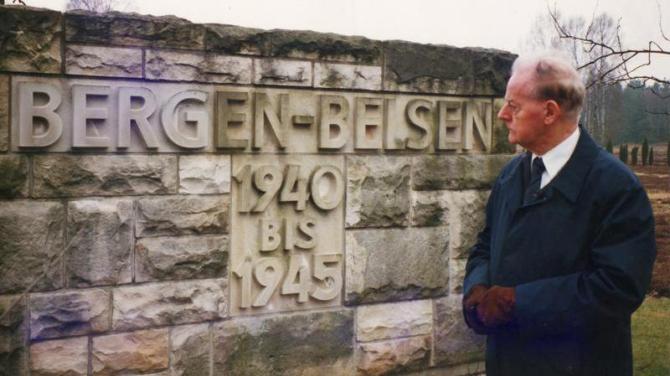 THOUGH he lived to the grand old age of 94, former South Antrim MP James Molyneaux readily acknowledged that his life changed forever in April 1945.

This was a man who had been involved in the D-Day landings the previous summer. He had seen action. He had seen death.

But on April 16 he saw Bergen-Belsen. The young airman got a glimpse through the gates of hell - and the horrors of man’s inhumanity to man never left him.

It was originally a prisoner of war camp, and for a time it was shielded from the worst excesses of Nazi rule - its inmates kept relatively well so they could be used to exchange with German PoWs incarcerated overseas.

By 1943, however, darker intentions came to the fore when parts were transformed into a concentration camp. Soon the numbers were boosted when death marches from other camps, driven by the advances of the Red Army in the east, converged on the camp in north Germany.

Hunger and disease were rampant. In the early months of 1945 - just weeks before liberation - 35,000 perished, including Anne Frank.

The British 11th Armoured Division finally arrived on April 15 but there were no celebrations. The 60,000 inhabitants of Belsen were long past that. They shared the camp with over 10,000 corpses who lay where they had breathed their last.

There had been no food or water for days and most were starving and seriously ill. Typhus and dysentry was finishing the job the SS had begun. Another 14,000 died by June - such was the epic scale of inhuman neglect.

Speaking a decade before his death in 2015, shortly after an emotional return to the camp, he said that seldom a day passed when he was not reminded of the tragedy that unfolded before him all those years ago.

“The first shock was the barbed wire electric fence,” he recalled.

“This fence was about eight to 10 foot back from the roadway and there was a hedge in between.

“It was electrified to keep people inside – standard practice for concentration camps.

“The sight was absolutely dreadful, because there in front of us were hundreds of poor skeletons of the deceased clinging on to the fence.

“We later found out they had deliberately thrown themselves up against it, they were so far gone. They decided to put an end to it themselves and grabbed the electrified fence, which killed them immediately.”

The camp had been liberated the previous day by British soldiers and such was the scale of the humanitarian disaster facing them that orders were issued for all available nearby service personnel to join the relief effort.

“We were stopped by military police at the entrance and were handed a little roll of adhesive tape.

“The guard asked us to use the tape to neutralise the horn of our vehicle and not to sound it, because, he told us, many of the people were in such a state that any noise would kill them.

“It was simply dreadful. The huts were crowded with about four times the amount of people they were built for.

“Just before liberation the reasonably fit prisoners had been compelled by the SS to take out the dead bodies which had been there for days and wheel them away on hand carts and put them into a pit.

“But there were still piles there when we arrived.

“It’s one thing seeing battlefield casualties – it’s another thing witnessing human beings who have been starved and tortured to death.”

He added: “We were given one order that was hard to bear.

“The prisoners who were still able to look after themselves came forward to us with outstretched hands looking for food.

“But we were under strict instructions not to give them food unsupervised because, for some of them, it would’ve killed them straight away.

“On my second morning in the camp, I was coming down a bit of rather scruffy-looking land and on the right hand side I saw the most odd sight.

“There were people lying about this patch of ground and, moving more closely and discreetly, I saw what appeared to be a sort of a desk covered by an old red curtain.

“I stopped and looked closer and it was a young Polish priest celebrating Mass at a makeshift altar.

“I looked a bit closer and I could see he was standing astride the body of another priest who had dropped dead with fatigue, hunger and ill-treatment that morning, just before the Mass started.

“He was holding on to the corner of this makeshift altar and with the other hand he was consecrating the elements.

“It was a very moving sight. The able-bodied prisoners were coming up in a kind of a queue and they accepted their little token and then they went back to this scruffy patch of ground and distributed parts of the elements to those who were lying there unable to move.

“Looking at them, I knew very few of them would be alive by night-time.”

Everywhere he looked, there was another heart-breaking scene.

“The sense of shock hit you like a huge wave and every step you took revealed further horrors,” he said.

“It was the sort of stuff of which nightmares are made.”

Speaking on the anniversary of the liberation, Ulster Unionist leader Steve Aiken said the local man’s testimony should never be forgotten.

“Amongst the first servicemen to enter Belsen was a young 24-year-old RAF corporal from Killead in County Antrim. His name was James Molyneaux and in later life the then Lord Molyneaux spoke movingly of how the sights he saw then had been the work of the devil, a hell on earth.

“One of our greatest achievements as a nation was the role we played in standing up to and defeating fascism. Today we should all pause to commemorate the liberation of Belsen, to remember the millions of innocent victims of Hitler and the fanaticism and madness that he inflicted, and vow to challenge those in the modern era who seem to have forgotten the lessons of the past.”

Airport Councillor Paul Michael hopes to erect a lasting memorial to his former friend and leader.

“ I recall watching his documentary on taking us back to the day he arrived at Belsen and the horrors he witnessed,” he said.

“As a councillor for Killead area it was an honour for me to know him and have his support when I first stood for Council in 1999.

“I think on this the 75th anniversary of his heroics at Belsen we should mark this with a lasting memorial to his memory and I would be delighted to bring this before council.”