REMARKABLE Allen does his bit! 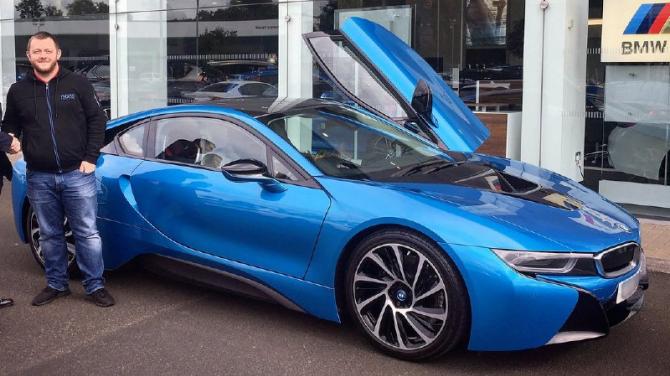 PLANES have disappeared from the sky and there are fewer cars on the road - all casualties of the COVID-19 lockdown.

So when a gleaming blue sports car pulls up outside your house it will inevitably turn heads.

Doubly so if the man behind the wheel is none other than snooker ace Mark Allen!

Yet that is precisely what happened this week when a grateful fan opened his door to pick up a prescription delivered to his house in Antrim.

Parked outside his home was a blue BMW i8 Coupe - with prices starting at a cool £114,200 - and the man with the medicine was the former Masters champ.

“I couldn’t believe my eyes when I saw Mark,” said the local man.

“During the current lockdown so many people are depending on volunteers to help them out, but you don’t expect Mark to turn up.

“I think it is fantastic gesture.

“Here’s a man with plenty of money in the bank but he decides to give something back to the community.

“Thanks so much. Helping others at a time like this? That’s the Mark of the man.”

It is not the first time that the Antrim man has taken steps to help others. He has organised many events for good causes and regularly signs items for charity auctions.

The current pandemic has put paid to many sporting events, including the World Snooker Championships, but Allen will be in action this week - after a fashion.

Thee official snooker governing body the WST has confirmed that the tournament will be contested, virtually.

Sadly the real players will not be taking control, with the matches played on console game Snooker 19 by some of its top players.

“We are really looking forward to hosting the Virtual Betfred World Championship in Snooker 19 and we hope to bring some joy to everybody watching from home at this difficult time,” said Hollie Pattison.

The world number five will take on Jack Lisowski in the first round.

She added that the winner will still receive a very real trophy.