Rise and fall of Antrim Castle 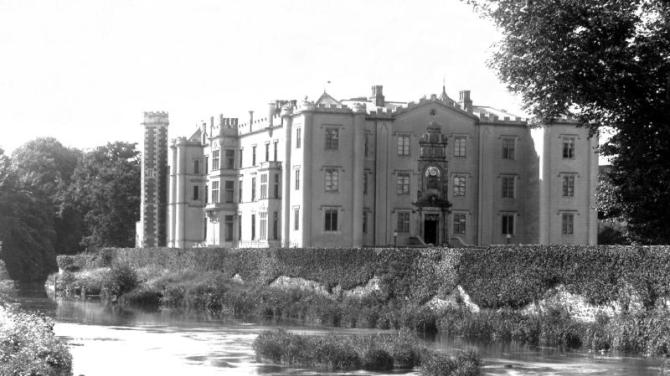 IT was a gloomy day in April 1970, when a castle’s historic walls faced their final challenge - against a fleet of bulldozers.

Rather poetically, it was raining as the 300-year-old fortifications admitted defeat.

Half a century on, the Guardian looks back at the careless loss of a historic gem.

Antrim Castle was a work in progress of centuries but construction began in 1613, under the watchful eye of Sir Hugh Clotworthy, an English settler.

The fortress proved its defensive prowess early in its life, managing to withstand the burning of Antrim in 1649. By 1662, the castle had grown exponentially, hugging the banks of the Sixmilewater.

The quadrangle enjoyed a private courtyard, and was strengthened by four towers. The walls were some six feet deep in places - a common feature in defensive property of the period, rendering the walls infallible - that is, unless attacked with a bulldozer.

Antrim Castle was steeped in history and many significant figures dropped by down the years, including famed puritan John Howe, once the private chaplain to Oliver Cromwell, who came in 1671 and wrote fondly of it in his published works. Another instance saw the Earl of Carlisle making a rare visit across the Irish Sea, and utilising the castle as a base for operations, in 1856.

Yet not all visitors were guests. Under his reign, Charles II decided to annex Protestant holdings in Ireland, which included Antrim Castle. In the 1680s the castle was raided by Jacobite General Richard Hamilton, and his men looted £3,000 worth of Viscount Massereene’s silverware and furniture. The Viscount sadly noted that this left ‘not so much as a silver spoon’.

By the 19th century, the Ninth Viscount Massereene and Ferrard, Thomas Henry Foster, conducted a restoration of the castle to reinstate its former glory.

The six pointed gables on the northern side were replaced with a castellated parapet with two towers. Five years later, the Barbican Gate was constructed.

Clotworthy House followed in 1840, as a rather grand stable block.

In 1887 another addition was made, which would rather ironically be the only recognisable part to townsfolk today - a six sided Italian tower, alongside a stretch of wall (which once was a billiards room).

The castle housed a variety of priceless heirlooms and collections. This included the Speakers Chair from the old Irish Parliament which dominated the Oak Room, and a 1539 copy of Cranner's New Testament and Queen Mary's Bible.

Disaster struck once more, during a lavish Hallowe’en ball on October 28 1922. Flames danced at the foot of the grand staircase as guests evacuated through underground tunnels to the secret garden.

The water tanks in the roof, designed to be punctured, mysteriously were dry. This meant the fire continued to rage, as men hopelessly pumped water from the long pond upon the inferno.

The fire cost the castle, and the life of a young woman - Ethel Gilligan.

But without solid proof of arson, the courts refused to endorse the insurance claim - and the grand old house was left in ruin.

By the late 1960s, Antrim Castle was believed to be too precarious to be left alone - that is, by Antrim Rural Council.

In 1967, council architect RT Taggert urged the commission to demolish the remains, stating ‘It has gone rather far for restoration. It could only be saved at great cost and the only part really worth saving is the facade which contains some plaster ornamentation’. It was also suggested that the castle has become a ‘danger to children’.

The decision to demolish centuries of local history was taken against the wishes of the Massereene family.

John Clotworthy Skeffington believed he had a good relationship with townsfolk, having already sold off a large swathe of land in the Castle Grounds in 1961 for £13,000 to create a public park.

Yet, he felt that the destruction of Antrim Castle flattened his relationship with civic leaders.

In a private letter to the Fleming family, who had once worked on the estate, he branded the move ‘wicked’.

“Regarding the Castle Grounds, the Council did assure me, when I handed them over to the town, that they would be cherished, but local authorities and government departments have no feelings of sentiment, tradition or honour,” he fumed.

“That has been my experience and especially in Northern Ireland.

“Clotworthy House was compulsorily taken from me against my will. It is all very sad, but there is little I can do.

“With reference to the private cemetery when my father and sister are buried, I have long been contemplating erecting a wall around it, but fear in present times it may be blown up.

“I erected a very strong fence around the castle ruins to protect from vandalism. Within a couple of weeks great holes were cut in it.

“The Council then demolished the ruins against my will. A wicked thing to do since there were some very fine Norman arches in the building.”

Antrim man Brian Wallace witnessed the castle’s final moments, and recalled how many were ‘shocked by the brute force and ignorance’ of the demolition.

“With hindsight, it was the beginning of the end of old Antrim,” he said. sadly.

In 2015, Lord Massereene’s son returned to Antrim to officially open the newly restored and renamed Castle Gardens. After decades of rancour it was a magnanimous and significant move.

The multi-million pound project has been a fantastic success, boosting visitors to the area and encouraging several events enjoyed across the borough.

But, one can’t help but wonder how much more impressive they would be have been if the grounds still boasted the majestic building that gave them their name.

Councillor Neil Kelly, born and bred in Antrim, reckons that the town could be a very different place if the castle had survived.

“Hindsight is a wonderful thing and it would be easy of me to be critical of my predecessors regarding decisions taken fifty years ago to knock down the big house and put a road through the Castle Grounds - and I am not going to do that,” he said this week.

“I am sure such decisions were not taken lightly and those involved would have been acting on the best information available and the best advice offered at that time.

“I do, however, wonder what Antrim would have been like today if we still had the Castle and no road running through the castle grounds.

“It would be a wonderful thing to walk through the Barbican Gate and be met with the majestic sight of the Antrim Castle set in the full splendour of the Gardens.

“Don’t get me wrong - the Gardens are excellent - but how better would it have been for Antrim if we had the castle as well?

“I think it would have added to the tourism value of the venue and would have created a better link between the gardens and the town thus creating better footfall for traders.

“On the same note I also think of the impact the new road which runs through the Castle Grounds has had on the town and also the building of Castle Way which diverts traffic from entering High Street diverting them on to the new Dublin Road and out of town.

“The new Dublin Road and bridge have in a sense cut off the gardens from the town and we really need to look at how we can get the many thousands of visitors that go to the gardens and the Lough to call in to the town centre.

“If we had kept the road as it was running down the town from Fountain Street to Church Street and High Street running round by the Old Court House and The Barbican Gate onto Castle Street on out to the Chapel Corner we would have retained a traffic flow through the town helping local traders with footfall.

“Again, it is hard for me to be critical of decisions taken at the time but I do think that by creating a dead end at the bottom of the town passing trade has been reduced.”

Neil Kelly believes that tourism and the town’s sense of pride are deeply linked.

“I really do think that, with increased visitor numbers to our tourist attractions, we all have a great opportunity to look at our town as a place people want to come and visit, and perhaps even move here to live.

“Maybe in another fifty years time there will be a councillor not even born yet who will have an article in the Antrim Guardian in 2070 asking what the town would look like now if that guy Kelly and the others had made different decision - who knows!”

And that raises a very interesting point.

Maybe it’s easier to consider what could have been, than be grateful for what we do have?

If a castle still stood at the Sixmilewater, the Massereene family would probably still be in residence. So, yes Antrim would its grand house, but both it and the gardens would be private property!

So what’s better - the award winning public space, or a castle you can peer at over a wall?

For historians, the answer is simple - and most would undoubtedly agree that it is a great shame that the historic building was smashed into oblivion.

It should never have happened - and the hard lessons must be learned.

Civic leaders are custodians of our built past. The duty must be to protect them for future generations.

Some decisions, once taken, can not be reversed.