The black sheep who tried to give the castle to his chambermaid! 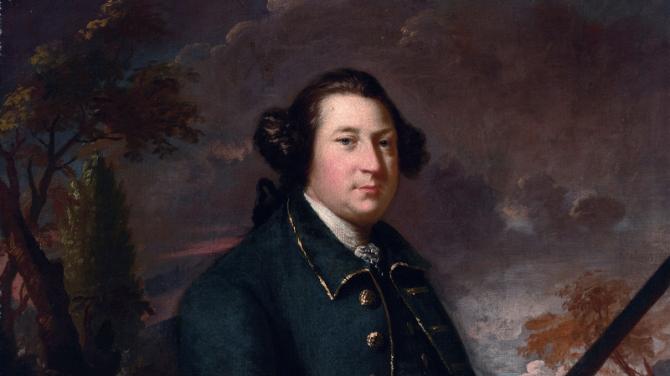 CLOTWORTHY Skeffington was born with a silver spoon firmly planted in his mouth, which is just as well - because he was always a man of expensive tastes.

Born in 1742 into a true blue-blooded world of cosseted luxury, he was oblivious to the grinding poverty endured by the ordinary folk forced to eke out a miserable existence on the other side of Antrim Castle’s walls.

His fortunate birth was the gift that kept on giving. No glass remained unfilled. Every passing whim was indulged. And no expense was ever spared.

He was living the high life, but that only made the inevitable fall all the more unexpected. Like many a young man he gambled on the belief that the good times would never end and lost - in spades.

Many talk of hitting rock bottom, but Clotworthy Skeffington was not a man to do things by halves. Can you go any lower than a filthy dungeon under the River Seine and being branded ‘the most superlative coxcomb that Ireland ever bred’?

But where to begin?

It seems he lived the aristocratic idyll until he reached the ripe old age of 15 when greatness was thrust upon him with the sudden death of his father.

The teenager became the 2nd Earl and 6th Viscount Massereene - and he responded to his new responsibilities by becoming ever more vain, conceited and disagreeable.

His mood was not improved when he was thrown from his horse. His family maintained he suffered brain damage in the fall - a claim they were to repeat in a series of sensational court hearings in Carrickfergus in 1809 when they gathered to contest his will. But more of that later.

Unfettered by a paternal guiding hand, his latent eccentricity was certainly allowed to bloom.

He developed a peculiar habit of walking with is arms crossed with his hands on his shoulders.

And then there was his dress sense. Or rather the lack of it. Truth be told, he often dispensed with clothes altogether, brazenly exhibiting himself in hostelry windows - and even playing peek-a-boo with startled locals along the battlements.

The new Lord’s devotion to his beloved dogs also raised eyebrows among the down at heel denizens of Antrim. Indeed his love for his four-legged friends led to the strangest funeral ever seen in the town.

When one of his favourite hounds breathed its last he gave it a wake and a full ceremonial burial. To top it all off he had 50 other dogs, all dressed in black mourning attire, at the service.

In due course Lord Massereene left Antrim to attend Cambridge University where he learned ‘next to nothing’ except how to row on the river, and this he did ‘to perfection’.

On coming of age he decided to join other members of the wealthy elite on the Grand Tour - a leisurely visit to the very best drinking dens and bordellos across Europe.

In the end, however, he got no further than Paris where he fell in with fair weather friends who were only too happy to help him with his favourite hobby - wasting obscene amounts of cash.

And it was there that the penny finally dropped: an empty purse does not always magically replenish itself when the owner sleeps off the previous night’s excess.

His gambling pals soon deserted him and the young aristo found himself practically penniless and alone miles away from home. Nevertheless, he remained rich pickings for an unscrupulous adventurer who offered to let him in on a get-rich scheme involving the importation of salt from Syria.

How could it fail? Convinced that he was on the brink of restoring his fortune he ploughed all his remaining cash into the hair brained scheme, lending huge sums to boost his share of the inevitable profits.

Alas, the seasoned salt seller was not all he seemed. The fool and his money were all too easily parted.

In due course, his Lordship’s mounting debts caught up with him and soon he was changing address - to a modest room in Le Chatelet, one of the city’s largest prisons.

The irony, of course, is that he could have very easily cancelled his reservation. Lord Massereene had the means to satisfy his creditors by allowing his estates to be charged with his debts, but steadfastly refused.

The estate in Antrim was worth at least £5,000 per year and his long-suffering mother offered to raise even more from her holdings in England, but he would not hear of it.

Instead he decided to fall back on a peculiarity of French law at that time which stated that debtors who remained behind bars for 25 years would be allowed to go free, their liabilities discharged. Furthermore, the people who were owed the money had to pick up the tab for their life behind bars - surely another sweetener to the bloody-minded nobleman!

But it seems that his captivity did little to curb Lord Massereene’s heroic spending. Why would it? After all, it was not his csh in the first place.

Indeed, contemporary reports reveal that ‘cheerful society was not denied him’ and he continued to live a life of wine, women and song.

He had all his food sent to him and he entertained many young mademoiselles in his cell, often rewarded them by settling their jewellery and dress making bills. Incredibly, he even managed to woo and wed Marie Anne Barcier, the daughter of one of the prison’s principal officials.

His creditors, quite understandably, found the situation intolerable. The reckless Irish man was picking their pockets, Something had to be done.

A plot was hatched. They would actually help him escape. Lord Massereene took some convincing, but when a disguise was smuggled in he reluctantly decided to end his tenancy once and for all.

But there was a catch. If he just disappeared into the night, the creditors would not get their loot so they tipped off the Chief Gaoler - safe in the knowledge that he would be bundled off to a dank dungeon under the Seine, which was the penalty for trying to escape.

They congratulated themselves on their cunning, convinced that this change in circumstances would have the desired effect on the impetuous young nobleman.

But they were mistaken, for from the lonely depths of his subterranean cell Massereene could be heard shouting that he was prepared to remain ‘in confinement with the rats’ until he was 90!

Eventually, after several aborted attempts at escape set up by Lady Massereene, his stay in prison drew to a close - the day before the fall of the Bastille on July 14 1789.

He should have been jubilant, but instead he summoned his debtors and urged them to flee for their lives as the ‘old order’was crushed by the rampant revolutionaries. He never paid them a penny, but at least his sound advice was free.

Massereene led many of his fellow prisoners to freedom, though they were confronted by armed men as they walked from the Hotel de la Force.

“One more step and my men will fire,” bellowed one, but Massereene stepped forward and defiantly said: “If you kill me, according to the law, be responsible for my debts.”

Everyone in Paris knew of the Antrim man’s plight - and not even the army were prepared to take on his commitments!

He was a free man, but his incarceration had taken its toll. He was ‘indeed a pitiful object: gaunt, yellow with a long unkempt beard reaching below his knees’.

But his wife, somehow, had remained constant to the curmudgeon, and together they set sail for England. On landing at Dover, Lord Massereene was the first to step ashore and, falling to his knees, he explained fervently: “God bless this land of freedom’.

His wife concurred, initially at least. Problem was, all this freedom meant that she actually had to spend more time with her hubby - which, as his erratic behaviour escalated, proved to be challenging to say the least.

Eventually, the woman who had loyally stood by him during his long captivity grew weary of him and packed her bag to return to France.

Massereene quickly filled the gap by striking up an unlikely acquaintance with an English chambermaid by the name of Mrs Blackburn - and eventually the odd couple married.

It was said of her: “She possessed a peculiar dexterity of twirling her mop and his Lordship admired her dexterity so much that he fell in love with this fair twiller.”

What better qualification to join the aristocracy?

He brought his new Lady to Antrim where she took control of the stunned household. She sacked members of staff and replaced them with servants of her choosing but despite whispers of a dalliance with a ‘reverend gentleman’, Lord Massereene could find no fault in her.

Besides he had other things to think about.

He would sometimes order his dining table and chairs to be set up on the roof and what could not be carried was hoisted up through windows on pullies. Then, just as the guests settled themselves down for their sumptuous alfresco lunch, he would declare himself dissatisfied and order the whole be carried back indoors again.

During the Battle of Antrim in 1798 Lord Massereene fancied himself as a leader of men and commander of troops. He raised a corps of yeomanry and fought one engagement with the rebels.

His men were drilled without weapons and simulated musket shosts by clapping their hands and presented arms in a ‘complicated pantomime involving a series of hand gestures’.

He also developed a number of entirely original manoeuvres such as ‘Serpentine’ and ‘Eel-in-the Mud’. The mind boggles what they entailed.

Afterwards he sought permission to raise a regiment, but the King wisely turned down the request.

He died seven years later - but the story does not end there.

As mentioned, the family contested the will, which left everything to the formidable Mrs Blackburn.

When the contents of the will became public, one prominent Antrim man wrote: ‘He did nothing but mischief when alive and he has laid down the foundations for future mischief, by which it is likely that lawyers will be the chief gainers’.

And no-one would have found that more amusing than Clotworthy Skeffington!