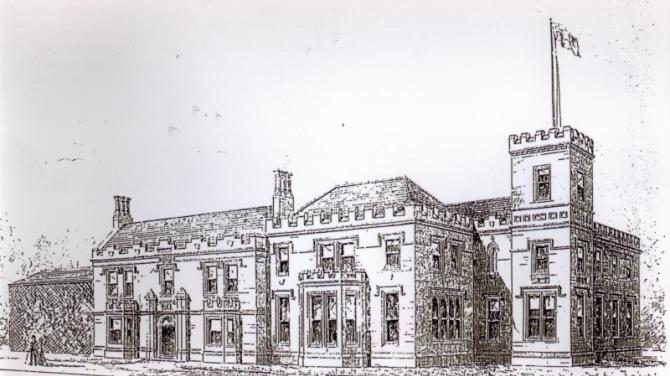 TEARS were shed and glasses raised on that bitterly cold afternoon in 1885.

It was a lucrative move and soon the money was rolling in and they needed a grand home to reflect his growing status - so work began on Ballycraigy House (pictured above), his ‘castle on the Rhine’.

Five years before he became a Conservative MP, he ploughed yet more cash into his home. The scale of the works finally emerged this week when an October 1869 edition of ‘The Irish Builder’ came to light.

The front of the old structure would not form the left wing, and any ‘plain features’ were being recast. A new right wing was being constructed too, including a 30 foot staircase, wine cellars, a palatial dining room, with an adjoining serving room. There was also the small matter of the billiard room, a smoking room and the creation of a large tower and 10 extra bedrooms.

The house, however, was past its prime and the Meenans moved on. Nature soon reclaimed the gardens and gradually Ballycraigy Hall came down in the world. Empty and unloved, thieves soon made their mark and carried away copper, timber and fireplaces. ‘Gypsies’ descended too, temporarily taking up residence among the fading opulence.

‘The mansion, now hiding as if in shame behind trees, brambles and weeds will soon be demolished,’ the reporter noted 60 years ago.

For someone who so enjoyed watching the slow ticking journey of those hands, it is a sad irony that time has not been kind to the memory of James and his family.