'All for One' returns for second helping 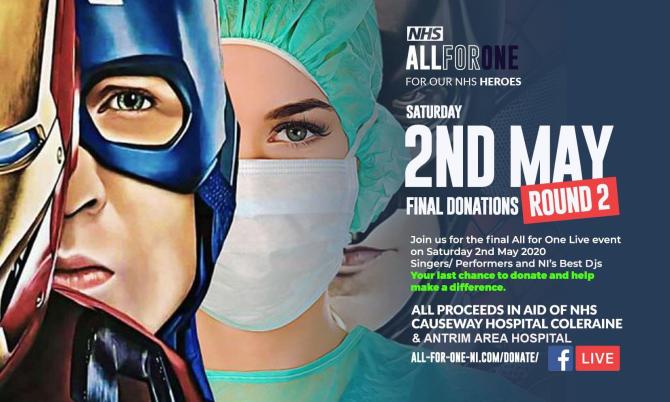 All for One, round two, taking place Saturday.

It was only ever meant to be a one-off but, such was the success of last week's virtual house party, 'All For One,' that a second session is being held this Saturday.

The initial dance music event raised over £6,500 for NHS workers and attracted thousands of viewers across several social media platforms.

Now, organisers hope to substantially add to the final total, with the money being shared between Coleraine's Causeway Hospital and Antrim Area Hospital.

"We are so close and everything is going to plan," said a spokesperson for the organisers.

"This will be our second and final event so we want to go out with a bang and raise as much money for our local NHS staff in the Causeway and Antrim Hospitals.

"Please invite your friends to our event and help spread the word.

"Together, we can make this one something to remember but we need your help to do it," the spokesperson added.

Hosted by legendary Kelly's DJ Alan Simpson - who will be returning to the decks himself - the action gets underway at 11am with live performances from, amongst others, Ciara and Jim, Shane Rodgers, Una McGill, Conal Ennis, the Dany Lyons and Damien O'Kane.

All you have to do is enjoy the music - and donate some money to our wonderful workers in the NHS.