'Disappearing river is a fisherman's tale' 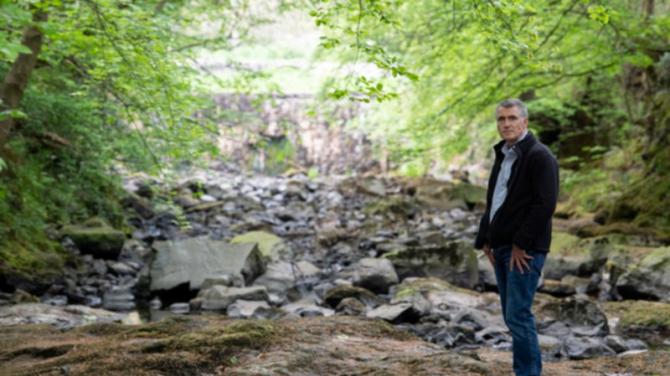 THE Antrim and District Angling Association has been accused of spreading ‘misinformation’ about a proposed hydro power scheme in Dunadry - and the company behind it are refusing to let them off the hook.

Last week Sinn Fein MLA Declan Kearney expressed concern that a section of a river in Crumlin had run dry - and he suggested that the abstraction of water by a local business was to blame.

Startling photographs showing the local rep standing on a bone dry river bed were produced to back up the claim.

The Antrim-based Angling Association saw those pictures - and claimed that similar ‘devastation’ could be in the pipeline for the Sixmile if a similar hydro power scheme was allowed to proceed further up stream.

They said they were concerned at the amount of water the licence allows the owner to abstract, claiming that it would have a ‘massive impact’ on the migration of protected dollaghan trout, salmon and smoults on the waterway.

“Our fishing club are always favourable towards most green energy schemes and environmental enhancement but not this type of hydro scheme,” said a ADAA spokesman.

“It has been proven many, many times on other rivers to have been disastrous.”

With the application currently with the council’s Planning Committee these are serious claims. And, according to the company behind the project, they are simply not true.

Furthermore, they insist that the Micro Hydroelectricity scheme will actually improve conditions for aquatic life.

“This represents one of the worst examples we have observed of false claims made by Angling groups opposed to this type of proposal. It is, unfortunately, a fisherman's tale,” said a spokesman.

“It would be bad enough if this misinformation from Antrim and District Angling Association was based on a lack of knowledge but the developers have been engaged in discussion with the ADAA for some months and have demonstrated the hands off flow provisions directly to their officers.

“It is, therefore, not only misleading but also disingenuous behaviour by the ADAA.”

They also reject parallels between recent events in Crumlin and what would happen along the Sixmile.

Indeed, they challenge if the ‘disappearance’ of a section of the river in Crumlin had anything to do with a hydro scheme at all.

“The photo in the Guardian and those published on the Facebook page of the ADAA in a related article are not of that section of river where the Crumlin hydro operates,” said the spokesman.

“There is a hydro scheme on the Crumlin River which operates at the weir abstracting water immediately above the weir and returning all of it directly below the weir - a short distance of less than 10 metres.

“It incorporates a fish pass which is flooded at all times when the hydro is operating. Any photo showing the river flow relating to the hydro would be of the weir or the fish pass. They aren't from that location.

“Wherever the images were taken they do not relate to the operation of this hydro scheme. It is, therefore, a bit fishy!”

He added: “We have obtained data from the Crumlin hydro which shows that it has only operated for the equivalent of about 15 hours throughout all of April and May. Our rivers are in drought and the hydros are not operating.

“Furthermore the images are not representative of the proposal on the Sixmile Water.

“The proposal at McClure’s Mill on the Sixmile will operate under an Abstraction License which has been issued by NIEA.

“The license states the following: ‘When water is being abstracted the License holder shall maintain a residual flow between the Abstraction point and the Return point of at least 134,525 cubic metres per day (1,560 litres per second)‘"’.

“It is hard to conceptualise that volume of water but it is 1.56 tonnes of water every second. That is a lot of water.

“Relating that flow to the Crumlin River images and the Assemblyman would be up to his knees in it - and possibly in danger of his life.

“So the images are simply not representative of the proposal.”

The company maintain that any impact would be overwhelmingly positive.

“The proposal on the Sixmile Water will actually improve fish passage and also reinstate a derelict disused old mill dating back to the 1800s into productive operation.

“If you are in favour of supporting sensible, sensitive redevelopment of our old Mill infrastructure to generate renewable energy we encourage you to visit the planning web site and review the proposals and planning statement.

“These deal with the facts of the proposal and the safeguards to protect all the associated habitat.

“We would also encourage you to write a letter of support to the Newtownabbey planning office. Planning ref: LA03/2019/0120/F.”