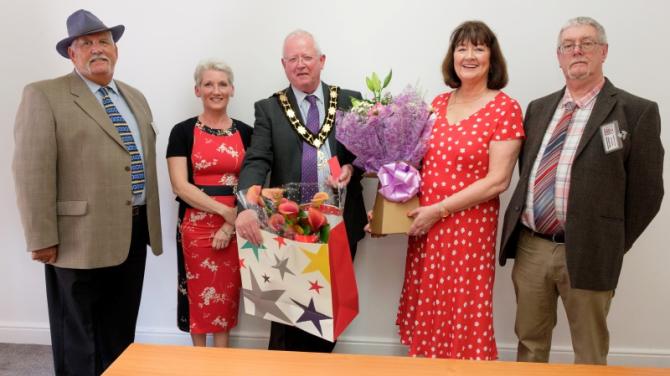 SINCE the last AGM in April 2019 Antrim Art Club have had an excellent and productive year despite the lockdown in March because of the coronaviru, President Rosemary Holland has said in her annual report.

At that meeting their guest was Reiki Master Maxine Carlin who treated members to three relaxation therapies - all of which have proved very useful during the long weeks behind closed doors!

On April 15 the Club held their Castle Mall Spring Exhibition for six weeks. It was another fabulous display of work and a report was published in the Antrim Guardian to give more exposure to the talented artists.

In May the members were given an Art Zone by the manager of Castle Mall while the exhibition ran. Sadly it was very poorly supported and fizzled out.

On May 15 they hired a bus and took a tour of Hillsborough Castle.

“It was a lovely day out and the sun shone and we took lots of photos and toured the grounds and the Castle and viewed the paintings and then had afternoon tea,” said Rosemary.

On June 1 the Club met at Parkhall to select and list their paintings for the annual exhibition which ran from June 11 to July 28.

That exhibition at Clotworthy was opened by Mayor John Smith and it celebrated 68 years. There was ‘fabulous support’ from community and councillors - and John Taggart took the photos.

The fundraiser was for Mental Health in Young People and the beautiful painting of Clougherney Bridge painted by Past President Betty Holmes was won by Lynn Pollock.

August saw the open weekend at Greenmount. Guest sculptor T K Thakkur from India was visiting Northern Ireland at the time and called in to show his work.

On August 12 the committee met for their programme planning meeting. It was decided that the next theme would be ‘Seasons’ and the featured artist would be L S Lowry. It was confirmed that Angel was to get a grant from Council - and agreed that the Club would set up a new website as the old one has expired.

September saw the Rose Society Exhibiton at Malone House and Rosemary, John, Cathy, Rory and Zoltan took part. It was a lovely evening as usual but no success this year for AAC.

On September 5 the members supported a Coffee Morning for Macmillan at Farranshane.

Guest artist on September 23 was Trevor Lawrence. Sketched in acrylics and painted in oils, it was a streetscape - his take on Lowry, the featured artist.

That month there was also painting in Farranshane on Friday mornings from 11am to 1pm.

The following month the Club were invited to Clotworthy for a free introduction to Chinese Painting. The SARN AGM was attended by President Rosemary and treasurer Cathy.

On October 8 Rosemary was on the move again, attending a Mental Health and Social Care event with VP John.

Then came the Autumn Exhbition at Antrim Library which ran from October 11 until November 8.

On October 21 Rory Reynolds dropped by for a demonstration on print making.

The busy programme continued on November 8 with the start of the popular Christmas Exhibition at Castle Mall.

On November 19 at the Club Meeting Jamie Crabbe led an interesting demo on stain glass making.

Later that month there was another exhibition, this time at Coleman’s Garden Centre which ran until December 16.

“The Club have a very long and enjoyable association with this local garden centre and through that link in the past we were able to link with Greenmount as well. Always networking!” said Rosemary.

December 9 was Guest Christmas Party night and artist Colin Corkey presented a talk on the life and work of L S Lowry with a nice supper by Angel and Jamie.

On January 27 John Taylor held a demonstration on the unmistakable style of L S Lowry.

In February past member Sean Smith passed away. He was retired principal of an Antrim primary school and loved to paint.

There was brighter news later that month when member Sheryl Newell had a baby girl.

At the February monthly meeting Angel Arnold did a demonstration on painting cows.

In March the Club hung their Lowry Exhibition at Antrim Library.

“This exhibition project drew a lot of interest on Facebook and from other artists and art groups and was well supported.”

In March they finished at Farranshane where they had exhibited several pieces of art.

“We are always indebted to them for providing ongoing space,” said Rosemary.

On March 17 everything changed. All meetings were cancelled indefinitely due to COVID-19 and Parkhall school closed so the meeting on March 23 when Rosemary was to demonstrate palette knife did not take place. Nor did the AGM on April 27, the Greenmount show or the Annual Exhibition at Clotworthy.

The Committee then had an online Committee Meeting and it was decided to do a painting a month to be ready for a Painting in Isolation event when the virus finally passes.

Some of the other clubs saw this on social media and decided it was a great idea and did the same!

The President and Treasurer went ahead and prepared a report and balanced the books at the end of March as usual.