Why Bob the builder went back to the drawing board 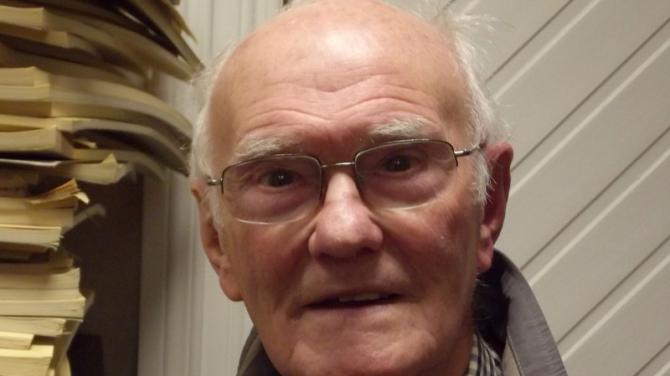 ANTRIM, like towns and cities around the world, is standing at a crossroads - with lockdown slowly easing all eyes are now on the economic carnage COVID-19 will have left in its wake.

When they finally get the green light to do so, how many local businesses will actually re-open? How many jobs considered rock solid just six months ago will be snatched away?

The loss of a job at any time can be devastating, but at the grand old age of 53 it can be utterly so.

Antrim man Bob Ross found himself in just that predicament in 1984, so he decided to go back to the drawing board - literally.

For Bob certainly had the skills to pay the bills, so when he found his career a blank canvas behind him he decided to fill it with magnificent drawings of local landmarks.

Lines, impossibly clean, capture his subjects with a forensic eye for detail. Masterly strokes and meticulous hatched shading springs the picture into the third dimension - imbuing it with a realism that often transcends a mere photograph.

Make no mistake, this is a serious talent.

But Bob is much more than a pen for hire. He has carved a unique place as a chronicler of local life by immortalising everything from the finest steeple to the dingiest entry - in advertently creating a body of work which will live on long after his inquisitive pen is still.

Bob was the first artist to exhibit at Clotworthy Arts Centre, and the last too before the multi-million pound metamorphosis of the Castle Gardens in recent years. His work also lines the walls of the Council’s Civic Centre - his drawings taking pride of place in their £120,000 art collection.

Not bad for a man who had found himself ‘on the scrap heap’ following the collapse of British Enkalon - a sad state of affairs compounded by the fact that he had played an integral role in shaping the textile giant in the first place.

But ‘Bob the builder’ had a few tricks up his sleeve. He could draw and, better still, people were prepared to pay for it.

A few years ago the local man, who was raised in a cottage near the old ‘devil’s elbow’ on the Dublin Road, recalled the many quirks of fate that saw him travel far and wide before discovering that there is no place quite like home.

As he approached 90 it was clear that he had packed a lot into those years, though he did not seem to have found the time to age - his memory as razor sharp as his famed drawings.

He clearly recalled where his artistic journey began, though he had no idea that he had embarked on one.

Nor did he known that he was being guided by a literary legend...

“I was a scholarship boy at Methody and when I was around 13 I started visiting the Ulster Museum,” explained Bob.

“I loved the art gallery and I would spend hours looking at the pictures, marveling at the detail.

“Well, after a couple of weeks I noticed that a member of staff was keeping an eye on me. He probably wondered what I was at!

“Eventually this well-spoken gent approached me and asked me about my interest in the pictures and we talked about the various portraits and landscapes.

“He asked me if I could draw and I said I enjoyed it, so he took me to a little studio and set up a Roman bust. He gave me some paper and pencils and asked me to draw it.

“He didn’t come back, so I just left the picture and didn’t think much more about it. I bumped into him again a while later and he asked me if I had any other drawings he could look at and I said I did.

“He seemed to like them and he asked me what I wanted to do after leaving school. I said I wanted to be a draughtsman, but he insisted that I should go to university to study Art.

“He looked at me and said: ‘You are the best young artist working in pencils that I have seen’.

“I later discovered that the man in question was famous poet John Hewitt.”

But the young lad from Antrim did not share Mr Hewitt’s belief and he went on to become an apprentice fitter at Harland and Wolff - but the seed had been planted and before long he was drawn to the famous Drawing Office.

There he sharpened his skills, so when a draughtman’s post opened up in Holland he ‘jumped at it’. Impressed by his grounding in the work famous Belfast shipyard, they took him on.

The move was to prove doubly fortuitous as it gave him a grasp of the language - something that was to come in very handy a few short years down the line.

During his stay, Bob and a few fellow Britons were invited to a lavish reception in the British Embassy - and his Ulster accent soon attracted the attention of the Ambassador’s wife.

“She was a very glamorous lady, so I was a bit surprised when she took an interest in me!” chuckled Bob.

“She asked me where I came from, and I said Northern Ireland. ‘I know that,’ she said, ‘but whereabouts?’

“I told her I had lived in Antrim, Ballymena and Belfast - and she surprised me by saying that she knew them well.

“Apparently she had come from Bellaghy and she was thrilled because I was the first person she had met in Holland who could actually pronounce it! It’s a small world.”

That’s undoubtedly true - and for the talented local man it was his oyster.

He worked, for a time, at the Atomic Weapons Research Establishment at Aldermaston during the time of the famous ban the bomb marches, before moving to Matthew Hall Engineering in London - who were starting work on plans for an ambitious new textiles plant in Ireland for a certain Dutch client.

“One of my colleagues said ‘there’s one that would be right up your street, because it is based in your part of the world’. Of course it was even better than that - it was in my home town.

“It was British Enkalon and I ended up number two in the construction of it. My wife and I moved home, and when they asked me to stay on it suited me just fine.

“I’d been very lucky and had done a fair bit of traveling, but it was nice to be back.”

But the dream job did not last. By the late 1970s, cheap imports and the downturn in the British economy left thousands of jobs hanging by a thread - Bob’s included.

When the shutters finally came down a few years later he found himself redundant at the age of 53.

“It was certainly a shock to the system. The bills had to be paid, and I had no idea what to do next.”

So he did what came naturally - and he started to sketch.

In those early days commissions were few and far between, but some jobs - such as illustrative work on Alastair Smyth’s ‘The Story of Antrim’ - showed what he was capable of.

And soon the phone started ringing - including a timely call from a Belfast estate agency.

“They asked if I could work from architect’s drawings and I said, of course - that’s what I do.

“Soon the offers were flooding in. At the time I was the only person in Northern Ireland doing that sort of work, so it was a busy time.

“Eventually I was making more money than I was at Enkalon. It wasn’t a fortune, mind, but it was good.”

The one afternoon he answered a loud knock at the door, to be met by two burly army officers They had seen Bob’s pictures and they commissioned him to draw pictures of historic buildings significant to them - including Belfast’s courthouses.

It was clear that he had stumbled into a completely new career, and with the work continuing to mount up he created a studio for himself in his home and embraced the opportunity.

For over 30 years he routinely completed two pieces a week, including dozens of his native Antrim. He has also drawn inspiration from Londonderry, Belfast, Dublin and the rugged coast of Northern Ireland.

Most are of buildings and landscapes, but he has also drawn animals ‘and the occasional human being’.

“I’ve been fantastically fortunate that I’ve somehow managed to make a living out of a hobby. I’ve been plugging away at this for years and I’ve never been out of work. You can’t be bad to that.”

He admits that he has found admirers in the most unexpected places.

“My work brought me into contact with former MP Gerry Fitt, and I found him to be a thoroughly nice chap,” he said.

“He had a cottage at Murlough Bay on the North Coast and he asked me to draw it for him and I was only too happy to oblige. He was pleased with the result and invited me over for a tour of the Houses of Parliament,

“When I was there he introduced me to quite a few people, including Margaret Thatcher. They spoke in very warm terms, which I must confess surprised me a bit. People thought they were always at each other’s throats, but they were actually great friends.

“I’ve met so many lovely people through my pictures. It really has been wonderful.

“Looking back at the pictures brings so many memories back, of people and places. It’s incredible how fast time flies and how quickly areas change forever.

“I still enjoy drawing, even though my hands are not as steady as I would like.”

The drawings remain as fresh as ever - and they will stand as an enduring testament to a man who certainly made his mark.