Children of the Troubles 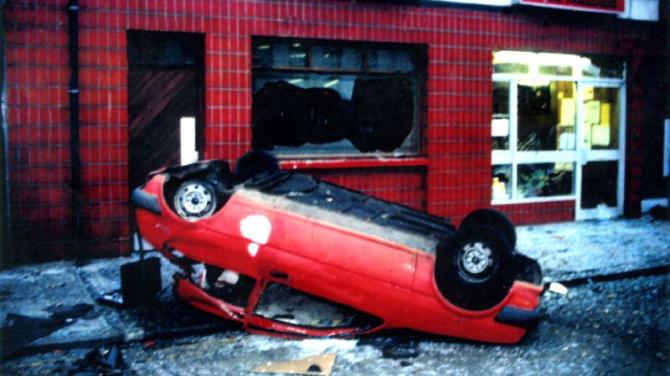 THE discovery of a school magazine from the height of the Troubles has given a chilling insight into the impact of the unfolding violence on the children of Antrim.

‘Item 4’, so-called as it was Parkhall Secondary School’s fourth annual year book, offers a compelling snapshot of life in Antrim during 1976 - a year when the exploding violence claimed 11 local lives.

And that sense of a community on the edge certainly seeped into the musings of the young people, whose work makes up the bulk of the magazine.

Take Irvine Jenkins, for example. The fifth former wrote about life in Antrim, presumably in Castle Street, at a time when it had ‘survived many a year of bombings’.

‘Today the younger boys and girls have all moved out and have fine new homes in new estates. We go visiting sometimes and after a few looks around we always guarantee the modern houses won’t stand as long as the houses in our wee street,’ Irvine said.

Little did he know.

The loss of innocence is a common thread. Florence McCollum writes about the heavy burden of those difficult times.

‘Long gone are those carefree days, childhood days with their joyful moments and golden pleasure. Long gone is the playful child, replaced by the man in the chair...I can’t imagine that he was once a child, without a worldly care’.

Fellow fifth former Barbara McDonald also seems to tap into the rampant paranoia of 1970s Ulster. She describes passing a stranger on the street. No words are exchanged, but there was a genuine fear in the unknown.

‘His face was more mature than it should have been, but it was his eyes. They were a grey colour and some time, when he was younger, they were probably happy and carefree.

‘But now when he looked at you they sent a chill through your backbone.

‘They were hard, like chips of ice. There was a look of menace in them. They seemed to bore right into you and know just what you were thinking’.

Enid McGerr relates the story of ‘The Watcher’, who is lurking among the rats and broken glass waiting for his victim to emerge from a doorway.

It was a sunny morning, but the man had been hoping for rain to drive people indoors so they would not hear ‘the cries of help’.

In the end he abandons his mission: ‘He thought it would all have been over in a few minutes, never this waiting and hanging around’.

Heather Thompson, who was fourth year, ruminated on people who found themselves behind bars in her story ‘Life in a Prison Camp’. Short in length, but big in atmosphere, suffice to say this teenager would not recommend it.

In her second piece to the magazine, Florence McCollum also reflects on crime and punishment and the heavy toll it can take. ‘Death by Hanging’ is the tale of a local hangman tormented by the memory of a young girl he executed:

‘No ghost has ever haunted me. Only the vivid memory of the girl, so innocent, so pure. Only the praying lips have troubled me all these years. Only the bright eyes have pierced my soul and will to my dying day’.

But while the Troubles undoubtedly bled through into the pupils’ prose, it was not all doom and gloom. Indeed, Colin Scott was happy to cast his mind back to good times growing up in Antrim.

Writing more than four decades ago, he said the town he knew so well was changing fast.

‘Ten years ago or even less, if you went half a mile over the head of the town you were in the country. All those estates like Greystone, Stiles, Parkhall and Steeple were not there.

‘Just about half a mile outside Antrim, up the Greystone Road, there was a farm where I was practically reared. It belonged to my granny and granda who are living in Antrim now. There was a lane there. The lane was called ‘The Folly’.

‘On that particular stretch of road there were about four houses, two manses and three small farms, including ours. In all there were nearly 50 people living there.

‘My granda keeps telling me how he carried me before I could walk through his neighbour’s fields and through his own, where hundreds of houses and maybe thousands of people now live and never even dream of what it was like then.

‘I knew the layout of the farms, the boundaries, where one started and where one ended. I wish it was still like that today, no estates, your privacy. The little cowshed, byres and barns are all gone - even the big farmhouse.

‘The only thing that is left is an old apple tree if you see it. It is on the hill field. If I owned that piece of land I wouldn’t have sold it’.

One can only wonder what he thinks 44-years on!

The magazine also includes copious reports of the school’s success on the sports pitch.

Brothers Jackie (who later played for Crusaders) and Sid Burrows (who went to play for both Crusaders and Linfield) were among the authors - though Sid seemed more interested in cross country than footie at the time.

It is interesting to note that back in 1976 the Parkhall Secondary School Chess Club boasted 30 members, while the Stamp Club was not far behind.

Janet Hutchinson, then a fourth year student but now one of the directors of Hutchinson Care Homes, wrote about the school trip to France, including a visit to the ‘Benedictine Wine Distillery’. Well, it was the 1970s.

Tastes may have changed, but then this was a different time - an era when Antrim phone numbers only had four digits.

That was underlined by the advertiser who sponsored the publication. Dozens are named, including the Antrim Guardian, but very few have survived.

The magazine is a fascinating time capsule, and one that poses another question in light of the current COVID-19 crisis: how many advertisers in the latest Parkhall magazine will be history four decades from now?