Randalstown left in a flap after cockfighting dispute! 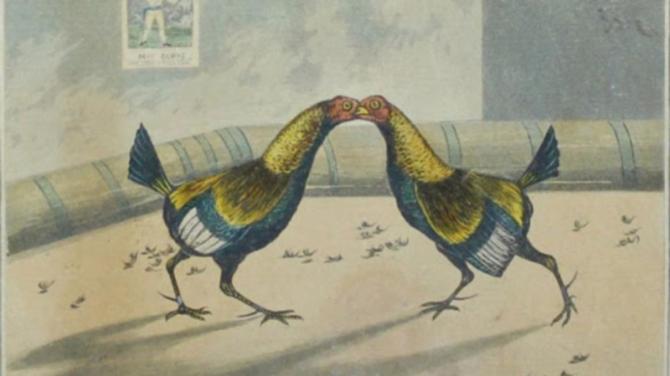 LONG months of lockdown have been a draining experience for us all.

For many it has been an anxious time, flat-out frightening even, as families attempted to adapt to that dreaded phrase, the ‘new normal’.

But even the most COVID conscious locals can’t maintain that level of high alert around the clock. Yes, global pandemics are life-changing events, but with so much spare time suddenly needing filling, coronavirus has revealed another uncomfortable truth.

Yes folks, there’s no point beating around the bush here - lockdown can be pretty boring. Downright dull, in fact.

So what to do? Many businesses have been closed but the hobby business has been booming.

Gardens have never looked better or walls whiter. Across the Borough inventive locals have been finding all sorts of ways of filling their days.

Necessity is the mother of invention and all that.

But I’m prepared to bet that precisely no-one decided to dust down the spurs, brush out the pit and organise a cockfight...

And it’s not difficult to see why.

The ‘sport’ may now be banned in practically all corners of the civilised world after animal rights campaigners rightly cried ‘fowl’, but back in the 18th century the art of ‘cocking’ brought together prince and pawper for bloody battles to the death. Stop giggling at the back.

By the mid-1700s there were cockpits in almost every town where roosters went toe to toe - and spur to spur - in moral combat, cheered on by the gambling public.

Along the ways reputations were shattered, fortunes were made and legends were written. Bred for pure aggression, these gamecocks were often elevated to celebrities in their own right, with bitter rivals traveling from far wide to feather their own nests.

Records have shown that before it was banned by the Cruelty to Animals Act in 1835, the ‘noble art’ of putting bird against bird was alive and well across Antrim - with Randalstown proudly boasting a particularly active pit.

Indeed it was there on March 5, 1739 that a fight commenced that was to go down in local history - not only for the fierce battle between the birds themselves, but for the hostilities that erupted between the rival breeders!

Neither pulled their punches in a series of stinging missives in the pages of the Newsletter.

Now the oldest English language newspaper in the world, it was just two-years-old when it brought the simmering row in Randalstown to the parlours of Ulster.

It all started innocently enough on that distant March day, and though some of the language and spellings take some getting used to the passions enflamed by the ‘sport’ are all too evident.

“We hear from Randalstown that on Thursday last a considerable cock match was fought in that neighbourhood between Mr Randal McDonnell and three gentlemen of the Parish of Duneane for ten guineas the man and three guineas a battle,” it was reported.

“Mr McDonnell’s cocks, called Balfus, Kennedy, Highwayman, Savoy-Jee and McDermott won their respective battles dryheaded. And what was most remarkable, they were all gingers and of the same cletch.

“Of 11 battles, Mr McDonnell won seven and would have undoubtedly gained the whole had not the opposite party most ungenerously and surreptitiously fought his own blood against him, which is contrary to the rules of cocking, and tends to the manifest destruction of that noble diversion.”

So what does that mouthful mean? Well, it amounted to an accusation that the Randalstown men had stolen some of his birds to use against him. A serious charge, to be sure, but the local man was undeterred - and he threw down the gauntlet to ‘some cockers in the County of Derry’ to take in his finest on April 2.

“It is hoped that the challenge will be answered,” added the Newsletter, breathlessly.

“And that Mr McDonnell may have the opportunity of demonstrating his profound skill in that science and convincing the world that his cocks are of the true ginger kinds and the best that ever flew.”

But this public admonishment of the Duneane Three did not go unanswered, and on March 27 they contacted the paper to give a very different version of events. As expected, it ruffled more than a few feathers.

They accused Mr McDonnell of acting in a ‘very disingenuous manner’ after proclaiming victory ‘with an ostentation entirely unworthy of a generous sportsman’ - and they were determined to set the record straight.

“We who were concerned against him in said match think it is our duty to set that matter in a better light, both in justice to ourselves and to the public from being imposed on in an affair of such consequence,” they said.

“We utterly deny that we fought any of his own blood against him. ‘Tis a method we would scorn to take with any gentleman. As it’s well known we do not and under favour we think it ought to have irretragable proof for so high a charge before he brought it against us in print.”

The local men added that they knew about the best of their rival’s stock - because it too had come from Duneane!

“We are loth to put him in mind that the very best cocks he was once master of was once lent him from the Parish of Duneane, and he can’t remember that without the assistance of Mollybane he could not at any time have kept himself in any tolerable breed.

“We know of his cocks except Balfus and Oranootan which, if we were in true flying order, we are not more than matches for - nor would we fear to bring down the heads of the highest of them at the first or second catch if they should by a miracle escape the sparring blows.

“Balfus and Oranootan are, we confess, extraordinary in their kind...but this proceeds not from any higher degree of excellence in the creatures but rather a surprising jumbling together of oddities rarely, if ever, to be met with in any other of the same species.

“But ‘tis well known in and around Randalstownm that neither Kennedy, Savoy-Jee, McDermott, Highwayman are any more than of half strain, if that.

“He’s very sensible. He is far from being the first that cut their heckles and though he says they came off dryheaded we can prove by several ways of worth and honour they were so severely cut and hewed that they were looked on as unfit ever to appear again on the clod - and particularly Kennedy, who was so miserably hacked that he hadn’t a whole feather left on him.

“And it we believe a gentleman who is not given to bouncing, Mr McDonnell was heard to say he had lost so much blood that he must venture to breed no more out of him.”

The authors added that some of his other claims were, at best, downright dubious.

“Didn’t Pepper and Salt demolish his best ginger at the second sparring blow? Didn’t Spitfire rise at the first catch and deflect Chuckleshead jugular as curiously as the nicest antomni?

“What need we mention the behaviour of our Cockatrice and Fireball, who bored more holes in the coats of their opposites, Slowfoot and Dryheels, than you find in the largest colander - and that in less time than an ordinary cock would peck up three grains of barley?

“We say these are things we needn’t talk of because they are facts well known by a multitude. But they teach Mr McDonnell to be more modest and throw his gasconade about with more caution.”

And then there was Cadwalador, perhaps the bravest bird to take to the clod that fateful day.

“Here we can’t avoid stopping the reader to sprinkle his tears with ours over the ashes of porr Cadwalador. A more generous bird never saluted the early sun or cheered his ravished hen.

“‘Tis supposed he despised his adversary too much and therefore received his flight, but a random rustle of the wing feathers deprived him of both his eyes - unfortunate soldier.

“He’s now forced to grope about for an enemy whose safety depends on his stunning him and whose fierceness is increased by his knowledge of his advantage.”

Injured, yes. But defeated? Not a bit of it.

“Loaded with wounds and tired with a fruitless search he pecks up a straw from the pit and, rising at it, he cleaves it in twain with his unerring heels - a most astonishing proof of his closeness of his flight.

“We know the reader is impatient to know the issue, wherefore we must inform him that rising at one of his adversary’s catches, he both gave and received death. The other out-lived him by three minutes.

“An ingeneous gentleman then present was so moved that he promised to write a pindaric on Cadwalador and, from a knowledge of his great abilities, we have no reason to question that the success will be equal to the grandeur of the subject.”

With regard to the challenge to Derry’s finest, the bold men of Duneane insisted that he would do well to settle his score with them first. They added that their stock had already won Royal approval with some of their best birds improving the collections of ‘great King of Rantam and his Sultanik Majesty of Achan’.

Randal McDonnell, not a man familiar with modest understatement, was furious and he hit back on April 12 - slamming the Newsletter for challenging the ‘impartial account’ which he had ‘entertained the public with’, even though he had had to contend with the ‘burglarious breaking open’ of his treasured game pen.

“The gentlemen who pretend to answer my last think themselves mighty wise, but as cunning as they are I may let them know, ,before they and \I part, I can see as far in a millstone as they can,” he fumed.

“I smelt the rat before I went through the half of it and saw the wicked design of the authors.

“Without the help of spectacles, I note...visibly intended by the King of Bantham, and as it is not as clear as a sunbeam, that the Sultan of Achan is no othr than the King of Balfuss. The character of Cadwalador is so clear that it would be a loss of time and an affront to the reader to explain it.

“I was not, it’s true, brought up in the secretary’s office, nor bred in the art of decyphering but I can, without vanity, wind a t**d at a moderate distance as well as another, an accomplishment that, however trivial it may appear, I wish some of my betters were masters of.

“I am really concerned that gentlemen should bring themselves into trouble, but if they will knock their heads against a post, I can’t hinder them.

“I will not willingly turn informer but I am concerned, as all honest men are, to contribute to preserving the peace and tranquility of my country, which is too visibly disturbed by the seditious libel against which I now write and which I have so plainly dissected.

“By the way, Kennedy is now so well and in as good order as the day I entered him. I hope to make good diversion with him yet.”

Sadly it is not a matter of record if the bold McDonnell agreed to a rematch, or indeed if his bout against the men of Derry ever proceeded - but it hardly matters, as all would probably have claimed the win!