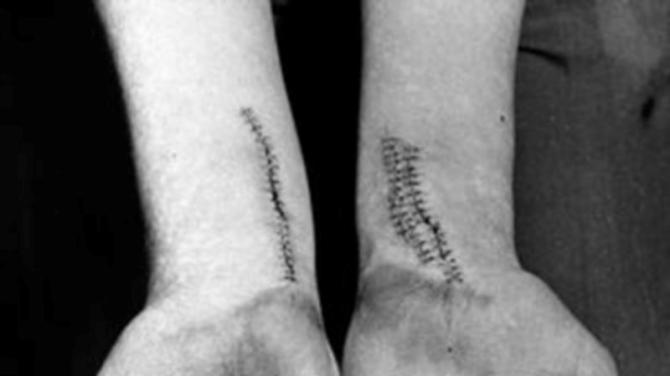 AT the young age of 50, a true survivor breathed his final breath.

His was a happy life, lived at odds with a terrifying act of barbarous hatred that had left young Gerard McLaverty physically and mentally scarred.

Yet, the scars never served as an unwelcome reminder to live a life of fear.

Instead, because of Mr McLaverty’s bravery, the bloody reign of terror conducted by the Shankill Butchers was finally brought to an end.

His vivid recollections of the night he fell victim to unbridled savagery made him a powerful witness in court, and in his ability to pick out key members of the Shankill Butchers, McLaverty cemented the fate of 11 career killers.

Gerard McLaverty was a well liked man, living in the Antrim Borough for most of his adult life and often attending Mass on a Saturday night.

He held down a string of jobs, working for a time as a Council worker and also as a taxi driver in Antrim town.

McLaverty was loved by his friends and family, and when he passed away in March 2008 after a suspected fall, a funeral service was held at St James’ Church in Aldergrove.

This tragedy hadn't been the first to befall McLaverty, however.

What had happened to him 30 years previously should be the stuff of fiction, a dark tale within a horror film - yet it was terrifyingly real.

The product of sectarian violence rife during the Troubles, the group consisted of members of the UVF - yet the victims had not been entirely Catholic.

Whilst orchestrating horrendous crimes geared to terrify the Catholic community, the Butchers carried out a spree of indiscriminate killings in Belfast.

Members of the Protestant and Catholic communities both suffered loss at the hands of these unrepentant killers, sparking revulsion from even the most hardened of terrorists.

The Butchers are notorious to this day for the gruesome nature of their atrocities - committing abductions with the intention of torturing whoever they deemed suitable, at times simply for dark ‘entertainment’.

Their victims would not receive a quick or easy death. There were slashings with butcher knives, beatings with wheel braces, hatchets and tooth extractions. Often the unimaginable ordeal would only end with the cutting of the victim’s throat ‘to the bone’.

Leader of the gang Lenny Murphy was known to the police as an intensely violent man - even by the standards of the times - and spent time imprisoned for sectarian activities.

When leading his band of henchmen, Murphy’s propensity for cruelty came to the fore - and encouraged the Butchers to continue even whilst Murphy was locked up in the Maze.

Indeed, it would be William Moore who would take up the mantle of ‘master butcher’ during this period, and who led the gang in the violent ambush upon young Gerard McLaverty.

Friends were having an evening of catch ups, laughter, and gentle boozing in a flat on Belfast’s Antrim Road.

The streets were clearing when McLaverty left the flat with two female friends at 11.30pm, walking them home to the Cliftonville Road, before making his way back towards his home alone.

It was then that Gerard noticed something was amiss.

“As I walked past the Belfast Royal Academy I saw a yellow Cortina car. It was parked on the opposite side of the road with its lights out. It was facing up the Cliftonville Road,” he later recalled.

“I could see two men in the front of this car and at the same time two men walked towards me on the same footpath on which I was standing. I had seen this car draw up while I was walking and had seen these two men get out. I then saw them cross the road and walk towards me.”

What McLaverty hadn’t realised was that he had just witnessed the modus operandi of the Shankill Butchers - and that he would be the only survivor to detail the selection and the stalking of their prey.

In this instance, it had been ‘Big Sam’ McAllister, a leading henchman of Lenny Murphy and towering presence at six foot tall and 16 stone, who made the first approach.

McAllister claimed that the two were CID from Tennent Street, and asked for identification.

McLaverty showed the pair his diary, which inadvertently given McAllister a strong clue that he was a Catholic due to his surname - enough to sign his death warrant.

“I then felt the fat man (McAllister) put a gun in my back. He ordered me to go to the yellow Cortina across the road. As I was getting into the back of the car I could see the gun in his hand.”

The car traveled through the streets of Belfast, until they had reached the Shankill Road where they pulled up alongside a darkened building far from the lights of Tennent Street.

“We all got out of the car,” recounted McLaverty. “The two men in front of the car took one of my arms each and marched me into the building. The fat man came behind.”

Within the building was a room, with only a dining room chair, two electric heaters, and a counter.

McLaverty was ordered to sit on the chair, and told he would be staying there until morning.

“The fat man and the car driver went behind the counter and came back with sticks. The fat man had a nail driven through the end of it. They both started beating me around the head with the sticks.”

Unbelievably, the brutal beating only ceased when the gang decided it was time for an impromptu tea break.

“They had a teapot and a kettle and the driver of the car went and made some tea. The fat man asked me if I wanted tea and I refused. I said: ‘I want to go home’. The fat man said: ‘You are not going home. There is no way you are getting out of this’.

The killers drank their tea and surveyed their captive in silence, before continuing their onslaught.

They began beating McLaverty with their bare hands and feet before an attempt was made to strangle the man to death with a shoelace.

When McLaverty regained consciousness, he was surrounded by a crowd of people and whisked away by an ambulance to the Royal Victoria Hospital.

In a final act of callousness, both of his wrists had been severely slashed - he had been left to die.

Doctors believe that it had been due to the unseasonably cold night that May that McLaverty hadn’t succumbed to blood loss, as the sudden drop of temperature may have slowed the bleeding.

He had been discovered by an off duty nurse, who had alerted the emergency services of McLaverty’s condition.

The use of knives in the case sent alarm bells ringing for the RUC’s C Division, and Jimmy Nesbitt - head of the murder squad - ‘had a hunch’ that the case could be the big break they were looking for.

And it was. Gerard McLaverty became central to the case, and was sent away from the ‘murder triangle’.

His family home address in Crumlin was placed under armed guard.

Working with the RUC, McLaverty bravely relived his night of trauma and even agreed to retrace the route of the Corina car whilst disguised in an unmarked vehicle.

Whist in transit on May 18, he spotted familiar faces amongst the local paramilitaries out in force.

‘Fat man’ Sam McAllister, a feared UVF member, was finally able to be linked to the Shankill Butcher tapestry of terror. Another, Benny Edwards, was also identified. The owner of the yellow Cortina, William Moore, was spotted too.

A series of dawn raids were conducted the following morning, ‘lifting’ Allister and Moore.

The questioning of the suspects exposed cracks in Moore’s statements, and when interrogators hinted that he could be charged with attempted murder, Moore ‘began to sing’.

When Moore began talking, so did McAllister, and soon a picture was built up of key members within the organisation who had caused the streets of Belfast to run red - yet no one dared unmask kingpin Lenny Murphy, who would be free to kill again before his life ended in a hail of IRA bullets bullets in 1982.

Between May 1977 and February 1979, 11 members of the gang appeared in court and on the final day of hearings it took Judge Justice O'Donnell 20 minutes to deliver the sentences, which totalled 2,000 years of imprisonment - the most handed down in a single sitting in British legal history.

Amongst those sentenced was Arthur McClay, an Antrim man who was sentenced to life with a recommendation he serve no less than 20 years for his role in the killings.

Justice O’Donnell praised Gerard McLaverty for showing boundless courage in the face of bloodthirsty carnage that potentially saving the lives of countless others.

“He was a quiet big fella,” Mr Burns reflected, adding that he had held ‘no bitterness whatsoever’ for those who had scarred him.

“He lived an open life and felt no fear that he might one day be targeted again for helping bring the Shankill Butchers reign to an end.

“He potentially saved lives by putting those people in jail.

“There was no bitterness in him whatsoever, and his friends would attest to that.”

He finally noted that McLaverty would be ‘missed by many’.

South Antrim PUP chairman, and Prison spokesman Ken Wilkinson, said that Gerard was a victim of Northern Ireland’s ‘dark past’.

“Mr McLaverty, along with countless others, suffered in the dark days of the Troubles.

“Thankfully, those days are now behind us and our communities have moved on.”

Many lives were indelibly marked by the dark years of the Troubles, but the story of Gerard McLaverty shows that scars do not have to hinder us, or serve as a monument to fear.

Rather, it can fuel positive change.

Scars may fade but they never completely disappear but the local man proved that they need not stand in the way of living a full and productive life.

He would never forget his brush with the Butchers - but he would not be ruled by it.