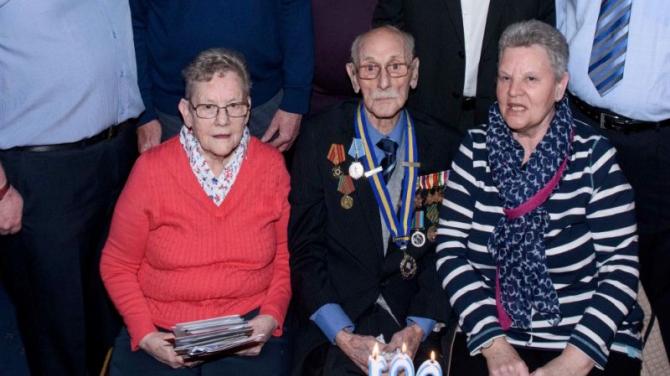 AS a young man, Isaac Higginson could never have guessed when he served alongside HMS Valiant on the same gun as a young Prince Philip of Greece, that he would won day be receiving a 100th birthday message from the Prince’s wife, Queen Elizabeth II.

“It was a lovely place, on the Mediterranean. I wish I could go back,” Isaac told the Guardian in a recent interview..

“I like Prince Philip, I would love to meet him again some day. He was a wonderful fella.”

“It was the first naval battle fought with radar,” said Isaac, describing the Battle of Cape Matapan.

“Our ships had radar and theirs did not.

“We were able to stand off them and they did not know we were there.”

He recalls another incident where Germans in mini-subs were able to get through netting in Alexandria and laid limpet mines on the Valiant and ‘Cutts’ Cunningham's Admiral's flagship, HMS Queen Elizabeth, among other vessels.

Two frogmen were caught escaping and the Admiral ordered them to be put in a locker room until they confessed where the mines had been laid. Isaac stood guard.

“They did eventually tell us where some of the mines were,” he said.

“I got one of their mitts, but it was later stolen out of my locker! ”

A number of ships were saved.

The couple had eight children, including three sons who went into the Royal Navy.

Son Brian joked: “Myself and Noel joined the Navy but only John enjoyed it.

“I think he is Dad's favourite son. I was only in for a year and three months and got an honourable discharge. I counted it down to the last second!”

John went on to serve on HMS Fearless, which was built in Belfast by Harland and Wolff.

However Brian did not abandon his family's naval heritage completely and went on to work at the Titanic Centre.

He still gives talks about the ill-fated vessel in his spare time.

Isaac met ‘Isa’ on a leave visit and it was on another trip home when he rode his bicycle to her workplace at Mossley Mill, got her out of the factory and met up with his best mate and half sister.

The pair married that same day and spent the following day together before he headed back to the Med – and for some time, Isa believed that she would never see her new husband again.

On Saturday, September 12, 1942 the RMS Laconia, a converted liner, was eight days out of Cape Town and 600 miles off the African coast when it was torpedoed, carrying over 2,000 passengers, military personnel, and Italian Prisoners of War.

It took the ship an hour to sink and Isaac and his mates were left clinging to a small piece of wood for 16 hours in shark infested waters.

The three men also managed to help a young boy to safety who had been clinging on to the side of the ship, and got him into a lifeboat.

At around 1pm the following day, the German submarine U-149 surfaced in front of the sailors and the men were rescued by the same men that sunk their ship.

On board, they were fed and watered and the German captain, who maintained he was 'a German naval officer, not a Nazi', said that the ship, capable of travelling at 22 knots, was going too slow, at just eight knots, and could easily have outrun the subs.

“At full speed the Laconia would have been no match for the U-boats.

“We reckoned the captain had been trying to save fuel.

“When we asked the German why he had done it, he said that he had been tracking us for hours and if he hadn't done it, there were others lined up behind him who would have done it.”

Following the incident of the men being allowed on the U-boat, Admiral Karl Donitz was so angry that he issued the ‘Laconia Order’ which prevented the Germans rescuing civilians at sea.

Isaac and his fellow survivors were put on to lifeboats and spent a week at sea before they were picked up by a Vichy French cruiser.

They were then interned in an Italian prisoner of war camp outside Casablanca for eight months – Isa was told that her husband was missing, presumed dead.

“While we were in the camp, the mother of the young boy, who also survived, asked to come and see us and thank us,” said Isaac, he must have been nine or ten.

“She was English, I often wonder what happened to them.

“She got special permission as the men and women were kept separately.”

Following his release in 1943, Isaac returned to Ballyclare on leave .

Son Brian explained: “When he came home, my mother burst into tears, then she saw his beard and ate the bake off him, and told him ‘get that bloody beard off!’

“He tried to explain he had been a prisoner and had no razor to shave with, but she sent him straight for a shave.”

Later in his naval career, Isaac was aboard the Black Prince during the D-Day landings at Utah beach and also served in the Arctic convoys and Russian campaigns.

“Churchill never wanted to acknowledge that he had helped the Russians,” said Brian.

“Dad got a lapel pin eventually from Tony Blair but I sent it back. I thought it was a disgrace.”

Up in Mermansk, the men were given one set of thick clothing and mitts, never to be taken off and to be burned immediately after the operation.

“They were supposed to clear and break the ice off the sides of the ships,” said Brian.

“If you didn't it would build up and they would get top-heavy and topple. You couldn't touch it with your bare hands or it would stick.”

After coming home and serving in Londonderry, Isaac left the navy in 1948 and joined the Civil Service where he worked in the Department of Agriculture and became a Colour Sergeant in the Territorial Army.

“When he led the parades in Ballyclare, you could hear him in Doagh!” joked Brian.

The family lived in Millvale, or as it was known locally 'Tin Town ' .

Isaac was also a side drummer in the Royal Navy silver band, and Brian has also become a drummer.

“The Navy and the Royal British Legion in Ballyclare, of which he is President, is still a big part of dad's life,” said Brian.

“He has many great friends and there has been great support.”

After putting his life on the line for King and Country, what was his secret to seeing the century?

While Isaac enjoyed a rum or two in the Navy, he later gave that up, but continued to smoke up to 15 cigarettes a day.

When it came to tea is came with two sugars and sticky buns!

“I thank the Lord, and take things one day at a time!” he said.

As well as his letter from the Queen, Isaac also received the Centenarian Bounty from Irish president Michael D Higgins.

The Centenarian Bounty is awarded to people who have reached 100 years of age, born on the Ireland of Ireland.

He received €2,540 and a congratulatory letter.

After leading such an extraordinary life, that seems pretty good value!

Sadly he passed away in November 2018.

Tributes were led by a spokesman from Ballyclare Royal British Legion.

“It is with great sadness today that we learn of the death of our President, Mr Isaac Higginson,” he said.

“Deeply regretted by The Officers, Committee, Staff and members of the Branch and the Club. Precious memories.”

This was echoed by Trevor McCusker.

“I am very sorry to hear the sad news of Isaac’s death. He was a gentleman and had so many stories from his time in the Royal Navy.”

Councillor Vera McWilliam, who attended his 100th birthday bash, said he had made an indelible mark during his long life.

“It was indeed a great honour, along with Mayor Paul Hamill, to visit Isaac on his 100th birthday in the Royal British Legion , Ballyclare. Deepest sympathy to the whole family circle,” she said.