On the horns of a dilemma 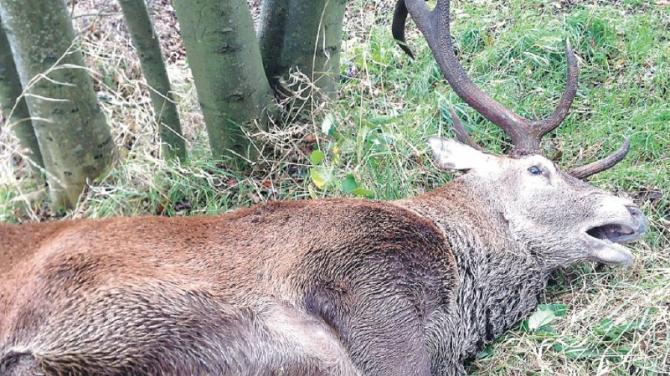 OCCASSIONALLY in life you are confronted by something that is so out of the ordinary that it stops you dead in your tracks.

Are my eyes deceiving me? Did that really happen?

And it doesn’t have to be something utterly life-altering like a UFO landing on the lawn or a mushroom cloud slowly rising on the horizon.

No, it can be something perfectly natural like a jackdaw landing on your shoulder to blag a crisp or a hedgehog ambling across the garden without a care in the world.

The people of Antrim woke to just that sort of childlike wonder in November 2015 when an unexpected visitor came-a-calling.

The alarm was raised at first light that frosty Tuesday morning when a man was out for an early morning walk with his dog when he spied the huge antlers of a fully grown red deer rise from the gloom.

Apparently he had clattered around town for a number of hours before seeking sanctuary in Steeple Park. Big mistake.

Soon it was a hive of activity as police, council workers and curious passers-by rubber-necked for the best view.

Deer do live in the wild in Northern Ireland, but normally you need binoculars and the patience of a saint to actually see one.

For many there that day, it would have been no more surprising if a kangaroo had bounced by.

But the deer clearly did not enjoy the furore he was creating. The journey had taken its toll on the impressive beast, and initially it lay perfectly still in the undergrowth.

When locals approached, however, it spurred back into action, clambering back to its feet and embarked on another ultimately futile attempt to shake off its pursuers.

Concerned that the powerful stag could attempt to bolt and seriously injure someone in the process, the park was sealed off - and the police sought expert help.

As the hours passed the chase continued until the deer decided to dark over into the grounds of Antrim Grammar School. It proved to be a fateful move.

Suddenly a policing headache in a contained public park became a clear and present danger to 750 children - and, perhaps inevitably, the police operation quietly escalated.

Soon reinforcements arrived and a police helicopter thundered into view. The eye in the sky undoubtedly helped the PSNI keep track of their quarry, but it did little to quell the unfortunate animal’s rising panic.

Watching from the ‘gallery’ were scores of students. And who can blame. It was almost Christmas, after all, and here was a living and breathing deer majestically prancing around the grounds.

Their numbers were soon bolstered when the young people were banned from leaving the school building during lunchtime. Determined to make the best of it, many decided to take their ringside seats and enjoy the spectacle.

Unbeknownst to them, however, it would all end in tears. Armed officers had arrived and were preparing to take their positions.

Shortly after 1pm the deer was tiring once again, and hugging the perimeter fence it paused near the tennis courts. The police and a vet moved in. It was decision time.

Could they safely sedate the stag, or was it time to end this chase once and for all?

As the deliberations continued people were returning to Steeple Park and could see the stand-off entering its final phase.

The Antrim Guardian was there too. The mood, once upbeat, was becoming tense.

Then, quite suddenly, the helicopter which had been keeping a noisy vigil flew off. The die had been cast.

The animal that had been quietly quivering against the fence slumped to the ground. It had paid a terrible price for straying into where it did not belong.

As the ground reddened with blood, tempers flared.

The ex-cop was on the scene within seconds, angrily accusing the officers of being ‘trigger happy’.

“I saw the whole thing and there was no need to kill that animal. I’m disgusted - absolutely disgusted,” he told the senior officer.

“Is there no-one with training on how to deal with large animals and situations like this?”

Initially another officer intervened. Step back, he said, there’s nothing to see here.

Trouble is, there was - and the deer’s huge, lifeless body lay at his feet.

The senior PSNI man insisted that the decision to destroy the deer was not taken lightly.

“This was a last resort. We didn’t rock up today to shoot this animal,” he said.

“Safety has to be paramount and we did all we could.”

As the remonstrations continued a van arrived and the deer was roughly dragged away - to the horror of the youngsters who had been alerted by the unmistakable crack of gunfire just yards from their classrooms.

The deer was hoisted inside and laid to rest beside the body of a small fawn which had been ‘collected’ elsewhere earlier that day. Removing carcasses was an unpleasant business, but business was brisk.

With a threat of a formal complaint ringing in their ears, the police set about cordoning off the scene. The men who had carried out the shooting were long gone.

Soon the former police officer retreated too, shaking his head in disbelief.

“I can’t get my head around what I just saw,” said the Antrim man.

“That poor thing was terrified. It wasn’t being aggressive at all. It was frightened and a long way from home - and for that this beautiful animal was slaughtered.

“The police will say that this was a safety issue and difficult decisions had to be made. The reality, though, is that they had the stag safely cornered in an abandoned playing field.

“Did that animal have to die today? No, I honestly don’t think it did.”

His words were prophetic. Within hours the police issued a statement to put their actions in context.

“Several attempts were made to safely and humanely manage the animal,” said a spokesman.

“Regrettably after consultation with the vet working with officers at the scene, we were required to shoot the stag as i had become very agitated and posed a risk to the public.”

Then Antrim Grammar School principal Hilary Woods said she was ‘saddened’ by the outcome.

“The animal was judged to be dangerous by the animal welfare experts and we were asked to keep pupils indoors for their own safety,” she said.

“The animal was becoming increasingly distressed and there were concerns that it could make its way to the adjacent railway line or seriously injure a member of the public.

“We were informed that the stag had been put down after attempts to tranquilise it failed.

“Pupils and staff are saddened by the final outcome but this was handled by animal welfare experts and PSNI officers.”

The police returned to the school the following day to discuss that outcome with students.

For many of them, what had started out as a morning to remember had become one they would rather forget.

To see a deer galloping through the playground was something none had ever seen before. To see it gunned down and heaved into a truck took it to another level altogether.

But looking back, did the police get it wrong? Surely the safety of one child outweighs the life of a solitary stag?

Time was moving on, and soon over a thousand kids from Parkhall and the Grammar would be spilling out to go home. What if the stag had chosen that moment to bolt and ploughed into a group of them?

The PSNI were on the horns of a difficult dilemma and they opted to take decisive action. With hindsight, however, it may have been wise not to strike when so many young eyes were following their every move.

Seldom was more learned about matters of life and death in a classroom.