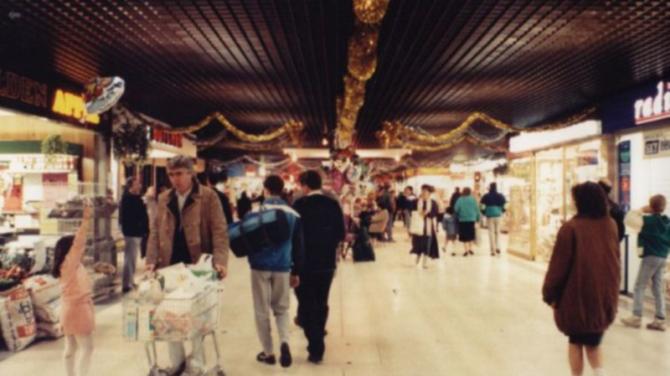 NOW, I appreciate its rare to call a shopping centre tenacious, but the Castle Mall is just that.

The Castle Mall has stood proud now for almost forty years - and it certainly hasn't been a cake walk.

With quarantine measures ever loosening, and the devastating effect of coronavirus being acutely felt by local businesses even after lockdown, one can’t help but wonder what it could mean for the shopping centre.

Yet, with the support of the local community, Castle Mall may once regain the status of ‘the heart of Antrim', housing local businesses and big corporate clients alike.

Memories of the Castle Mall amongst locals here are like snowflakes - no two are quite the same.

Generationally, there’s usually a stark split - those in their twenties now and younger may recall days walking through the mall, chatting excitedly with their friends after school paying little attention to the closed shutters around them.

Yet some amongst the community will uncontrollably hum a television jingle, now lost to time - ‘You’ll find it all in the Castle Centre - right in the heart of Antrim’.

Yes, it was once the place to be.

A place full of buzz, bargains, and big hitters, it was a perfect place to re-enact American teen movies where the kids hang out in the mall and socialise free from their folks - it was the eighties, after all.

The tills had been healthily full and beeped merrily until closing time, shoppers left with bags aplenty - things were good.

But documents that have filed away for almost four decades reveal that little more than a year before it opened, this was a castle very much under siege.

The council had met in February 1980 to discuss the complex - and the stakes could hardly have been higher.

Castle Street, which had been home to many bars and businesses, had already been sacrificed with many of the disgruntled traders shoe-horned into temporary accommodation.

They were expected to be among the first to take the leap of faith and sign on the dotted line for a spot in one of the province’s first new shopping malls - but it emerged that few were biting.

Many of those who had been moved on had been approached as early as March 1979 to make a return, yet very few had taken this opportunity.

The reason, it would seem, was a word that strikes fear into the hearts of many - rent.

Applications for spots had been sought before information regarding rates had been made accessible.

An assurance had been made that the fee would be in line with ‘current market level’ - yet what did this actually mean?

Not a lot to those approached, to put it politely.

Mayor Jack Allen enquired if there would be any financial help for these indigenous businesses, but was told in no uncertain terms that there would not.

Alan Collier, the assistant secretary at the Department of the Environment, said there would be ‘no discount’. There would be no exceptions to this.

And why should there be? After all, ‘no assurances had been made on that score’.

Whether this was hardcore negotiation or intentionally contrarian is one thing - but time was ticking on.

“They can’t come to me at the last minute and say they want a 2,000 square foot shop,” said Mr Collier.

“They have been given the opportunity to come forward and so far only three or four have done so. ”

Perhaps more could be enticed, said Councillor Allen, if the developers relented and offered some clue about the rent burden.

The answer, again, was an emphatic no. It would, said the delegation, be ‘unwise to make quotations at this stage’.

The bulky structure sprouting on Castle Street was a question mark in itself - what was the Castle Centre to be, and what would it mean for potential shoppers?

Townsfolk were struggling to get excited about the intrusive construction work.

Councillor Charles Kinahan suggested that it would be ‘useful’, given the upheaval, to provide a model of the new centre to give locals an opportunity to see what was literally in store.

Whilst far from an unreasonable request, it was met as ever with a resounding no.

Kevin Milhench, who represented Stockman’s who were developing the site, said they would not be prepared to incur the expense.

Furthermore, he did not accept that a model was necessary.

This seemed to surprise the Mayor. After all, he argued, did the people of Antrim not have a right to see what their town would look like?

And that seemed to have been a bit of a sore point among the visitors. They knew the plans intimately, so why were they being so shy about promoting their all singing, all dancing centre?

The answer, it seems, stemmed from the design itself.

It was said that creating a model to showcase the design of the mall would not do it justice - yet this was a polite way of saying that the model would not impress the locals.

Why? Because Mr Milhench said it would be ‘misleading’, before adding that the town's brand spanking new shopping salvation would resemble a ‘glorified shed’.

The view from the carpark was noted as one that was, diplomatically put, ‘rather drab’.

What about a clock tower to break it up, suggested Councillor Allen. Too expensive, he was told.

Perhaps sensing that the natives were growing restless, Mr Milhench tried a different tack. Yes, the building would be plain, but ‘an element of planting’ would help.

We are yet to see such planting - one can only wonder how extensive this greenery would have been to cover the façade (maybe it would be a bit like stepping into the Jurassic Park of shopping centres).

Yet, things were certainly not all bad.

Then kings of the high street, Stewarts, agreed to back development which proved to serve as a magnet for other businesses to get onboard.

The switch from building site to opening night was hoped to be surprisingly rapid.

They aimed to start in April of that year, with the first units completed by Easter 1981. There were other potential developments in the pipeline too, including a bar, a restaurant and commercial banking premises - but since these were two storey and required ‘specialist fitting out’ they would have to wait.

Developers also hoped to provide a cinema and a night club further down the road.

Though nothing matching those descriptions ever materialised, the Bailiwick Bar did eventually arrive, joined several years later by the short-lived Club Sahara - not to be mistaken with Club Tropicana, as drinks were certainly not free.

After several false dawns, the opening night was finally met with excitement and something akin to relief.

The Mayor said as much when he thanked the VIPs for their attendance.

“I welcome the start of this after 15 long, weary years of waiting.”

The Castle Centre, for a time, was the best of the best - and other districts followed suit, tracing the trail blazed by Antrim’s mall but with the added benefit of bigger units.

The inevitable jostling to hook the biggest high street names merged into the tightening of industry belts at the dawn of the new millennium - and the high street kings slowly faded out of the Castle Centre.

Yet when there is a will, there’s certainly a way, and manager Pamela Minford has not given up on the Castle Mall.

Whilst still big name hunting, she has encouraged the use of pop up stores within the mall’s units to ensure local businesses and workshops receive engagement from townsfolk.

“Castle Mall is continuing to go from strength to strength,” she said in a recent interview.

The Castle Mall story, it seems, is far from over yet - though in a complex post-COVID world a happy ending is far from assured.

But if recent months have shown us anything, it has been the extraordinary sense of unity born from adversity.

More than ever communities are coming together, and Castle Mall top brass will hope that as shops continue to open up shoppers will support their local.

Antrim Town Councillor Neil Kelly has commended those who have chosen to back local traders during this crisis.

“We are in difficult times and we need to support our Antrim traders by shopping in the Town centre and Castle Mall,” Councillor Kelly told the Guardian.

“The shopping centre was a welcome addition to Antrim back in the day and like many businesses they need our support to continue trading in this most difficult time.

“I have seen so many good people doing good things during this last few months and it really does make me proud to say I am from Antrim.

“We are good at pulling together when things get tough and I would ask people to continue to support our traders now and into the future.”

Neil Kelly added that the pressure of COVID-19 on business has not eased just because lockdown has loosened.

“They need us now more than ever,” said the Alliance rep.

“We have had some bad news regarding jobs in Antrim over the last number of weeks and I really do hope that by getting our support our town centre and Castle Mall traders can ride the storm and come out safe and well on the other side.”

Next time you shop, spare a thought for the mall at the ‘heart of Antrim’, and the people working inside - because community is really the heart of it all.