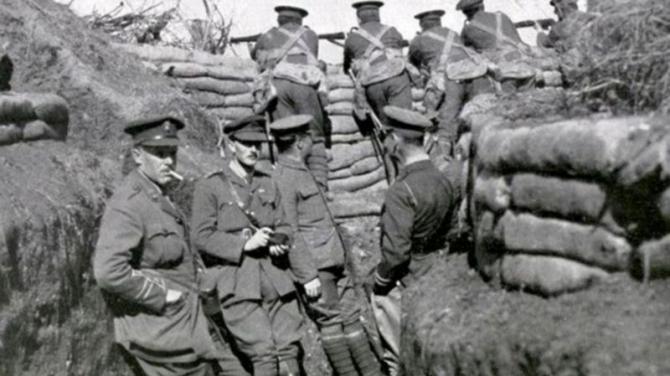 IN the aftermath of the Great War, the Irish Land (Provision for Soldiers and Sailors) Act of 1919 facilitated the construction of cottages across Ireland for men who had returned from military service.

Over 1,250 cottages were built in Northern Ireland between 1921 and 1939, with 197 being built in County Antrim - and 54 being built in the Antrim Rural District Council area.

In addition to cottages built at Randalstown, Parkgate, Crumlin, Dunadry, 21 cottages were built at four sites in or near Antrim town in 1922 and 1923.

Four cottages were built on a two-acre parcel of land on the Belfast Road in the townland of Ballycraigy. The land had been purchased from Robert Thompson of Muckamore Abbey for £140, which would equate to £6,510 in current terms.

Joseph Fulton White, the occupant of cottage number 4 in 1932, was born on December 5 1884 to John White and Mary Wallace, who farmed land at Ballyrobin.

His father died of diphtheria on February 21 1890, aged 56, and Joseph White married Elizabeth Jackson on November 14 1905 at Templepatrick Presbyterian Church.

In 1911, Joseph, Elizabeth and their three children were living at Kilmakee near Templepatrick.

Joseph was a railway labourer and enlisted with 14th Battalion Royal Irish Rifles. However, he served on the Western Front with 16th Battalion from October 1915.

Rifleman Joseph White was transferred to the Class Z Army Reserve on March 15 1919 and is commemorated on the Roll of Honour for Muckamore Presbyterian Church.

A son, Able Seaman Joseph White, was serving on HMS Glorious when she was sunk on June 8 1940 by the German battleships Scharnhorst and Gneisenau with the loss of over 1,200 lives.

Elizabeth White died on July 16 1961, aged 79, and Joseph White was living in the ISSLT Cottage when he died at Massereene Hospital on August 10 1965, aged 80. Joseph and Elizabeth White are buried in Antrim Cemetery (Plot U/2/6).

Josias Cunningham, of Glencairn House in Belfast, a leading figure in the Unionist community, sold two parcels of land on which cottages were built.

Both plots were located on the Belfast Road, near its junction with Fountain Street

A 1.5 acre parcel of land was purchased for £250, which equates to approximately £11,625 in current terms, and three cottages were built on the site - two semi-detached cottages and one detached cottage.

Daniel McGrubb, the occupant of cottage number 2 in 1932, was born on February 13 1891 at Church Street in Antrim to Daniel McGrubb, a shoemaker, and Mary Anne Hunter, being one of their ten children.

Daniel McGrubb was a groom when he enlisted with the Royal Irish Rifles at Antrim on September 18 1914 and was deployed to France with the 11th Battalion in October 1915.

He sustained gunshot wounds to the face on September 3 1917 whilst taking part in a trench raid and spent the period 30th September 1917 to 22nd March 1918 on Home Service.

As he had been a groom before the war, he was transferred to the Army Veterinary Corps before returning to the Western Front.

Daniel McGrubb returned from France on 28th March 1919 and was transferred to the Class Z Army Reserve on 11th May 1919.

He is commemorated on the Roll of Honour for First Antrim Presbyterian Church.

Daniel was living at Church Street in Antrim when he was awarded a 50 per cent Disablement Pension in respect of the loss of his right eye due to gunshot wounds.

The pension was paid at the rate of twenty shillings per week, which equates to approximately £49 per week in current terms.

On the other side of the Belfast Road, a seven-acre parcel of land was purchased for £600, which is roughly £32,460 today.

Fourteen semi-detached cottages were built on the site and the scheme was named Bourlon Road, after the Battle of Bourlon Wood in November 1917.

David Hamilton, the occupant of cottage number 2 in 1932, was a son of Hans Hamilton, a bleacher.

Prisoner of War documentation records that he was born on March 31 1882 at Dromore.

David was a militia man and served with the 5th Battalion Royal Irish Rifles between 1900 and 1902, being awarded the Queen’s South Africa Medal (with the Orange Free State and Cape Colony clasps).

David enlisted with the South Lancashire Regiment at Belfast in January 1903, being stationed in India from 1904 to 1906, and was transferred to the Army Reserve in March 1908.

David was a dyer and living at Massereene when he married Mary Murphy on July 11 1911 at All Saints’ Parish Church in Antrim.

David was recalled from the reserve on August 5 1914 and deployed to France on 14th August 1914 with 2nd Battalion.

On repatriation from Germany, he was transferred to the Class Z Army Reserve on the 24th of March 1919.

David was living at Fountain Street in Antrim when he was awarded a 30 per cent Disablement Pension in respect of sciatica.

It was paid at the rate of twelve shillings per week, plus an allowance of eight shillings and eleven pence for his wife and three children.

The total pension of twenty shillings and eleven pence in 1920 would equate to £51 per week in current terms.

David Hamilton, a member of Thornhill LOL 651, was living at 4 Bourlon Road when he too died at Massereene Hospital on January 2 1964, aged 81.

Eight semi-detached cottages were built on a 4.17 acre plot of land at Oriel Road, the scheme being named Menin Road after the Battle of the Menin Road Ridge in September 1917.

The land had been purchased from Robert James Kirk and Norman Kirk of Antrim for £328 and 17 shillings, which equates to approximately £17,791 in current terms.

James Corrigan was the occupant of cottage number 6 at Menin Road in 1932.

He was a Harbour Master when he married Margaret Henry, a mill worker, on June 23 1910 at St Comgall’s Roman Catholic Church.

They were living at The Cutts when their daughter, Lily, was born on September 10 1911.

Maggie Corrigan was 26 when she died of emphysema on May 12 1913 at the Antrim Workhouse Infirmary.

James enlisted on June 3 1915 at Antrim and was initially posted to 7th Battalion Leinster Regiment but was transferred to the Royal Irish Regiment in August 1915.

He joined the 1st Garrison Battalion on the Gallipoli Peninsula on 5th September 1915 and also served in the Salonika Campaign with 10th (Irish) Division.

In February 1916, he required hospital treatment for an unspecified illness and was treated at No 15 General Hospital in Alexandria before being transferred to the Convalescent Hospital at Luxor.

He was transferred to No 27 General Hospital in Cairo before being discharged to depot duties in March.

He was admitted to the Citadel Hospital in Cairo in September 1916 suffering from enteritis.

He served with the Mediterranean Expeditionary Force from September 1915 to September 1916 and spent the remainder of the war on Home Service.

He married Alice Bebington on November 18 1916 at Liverpool.

In February 1917, he was transferred to the Military Foot Police but returned to the Royal Irish Regiment in December, joining 3rd Battalion.

James Corrigan was discharged due to sickness on May 8 1918 with Silver War Badge Number 359831 and his character was recorded as ‘Good. A sober honest man’.

James and Alice Corrigan are buried in the graveyard at St Comgall’s Roman Catholic Church.

Nigel Henderson, a researcher with History Hub Ulster, is documenting the locations of the ex-servicemen’s cottages in Northern Ireland and is researching the original or early occupants of the cottages. Whilst he already has details about several of the occupants of the cottages in Antrim and Muckamore, Nigel would be interested in any information that local people may have. He can be contacted via research@historyhubulster.co.uk or via the Homes of Heroes NI (1921-1939) group on www.facebook.com/groups/204334820682671