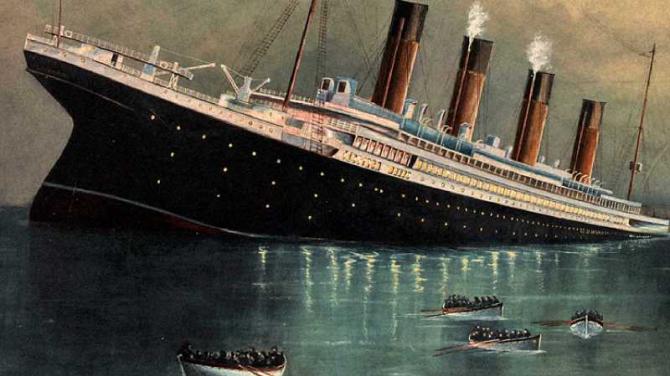 SEEKING refuge on a wind-swept afternoon among the dust laden shelves in a public library, I happened to stumble upon a coffee stained copy of Senan Molony’s ‘The Irish Aboard Titanic’.

Leafing through its brittle yellowed pages, I became fascinated with the biographies of the Guarantee Group, the nine Harland and Wolff employees of the month whose lives were cut short when they were selected to accompany Titanic on her maiden voyage to deal with any minor finishing faults.

The Irish economic migrants who embarked on Titanic from Queenstown, now Cobh in County Cork, hoped to create a better life for themselves in America, and one Crew member who caught my eye in particular spent his youth not three miles from my own home.

Matthew Leonard, the son of Catholic parents John Leonard and Sarah Barry, was born in Philadelphia, Pennsylvania on Tuesday, July 20 1886.

Matthew’s parents, economic migrants in the USA themselves, returned to Ireland soon after and in 1890 Matthew’s only sibling Mary was born.

Following the death of his father in 1895, Matthew, his mother and sister went to live with their grandmother, Bridget Barry, at the farm homestead near Toome and here they appear at 8 Brecart Road in the 1901 Census.

By the 1911 census, the family had relocated to 23 Chatsworth Street, Pottinger, east Belfast, with Matthew employed as a grocer’s assistant and his sister Mary as a machinist.

Seeking better wages, Matthew left to work at a Jewellers, Joseph Rea’s in Ann Street, but requiring more money to support his dependants, he decided to go to sea before Easter 1912.

Matthew is listed as a crew member on the Titanic for her delivery trip from Belfast to Southampton, and when he signed on again for her maiden voyage on Thursday, April 4, 1912 in Southampton as a Third Class Steward with monthly wages of £3 and 15 shillings, he gave his address as 45 Chatsworth Street, Belfast.

I can vividly remember my heart skipping a beat as I tentatively turned the page to discover Leonard’s fate.

I’d seen the statistics tables at the beginning of the chapter.

Leonard drowned in the sinking, and his name is not mentioned in any of the testimonies given by surviving Third Class Stewards at the British Wreck Commissioner’s Inquiry or the United States Senate Inquiry in the aftermath of the tragedy.

Neither was his body recovered by the cable ship Mackay Bennet, chartered by the White Star Line to search for bodies among the wreckage, recovering only 306 bodies of the 1,517 victims and identifying merely 56.

The only thing we know for certain about Leonard is that at 2.20am on the morning of April 15, when Titanic slipped beneath the surface of the Atlantic Ocean is that his wages were stopped by the White Star Line as the ship sank from under him.

Interestingly, stories like that of Matthew Leonard could well have been lost to the annals of time but for a Northern Ireland born film producer who became fascinated by his home country’s feat of engineering.

It provided the inspiration for William MacQuitty’s greatest film - A Night To Remember - and stemmed a reinvigorated sense of pride in the RMS Titanic across the province.

After spending his youth as an employee of the Chartered Bank of India, Australia and China, MacQuitty returned to Ulster and embarked upon a filmmaking career.

One evening in late 1955, his wife brought home a book which MacQuitty would describe as a ‘ready made script’ for his Titanic film ambitions, namely Walter Lord’s definitive account of the Titanic story ‘A Night to Remember’.

He quickly took the book and his casting ideas to Head of the Rank Film Organisation, John Davies, who bitterly complained that the film had been made countless times before.

MacQuitty, however, stressed that the local role in the Titanic’s construction had been omitted from previous screen representations, and rather eloquently stated that the sinking was the end of an era for the rigid class structure in Edwardian Britain.

He argued that ‘Titanic’s Memorial in Belfast City Hall is right alongside the War Memorial; on the Titanic Memorial, names of those from Ulster lost aboard Titanic were ordered in terms of importance within the Harland and Wolff shipyard and the passenger and crew classes, whereas the names on the war memorial were written in alphabetical order’.

Yet MacQuitty’s overwhelming civic pride in the Titanic, and those connected with her - like Leonard - was not a sentiment popular here in the late 1950s.

The sinking of the Titanic in April 1912 wounded Ulster’s civic pride in Belfast’s shipbuilding industry, and in the 1930s and 40s strenuous efforts were made to ensure this wound was not reopened by excessive memorialisation of the Titanic’s links with Belfast in the public domain.

There were complaints that Titanic was a ‘sore point’ in the history of Belfast and that the drowning of 40 local people, Mathew Leonard included, meant that the ship sinking on its maiden voyage was a ‘very grave set-back in civic pride’.

Nonetheless, A Night to Remember premiered at The Odeon, Leicester Theatre in London on July 3, 1958.

It may have been a black and white Rank film which soon became outdated with the advent of colour on the big screen, but it has ensured that the memory of Titanic, and the stories of people like Matthew Leonard and other migrants who lost their lives, will never be forgotten.

***If you have any information or photographs of Matthew Leonard or any other local people with links to the Titanic, please get in touch with Michael by emailing news@antrimguardian.co.uk