Champagne must stay on ice for the class of 2020 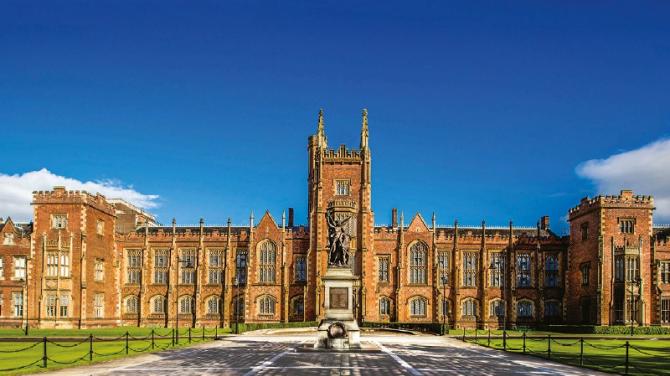 THE day I receive my degree parchment from Queen’s University, I won’t be wearing an ornate graduate’s gown. Truth be told, I’ll likely be in my dressing gown, not long out of bed, when the postman delivers it. He’d probably look at me funny if I tried to shake his hand.

For the class of 2020, the final year experience has closely resembled what you might see if you watched the first Harry Potter film in reverse - the grandiose architecture, the packed old lecture theatres, the wild drunken parties at Ron Weasley’s student flat - all vanishing prematurely as the rewind ends anticlimactically with a letter in the post. You’re a graduate, Harry!

Of course, there’s little that can be done and little use complaining. The planners of 2020’s graduation ceremonies didn’t have access to crystal balls, or so I’m told. They may have had contingency plans in place for bad weather, but certainly not a global pandemic.

All across the world, COVID-19 wiped weddings, Christenings, festivals and other mass gatherings from our collective calendars, so when lockdown began it didn’t take long to deduce that a conventional graduation would be unlikely. That said, when official confirmation arrived that ‘virtual’ graduations would be held online in lieu of the real deal, many - myself included - would admit to feeling a pang of disappointment.

Of course, the coronavirus has been responsible for far worse woes than those experienced by me. It has devastated livelihoods, separated families, and claimed lives. It’s a privilege to be able to complain about the cancellation of what amounts to a school costume party when far worse concerns play on the minds of others.

That said, COVID-19’s reign has certainly shaken up what used to be taken for granted as the typical university experience. When the Queen’s campus closed back in March, I quickly found myself missing things that once had me seeing red.

I felt a strange nostalgia for catching busy trains to Belfast wherein the only available seats always, in a cruel twist of fate, happened to be adjacent to a rather unfortunate smelling toilet. I relished in the memory of those 9am lectures where I’d shuffle into class, dressed comfortably in a jumper and jeans, only to find my peers dressed in designer clothes and apparently intent on making me feel like Worzel Gummidge. I yearned for the mild claustrophobic panic that accompanied a lecturer asking me a direct question about an assigned reading I hadn’t completed, and for spouting half-baked nonsense at them until they took pity and averted their gaze from my flushed face.

Above all, I missed my pals. Back in the halcyon days of February - when I rather naively dismissed COVID as something tragic happening solely on the other side of the globe - my best chum and long-time drinking buddy had invited me to watch a football match at the Student’s Union bar. Never a fan of sports but always a fan of a night out, I relented and went along.

My friend, apparently having decided that my typical uni attire of long sheepskin coat and floral shirt were unsuitable for an evening of shouting ‘goal!’ at the TV, disguised me as a fan of his favourite team by lending me a jersey to wear. But, no matter how my pal tried to include me in the rowdy mirth-making or excite me with the no doubt fantastic bootball being played onscreen, I was oh so very bored.

Flashes of danger came with each trip to the bathroom, where along the way I was glowered at by chaps wearing jerseys different to the one I’d borrowed - supposedly either fans of the opposing team, or perhaps a highly organised and uniformed crime syndicate armed primarily with weaponised glares. An even greater thrill came with the jeopardy of bumping into someone in the same shirt and bumbling through a conversation about players I had never heard of. As I always say, Stevie G really can bend it like Victoria Beckham on the sport court!

Little did I know, it would be my final trip to the Student’s Union bar as, well, a student. It was also the last time I saw my friend, who rather wisely slipped back to his countryside home as COVID-19 loomed ever greater in Northern Ireland’s peripheral vision. A couple of weeks later, the campus shut down altogether. Botanic Avenue, usually hiving with students, fell silent.

First years - who, reasonably assumed university would be a post-adolescent playground lifted straight from any number of coming of age films - were sure to be downhearted that it all now lived solely within their computers.

After all, to be a first year at university is meant to be great fun. I still look back fondly on those heady days when everything seemed bigger, social horizons seemed unending, and it was always five o’clock somewhere. Of course, things soon settled into a rhythm and coursework quickly took on a heightened preponderance, but those first months were a frenetic blur of new friends and new freedoms.

Instead, 2020’s first years have found their living rooms, kitchens and bedrooms become their classrooms. Checking in with their lecturers and friends over Zoom and Skype, their experience instead has resembled a particularly boring episode of ‘Star Trek’ in which mission control can’t work their laptop camera properly but is nonetheless adamant that Captain Kirk write a series of properly referenced essays. Calling out “Beam me up, Scotty!” doesn’t teleport you into your lecturer’s living room, but it wouldn’t have hurt to try.

Given that my second semester revolved around writing my final year dissertation, I was spared from wrestling with the trials and tribulations of video calls.

That said, writing a highly weighted dissertation worth a hefty chunk of my overall degree score with no access to the university library was far from ideal to say the least. Working at a snail’s pace from my bedroom and shackled with a sleep schedule that deteriorated by the day, I was momentarily transformed into a hermit who could only be lured from his den with the promise of a Pot Noodle.

Granted, my dissertation gave me something to focus upon during the gruelling groundhog days that comprised lockdown’s peak. When it was finished and I emerged from my cave like a particularly disheveled ancient monk, I probably didn’t recognise the big yellow ball in the sky that hurt to stare at.

Then came the bizarre uncanny feeling that I was finished with uni. That was it. And that was when the days began to drag. It took two months or so for our final classifications to be released, but it felt like double that.

Any day now, my parchment will arrive at my front door. On July 30th, I’ll put YouTube on the television and tune into the live stream that will substitute for my graduation ceremony. Maybe I’ll be stunned to see my perfectly rendered computer-generated likeness moonwalk across a digitized stage before the words ‘Mission Complete!’ flash upon the screen as in a video game. More likely, I’ll be treated to a couple of filmed speeches before I abscond to the back garden wearing my cardboard mortarboard. I’ll eat a Frube there and pretend I’m having strawberries and cream in the shadow the Lanyon building.

It is of some comfort that Queen’s University have promised a more conventional celebration for the class of 2020 as soon as COVID does us a favour and leaves.

Until then, indulge me in my fantasy that any minute now, I’ll be awoken by a stern voice.

It would be an absolute treat - not to mention a flimsy literary trope - to wake up and realise I’d fallen asleep during an exceptionally dull 9am politics lecture.

I would certainly try to refrain from the thought that flitted naively into my head during all too many classes over the course of my three years at Queen’s.

“Wouldn’t it be nice to have a few months away from all of this?”