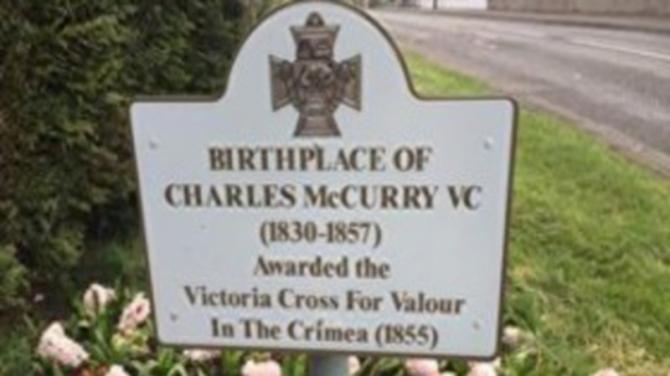 LAST year a special ceremony took place in Killead to honour a local hero who was awarded the Victoria Cross for his inspirational bravery in battle.

Charles McCurry joined up as a teenager and saw action in the Crimean War with the 57th Regiment of Foot, nicknamed The Diehards and later renamed the Middlesex Regiment.

Private McCurry won his VC at Sebastopol in June 1855 when, at great personal risk, he picked up a live shell aimed at his trench from an enemy battery and tossed it over the parapet where it exploded seconds later.

The lives of several of the brave young soldier’s comrades down in the trench with him were saved by his action.

He didn’t live to receive his medal.

He was posted to Malta with the 57th, where he died before the investiture could take place.

McCurry was laid to rest in the Msida Bastion Cemetery near the Maltese capital Valetta.

A commemorative stone was unveiled in his home town by former Mayor Paul Michael in 2019 and his name is venerated in the Antrim Branch of the Royal British Legion.

It was widely believed that Private McCurry was the only local man to receive the highest British award for valour - but a second serviceman’s name is also included on the roll of honour.

Though Private Harry May originally hailed from Scotland, many of his descendants have since taken up residence in the Antrim area - and in 2007 that link was cemented by a permanent display in the town.

Andrew Strain, who lived in Irvine, set the ball in motion when he paid one of his regular visits to the Borough to catch up with relatives - but this time he brought a special gift.

It was a precious picture of his grandfather and though it was the only copy he owned, he felt that it should hang side by side with that of Charles McCurry.

Private May, like tens of thousands of that lost generation, signed up to fight for King and country when war clouds gathered over Europe in 1914. He joined the Scottish Rifles and by October 22 1914 he was fighting in Flanders.

The London Gazette of April 15 1915 recorded ‘How private Harry May won Deathless Glory’ in a series of conspicuous displays of courage under fire.

It revealed that Private May had been fighting near La Boutillerie when he endeavoured to rescue a wounded comrade under withering fire. Unfortunately the injured man later succumbed to his injuries.

But Private May was unbowed and, moments later, he carried a wounded officer 300 yards to safety.

A colourful account later appeared in the Glasgow Weekly Record.

“Leave me Mayor, for God’s sake leave and save yourself,” bellowed Lieutenant Graham - but his plea fell on deaf ears for, as contemporary accounts recorded, no-one was being left behind ‘while he had strength in his body’.

‘With these words ringing in his ears - with the terrible noises separable from modern warfare screeching all around him - Private Harry May struggled bravely on dragging with the last ounce of his strength a wounded officer out of the jaws of death into comparative safety.

‘Those were dark days for that heroic little army of Great Britain; dark days indeed, which were only lit up by the brilliant devotion to duty and the indomitable courage of every individual soldier from the Field Marshall in command right down through the ranks to the latest recruit.’

Harry made light of the incident and spoke little of it when he returned home for a two and a half month furlough.

By January he was back at the front and there he remained until July when he learned to his ‘great surprise’ that he had been awarded the VC. He received a hero’s welcome led by the Lord Provost of Glasgow - and he went down in history as the first man from that great city to be awarded that most prestigious of honours.

“I only did what any other soldier would have done. Plenty of men have equalled what I did,” he said.

UUP man said the Legion were proud to give the Scotsman pride of place.

“I know there are many people in Antrim who are justifiably proud of their links with Private May,” he said.

“The Legion is as absolutely delighted to make this small gesture for a man who was prepared to lay down his life to protect his friends. Truly he is an inspiration to us all.”