A birthday wish for Ava 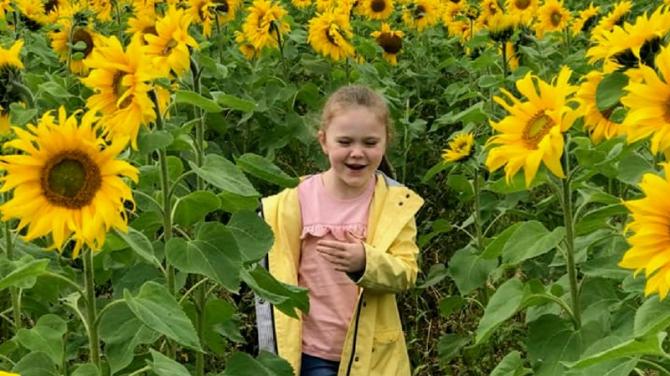 AVA was diagnosed with a spinal cord tumour on the 25th July 2018 after waking on the 9th July and not being able to raise her arm.

Ava still had full use of her hand but could not elevate the arm.

I took her to the GP, A&E and then called A&E again a few days later asking to speak to a specific doctor and told him my concerns.

He listened and brought a physio to fully assess her and referred us to paediatrics.

I phoned the children’s ward and got the appointment fast tracked leading to the MRI and fast diagnosis.

Spinal cord tumours are extremely rare and Ava’s was quite large covering a length of five vertebrae in her neck.

When she was first diagnosed I could only find cases in Korea and the USA.

We were then referred to the Royal but struggled to find a surgeon willing to operate on such a delicate area and there was also a query that the tumour was possibly a post chickenpox reaction that causes swelling on the spinal cord.

We had a rollercoaster ride of tumour, chickenpox reaction back and forth with opinions from Great Ormond Street.

We eventually met a very talented surgeon whose main aim was to biopsy her tumour - and, if he could, he would remove it.

Ava had it all removed on the 10th September 2018 during a 10 hour operation.

We were told it was a grade 1 non-cancerous tumour and it was looking hopeful.

The operation caused Ava never to walk again and she lost full use of her right arm but we were hopeful at the time that these would return.

We were very positive the first few days but unfortunately 13days later an MRI scan showed the tumour was back 140 percent and was now covering seven vertebrae in length.

This was devastating for us all and although the official pathology was not back yet we were told Ava would only have a few months to live as they had never witnessed a more aggressive tumour.

We had to commence radiotherapy and chemotherapy immediately not for curative purposes - just to have a little more time with her, although there was no guarantee.

We did the standard five-week treatment of oral chemo for brain/spinal cord tumours and radiotherapy and during the first week the pathology came back that Ava had spinal cord glioblastoma. It was the first case in 29 years at the Royal and a terminal prognosis.

Her tumour also had pathological markers to make it the most aggressive form of glioblastoma known.

She had suffered from Type One diabetes since she was two and was having seizures from low blood sugars and not wanting to eat.

We finished the five weeks but decided not to start the maintenance dose at the end of January as the chemo seemed to be causing more problems than the tumour - and Ava had been very ill throughout December with some feeling she might not see Christmas.

But, remarkably, Ava picked up and we had a great few months of lots of trips in the car. She would even make me drive her for coffee in Belfast at 2am.

A stable MRI at the end of January showed the radiotherapy has stunned the tumour and slowed its growth.

We did our best to keep her happy and comfortable with little support.

Ava was not admitted to hospital once after her cancer diagnosis and she remained at home her complete journey.

It was a very difficult, heartbreaking, exhausting and emotional time and Ava had such a negative hospital experience she developed anxiety as was scared or aggressive towards any healthcare professionals.

This made her journey very difficult and without the support from certain charities I would have crumbled.

Ava would only stay with me and even came to the bathroom with me for the first six months of her illness.

I was exhausted and her daddy was sad that he couldn’t help or stay with her during this period.

Thankfully it improved as time went on and she spent lots of time with her family and plenty of outings including a fantastic trip to London in February which Ava planned and thoroughly enjoyed.

Those few months from January to April were great and full of lots of happy memories.

Ava had another session of radiotherapy at the start of June due to her tumour spreading to the bottom of her spine and to help with pain, but we knew it was only for relief.

I noticed a change in Ava during June but it was dismissed as radiotherapy side effects.

I demanded an MRI on the 24th June and was called to the Royal a few days later.

It was very bad news with the tumour spreading throughout her spinal cord and in the lining of the brain and blocking some areas. We were told she had two or three weeks maximum.

Ava was sitting playing the Playstation one handed with her big brother in the waiting room and our hearts just broke.

I then had meetings with the End of Life Team and arrangements were made for her care and pain management.

Ava was awake all of July and was sitting eating ice cream on her eighth birthday and blew out her candles, but the steroids and medication had started to take effect on her.

This continued into August but she started to sleep more and more. She didn’t eat or drink for three weeks and eventually passed away in the early hours of Friday 13th September 2019.

The loss we all felt was immeasurable and our hearts were broken beyond repair.

Ava didn’t stop smiling throughout her illness and she was so brave especially when she went from a happy child, running and playing to being unable to move three of her limbs overnight and permanently wheelchair bound.

So many people came to St Comgall’s to say goodbye on Monday 16th September and although I can’t recall much I know there was so much love for her in the church.

We donated all her money in lieu of flowers to the Cancer Fund for Children and her school also chose them as their charity of the term.

This charity and links2pink were amazing throughout Ava’s journey. Neither of them faltered and remained steadfast with their support throughout.

Also the local community children’s nursing team who were there for us anytime we needed them.

I know we will never forget these people.

We had hoped to have a family fun day on the 25th May for local charity links2pink but it had to be postponed due to the coronavirus outbreak.

We rescheduled for her first anniversary in September but given the current circumstances we couldn’t see it proceeding.

Her ninth birthday is approaching on the 30th July and I know myself, her daddy and siblings are dreading it.

All the firsts without your child are heartbreaking and nothing feels the same.

Ava’s past two birthdays were tinged with sadness due to her diagnosis a few days before and her being near the end of life on her last birthday.

We have a small family circle and know her birthday would likely just pass so we wanted to do something positive and help others.

Links2pink arrived with money unexpectedly when everyone was on zero pay. They listened to me crying on the phone from the downstairs toilet and gave me that support.

It would just be lovely to give something back and help others who are facing illness or just need support.

I can’t stress enough that £9 is not required. Any donation would be greatly received.

Also KC Autos in the town have offered £400 worth of prizes for anyone who makes a donation to the birthday fundraiser. They arranged this themselves and it was very kind.

I know times are tough financially due to the outbreak and we all appreciate every single donation that has been made so far.

You will never know how wonderful it feels to have so many kind people in this town and that they remember Ava, our sunflower girl, and want to donate.

Please help us raise as much money as possible for links2pink - and remember Ava with a smile.

Also if you feel there is something wrong with your health or your child’s please push and get help as soon as possible.