The Antrim musician who was Van's right hand man! 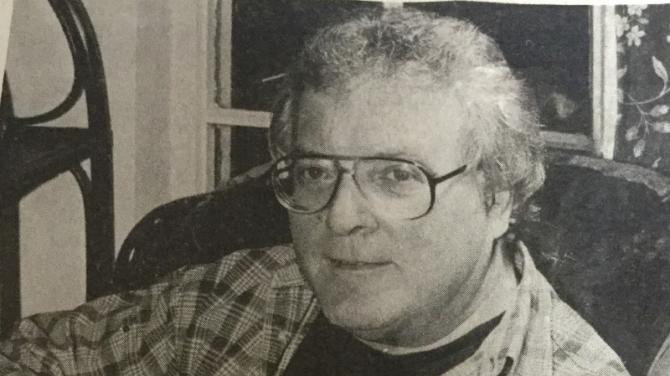 “A YOUNG Jim Morrison decided to drink with us Irish lads,” Antrim man Jim Armstrong reminisces of the heady days when he played lead guitar with Van Morrison’s seminal 1960s rhythm and blues band, Them.

“He came off worst to say the least!”

It was the early summer of 1966 and the band had carved out an impressive reputation for themselves. The previous year, one journalist with the NME had declared Them to have ‘more genuine soul than any of their British contemporaries’.

Appearances on iconic British television chart shows ‘Top of the Pops’ and ‘Ready Steady Go’ had allowed the band plenty of opportunity to capitalise upon the success of their UK Top Ten hits, ‘Baby Please Don’t Go’ and ‘Here Comes The Night’. As such, they already had a sizeable fanbase within hip circles by the time the latter song and ‘Mystic Eyes’ started to gain substantial airplay in the United States.

“They drove us on in an open-topped Cadillac. Masses of screaming kids, a PA with two little speakers and I had a little Fender amp, not miked, to fill this huge outdoor arena.”

It was certainly a far cry from the earnest beginnings of Jim’s musical career. In fact, had he failed his 11+ exam, there is every chance he might never have found himself standing in that American stadium before a legion of baying fans.

“When I passed my 11+, my aunt presented me with an acoustic guitar as a reward. Everyone else got a bike, but me, I wanted a guitar.”

As Elvis Presley and Chuck Berry shimmied their way into the mainstream, nimble-fingered Jim practiced vehemently, lending him a proficiency well in advance of his years - and that of many of his peers.

Jim idolised blues and jazz guitarists like Muddy Waters, Howlin’ Wolf and Joe Pass and, by the end of the 1950s - whilst still a schoolboy - he cut his teeth with a blues band by the name of the Olympics. Armstrong later joined the Meltones, a highly popular and respected jazz outfit on the Belfast live circuit.

However, it was whilst working as a bank clerk in 1965 that he received the offer that sent his career onto a skyward trajectory.

“Them had already been to England and then returned to Belfast for new musicians,” said Jim.

“I had already been offered the job because I had done session work for their managing company.”

That same year, the band made a guest appearance at the NME Poll-winners Concert at Wembley. Sharing the stage with a lineup that featured the crème of the crop of the mid 1960s British music scene - the Beatles, the Rolling Stones, the Kinks, the Animals, the Moody Blues, and Dusty Springfield - they awed the audience with a scintillating seven-minute rendition of ‘Turn On Your Lovelight’.

Of the 51 tracks recorded by Van Morrison and Them during their heyday, Jim played lead guitar on over half. Towards the latter half of the decade, a poll in one music publication saw him voted the third best guitarist in the world. He was beaten only by Jimi Hendrix and Frank Zappa.

And so it was that this ragtag band of garage rockers found themselves amidst the neon lights of Los Angeles in the fullest throes of the Swinging Sixties. They secured themselves a seventeen-night residency at the world-famous Whiskey-A-Go-Go, the de-facto headquarters of the LA pop cultural elite. Underground legend Captain Beefheart - and a then little-known band called the Doors - were the support acts.

“The Doors did all the things that went on to be hits,” Jim added, “and they sounded just like the records did. Jim Morrison did a lot of Van tricks.”

During their stint in LA, the members of Them proceeded to live the rock and roll archetype to the fullest.

“Our drink tab in the Whiskey - beer was free and spirits half-price - was $2,600 in two weeks,” Jim recalled.

Famously, on the final night of their spell at the Whiskey, Them were joined onstage by Jim Morrison and the Doors. Together, both bands jammed their way through a twenty-minute version of the Them classic, ‘Gloria.’

However, Jim Morrison was far from the only music legend Armstrong would meet in America.

His bandmate, Ray Elliott - whom Jim described as a ‘typical looner’ - woke up one morning with a young woman in his bed. When a man with a ‘ponytail and Mexican bandit moustache’ walked in, the woman coolly gestured towards him and explained ‘that’s my old man’.

Ray’s wave of panic subsided when, in Jim’s words, ‘yer man just says, ‘Come on out and hear this album I've just recorded’. And just like that, the band became acquainted with Frank Zappa and his debut LP, ‘Freak Out’.

Jim would go on to take inspiration from Zappa’s idiosyncratic covers of Them songs.

“One of the things I do now is play ‘Gloria in Excelsis Deo’ in the middle of ‘Gloria,” he adds. “I stole this from Frank.”

When Van Morrison parted company with the band in 1966 and embarked upon his illustrious solo career, Them persevered. Their 1968 album, ‘Now and Them’ saw the band flirt with psychedelia - which was to earn Jim some very high praise indeed from one of the genre’s progenitors.

“Frank introduced me to Janis Joplin in Chicago,” Jim said. “She liked the song ‘Square Room,’ my Indian raga.”

Yet, one of the highlights of Jim’s career came during a performance for an LA television programme, the ‘Woody Woodbury Show’.

“I met a hero of mine, the legendary jazz guitarist Joe Pass.

“We mimed to our current single and then played one live - ‘Nobody Knows You When You’re Down and Out’- and Joe Pass and the band joined in. Such a blast!”

As Them’s momentum began to peter out at the end of the 1960s, Jim formed a band named ‘Truth.’ The band’s bassist, Curtis Bachman, was formerly of the Buckinghams - the band behind the million-selling 1967 US number one, ‘Kind of a Drag’. Unfortunately, however, Truth were not to recapture the success of either Them or the Buckinghams and, in 1971, Jim returned home from America completely disillusioned with the music industry.

“I’d had enough with the music business and those who ran it, so I decided to finish with it completely,” he explained.

“So, basically, I came home and before too long took to a job in the Civil Service.”

In 1975, with the Troubles transforming Belfast from a frying pan into a fire, Jim and his young family opted to move to Antrim. Initially living in Stiles, Jim and his wife Anna then settled in the Folly.

But Jim admits he had fond memories of Antrim long before he lived here.

“When I was a youngster, my family would visit the town regularly,” he said.

“I remember having lunch in Hall’s Hotel in High Street, walking through the Castle Grounds and down to the Lough.

“I don’t like cities and Antrim is still quite a small town and generally the environment is nice and friendly.”

By the end of the 1970s, Jim’s enthusiasm for music started to return. He went back to his roots - playing the blues in smoky, intimate pubs and clubs in Belfast and beyond.

As the millennium loomed, Jim went on tour yet again with the Belfast Blues Band, a group that garnered particular success in Germany.

“I have some great friends in Germany, and we are treated like royalty by our hosts,” he told the Guardian at the time. “We also get to play in some great clubs and arenas.”

I like playing smaller venues where I can see the audience. Leipzig, Dresden, and the France Club in Berlin provide just the right atmosphere for a great show.”

The 1990s also saw the genesis of the Jim Armstrong Band, which included the late Jim Gilchrist in its line-up. They continued to tour well into the 2010s.

All the while, Jim was all too keen to share his experience and knowledge to teach budding guitarists how to master the instrument.

“I gain satisfaction from seeing genuinely interested players improve their skills,” said the man once considered one of the world’s greatest guitarists. He offered aspiring musicians the following advice:

“My only advice to them is for continual practice. Don’t practice what you know. Always something new.”