'Ireland has lost a giant' 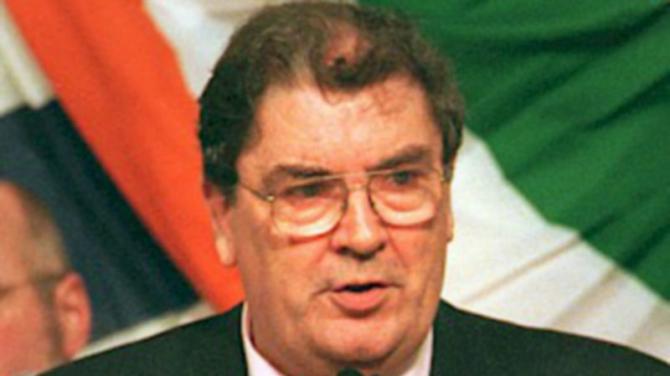 IT is perhaps apt that the death of perhaps the main architect of the Northern Ireland peace process has sparked expressions of grief from across the political divide.

John Hume had been ill for some time, but there was still a tangible sense of disbelief yesterday (Monday) when his passing was confirmed.

He had been a regular visitor to Antrim down the years - and he would seldom pass through Randalstown without stopping to visit old friend Bobby Loughran.

He also worked closely with former SDLP Councillor and MLA Donovan McClelland during the negotiations that led to the Good Friday Agreement in 1998.

Noreen McClelland said Mr Hume’s death at the age of 83 marked the end of an era.

“Though we mourn the passing of John, we are all the more richer for the legacy he left us.

“Above all else, John taught us that politics is first and foremost about people.

“My colleagues and I will continue to follow and practice that truth as we continue to serve the people of Antrim and Newtownabbey.

“John's devotion to this place and his relentless pursuit of peace has created a Northern Ireland were discrimination and violence are no longer everyday realities for our people here.

“Though he and others like him will not see the full spoils of their fight, we will forever be grateful for their sacrifices.

“My thoughts go to Pat Hume and all of John’s children, and we thank them for their sacrifices through the years also.”

And that high regard extended far beyond the party he led for decades.

“John Hume’s huge contribution to political life in Northern Ireland is unarguable, even by those who would have regarded themselves as political opponents,” said the South Antrim rep.

“Throughout the long dark decades of the Troubles, John Hume consistently offered constitutionalism nationalism a peaceful alternative to the violent republicanism of the IRA, which he recognised was utterly futile.

“As Leader of the SDLP he helped deliver the 1998 Belfast Agreement which offered a much needed pathway out of the horrendous violence that had afflicted Northern Ireland for so long, and cost so many innocent lives.

“His efforts were rightly recognised with the award of the Nobel Peace Prize along with David Trimble.

“John Hume commanded respect in Washington, Dublin, London and Brussels, and in his long political career he was elected to Stormont, Westminster and the European Parliament.

“On behalf of the Ulster Unionist Party I would like to extend my deepest condolences to his wife Pat, his family and to all his friends and colleagues.”

“It is no exaggeration to say that each and every one of us now lives in the Ireland Hume imagined – an island at peace and free to decide its own destiny,” he said.

“This is an historic moment on this island but most of all it is a moment of deep, deep sadness.

“In the days ahead, Ireland will be united in mourning his loss.

“However amidst that national mourning, it is equally true that the marking of John’s death also opens up a space to reflect on, and celebrate, the magnitude of his life.”