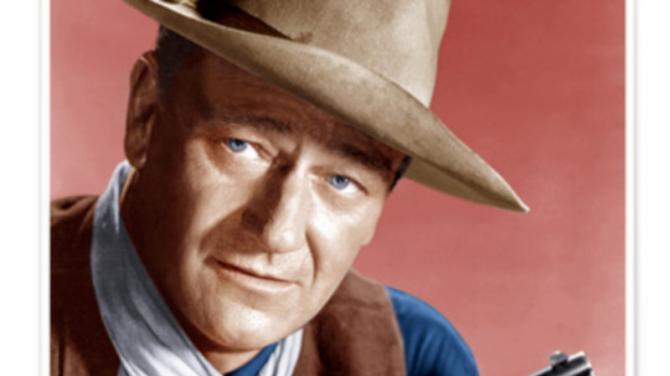 ‘GET off your horse and drink your milk‘ may not be a common request these days, but the Caddy Fife and Drum were determined to raise their glasses to the movie icon that spawned the phrase.

And why shouldn’t they? After all John Wayne is an honourary Randalstown man!

He died 41-years-ago, but the Hollywood legend lives on for generations of fans through his appearance in over 250 films.

He may have made his name in the Wild West, but his roots are in County Antrim - and the Caddy Fife and Drum have made it their mission to make a song and dance about it.

Around a decade ago, they unveiled ‘The Duke’, a drum emblazoned with a picture of the big man himself.

And no-one would have been more pleased to celebrate his local link than the star himself - who, reportedly, was never done ‘banging on’ about his family’s Ulster Scots heritage in the ‘old country’.

THe issue of Wayne - or Marion Mitchell Morrison as he was christened - and his links with the Borough have been a hot topic on Randalstown’s bars for years.

The actor’s great-grandfather, Robert Morrison, was born on the outskirts of Randalstown in 1782, though the exact whereabouts are unknown.

What is certain, however, is that Robert was baptised in Connor Presbyterian Church and after schooling became a weaver by trade.

It is thought that Robert may have been involved in the uprising of the United Irishmen in 1798 but when it failed he was forced to reconsider his position in the province.

After arriving in New York he travelled to South Carolina where he began work in the weaving trade, but his real interest was in the soil.

Within two years of reaching the States, Robert married Mary Mitchell and the coupled settled in Ohio.

One of their children, James, married in 1836 and named one of his children Marion Mitchell Morrison - a name that was passed onto his grandson, who was born at Winterset in Iowa in 1907.

The family were soon on the move again, this time to California - and that is what made all the difference.

The young Marion Morrison used his bulk to bag tough guy roles in the blossoming film industry, and he was billed as ‘Duke’ Morrison in his first significant role in 1929’s ‘Words and Music’.

After that it was John Wayne, and movie history was made. Over the decades he became a rugged, uncompromising symbol of American masculinity, and as a star of the silver screen he proved to be box office gold.

Wayne was a mainstay of the epic western and leading attraction from the 1940s to his last film ‘The Shootist’ in 1976. He even won Oscar in 1969 for his portrayal of Rooster Cogburn in ‘True Grit’.