Is racism alive and well in Antrim? 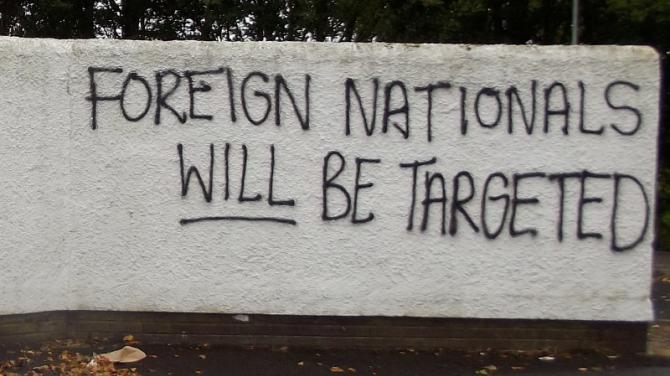 AS Black Lives Matter slowly trickles out from our social media streams and algorithms, conversations surrounding racism are slowly quieting down.

This does not mean the situation has gotten any better, however.

Instead, the topic of racism has fallen victim to the whirlwind of internet culture. Virtue signalling online has taken up space that people of colour required to tell their own stories of injustice, stories that span outside of just America.

It’s all to easy to see racism as an American issue, yet many reckon that racial tensions began to stir in Antrim with the arrival of the first American troops on Ulster soil in January 1942.

Northern Ireland played host to as many as 120,000 Yanks by the end of that year.

Camps were dotted all around the province for the men, including Antrim - and it was an exciting time for the townsfolk.

On 4th October 1942, a racial brawl ended with Bridge Street running red and the death of a black soldier - at the hands of a white GI.

It seems the American GIs had brought chocolates, cigarettes - and racism to Antrim.

A deeply poignant, and troubling, letter from an anonymous black GI was sent to Stormont during these turbulent times.

The author of the letter highlighted the evolving racial tension within the town, the fear that comes with alienation, and how he believed racism was being in some way ‘taught’ to townsfolk.

“Regardless to where a man is born or regardless to his colour, every man has his right to enjoy life here on this earth. Just because I am a dark man doesn’t mean I’m not intelligent,” the anonymous soldier wrote.

“We hate to walk the streets... because we are insulted. They use the words ‘nigger’ and ‘darky’. Those are two words we hate. Those words were brought here by the American whites.”

However, the black GI highlights that this phenomena had already permeated into the British forces, too.

“Lately we have had fights with British sailors and soldiers. They call us Black B**tards, sons of bitches.”

Yet, if this truly was a product of American soldiers why has racism in Antrim evolved to focus on Eastern European immigrants?

The Polish and Slovak diaspora have been slandered openly by a vocal few as being lazy, claiming off benefits, and using housing areas as party hubs.

One such example was sparked by outspoken former Ulster Unionist MLA and ex-Mayor of Antrim, Adrian Watson.

In 2006, Mr Watson expressed concern that ‘paedophiles from Eastern Europe could be arriving in Northern Ireland undetected by the authorities’.

Whilst appreciating that many immigrants are hard working members of society, Mr Watson focused his attention on the examples of young immigrant households causing noise complaints in estates.

“If we go on holiday to an Arab country like Tunisia or Egypt we have to respect their culture, and I think when people come from Eastern Europe to this country, they should do the same,” he said,

“You have to feel for the local people who are living beside them and it is something which the PSNI and the District Policing Partnership need to deal with.

“I am not naive enough to say that British people are not capable of doing these sorts of things, but I would like to go over there and try to do what they are doing here as I am sure there would be consequences - both legal and otherwise.”

He concluded: “Liberals may say that I’m a racist, but I don’t care, because I know that I am not a racist.”

Seamus Davis, an activist working with migrant communities to encourage better integration with their neighbours and infrastructure, noted how ‘shocked and deeply troubled’ he was by these statements.

“I agree that anyone here must live by the law of the land, of course they should. I take exception, however, to the suggestion that migrant workers are coming here solely to party.

“We have already seen a string of shameful attacks in this town and my fear is that this sort of view, if unchallenged, could stir up more racial hatred.”

“Ill considered comments which could incite young people are certainly not useful,” he said.

However, these calls for a stronger stance against racism seem to fall on deaf ears - in some quarters at least.

At a recent Mayor's Inaugural Ball, amongst the mix of powerful and affluent international officials of all creeds and colour, a convicted pipe bomber mingled as a guest. His target had been a Polish family living in the Steeple.

The story of Duran, a Slovakian man who came to Antrim to work, is a heart-breaking one - yet not an isolated event.

Duran completed university in his native country, and then had landed a well paid job as a mechanical engineer.

Things had been looking good for the young man until recession struck, and saw factories falling like dominoes

In June 2011, Duran made the decision to move to Dublin, but did not enjoy city life - so came to Antrim instead.

When he first arrived, the town seemed like a ‘happy’ place.

Yet, Dusan and his girlfriend, who also arrived in search for work, were subjected to a campaign of terror in the town’s Springfarm estate.

“It started with bottles being smashed outside my house, but one day one of them tried to open the door of my car,” the young man told the Antrim Guardian.

They backed off after Duran asked them to ‘stop causing a problem here’, but soon they came back and smashed windows.

“A person then told me that I had to pay protection money so my house would be left alone. They wanted £3,000. I could not afford that and told them so. They said they would take my car instead.

“I said take it, just leave me alone.”

The attacks stopped, but Duran was warned that they would start up again if he went to the police.

On one occasion he was punched in the face with no warning. In another instance he was threatened with a barely concealed firearm.

Work was little better, with colleagues asking when Dusan was ‘packing his bags’ in the wake of the Brexit vote - while a member of the public told him ‘we shoot people like you’ after hearing his accent.

Dusan was ordered to scrub 38 radiators with a tooth brush in work, even though his fellow colleagues used a steam cleaner.

“Do I feel we are treated as second class citizens? Yes. Yes I do,” he said.

“Many Polish and Slovaks are scared about what will happen. After Brexit some people are being very nasty, treating Eastern Europeans very badly. Quite a few have gone home already and others are thinking about it.

Dusan sadly concluded his account, explaining the ‘othering’ he had experienced concisely: “We are all human beings, but it seems all I am is a foreigner.”

Five years ago, the horrific murder of Nelson Cheung shocked the province.

On January 8 2015, the 65-year-old father of four was stabbed 18 times in the chest during a violent robbery.

He and his partner, Winnie Cheung, were on their way home after a day’s work in their restaurant, the Double Value on Main Street in Randalstown.

On the drive home, however, their jeep was forced off the road by attackers.

Nelson had attempted to confront the assailants, but was viciously stabbed in the process.

Focus was then turned upon Winnie, who was verbally abused and dragged by the hair out of the vehicle.

She sustained substantial stab wounds to her hands as she attempted to fend off the blade, and an artery was slashed in the process.

The killers had murdered Nelson Cheung for a handbag, an iPhone, an iPad, two bank cards and a purse containing £200.

Ken Wilkinson, a member of the Police and Community Safety Partnership, condemned the murder adding it had created ‘a very real sense of fear’ among the Borough’s large Chinese community.

“They are absolutely devastated. There is also a fear that this sort of shocking attack could happen again. They feel vulnerable,” he said.

“But this was not an attack on the Chinese community, but the community at large.”

Whilst this sentiment may be true, the suspected racist intent behind the barbarity was enough to lead Winnie Cheung to leave her home in Ulster, and return to Hong Kong.

We must ask ourselves, is it enough to not be a racist?

Antrim is not a bad town, and most right-thinking people would undoubtedly say they don’t have a racist bone in their bodies - but it is not without its flaws.

Duran’s experience sums up the issue at hand perfectly:

“Do I regret coming here? Yes and no.