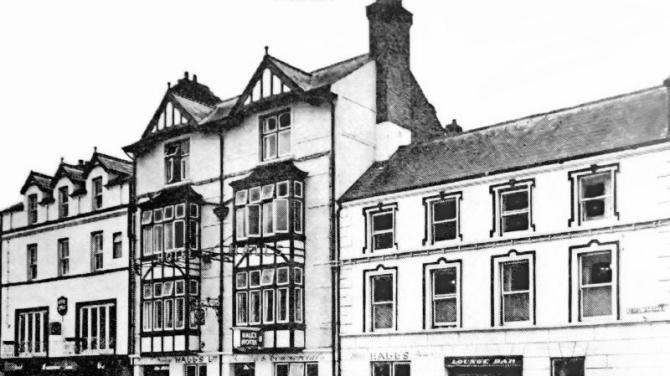 FANCY going to downtown Antrim for your holidays?

Some might balk at that suggestion now, but less than a century ago thousands did just that - and their custom helped sustain a booming hotel trade.

Names like the Lough Neagh or the Antrim Arms will conjure up many happy memories for readers of a certain vintage, but one of those dearly departed establishments is perhaps most sorely missed.

And now more than 40 years after the fateful decision to pull down the shutters on the town centre’s last hotel the Antrim Guardian looks back at the rise and fall of Hall’s Hotel.

A grand building on an even grander scale, Hall’s grew from the amalgamation of the King’s Arms, the Commercial and Massereene Arms - the latter of which was the grand-daddy of them all. Built in 1754, it had tended the needs of the thirsty soldiers after the Battle of Antrim in 1798.

But the modern era really began at the turn of the 20th century when Maud Martha Wilson, the daughter of RJ Hall, arrived on the scene with a mission to transform the hotel into one of the best known in the province.

That she succeeded was a testament to her insistence on quality and high standards - along with her generous nature and indomitable spirit.

A tireless charity worker, she was remembered by her son Robert as a woman who ‘didn’t do things by half!’

Indeed, she regularly cruised the world in an era when such pleasures were the preserve of the few, but while she loved to travel she readily admitted that her ‘heart was in Antrim’.

Her husband Robert was also a well-known and highly respected pillar of the Antrim community, and it is largely through him that the Wilson name is now synonymous with farming.

He purchased Oldstone Farm in 1952 and took enormous pride in his Clydesdale horses, winning prizes the length and breadth of Ireland and comfortably earning the respect of his peers.

He also took an active role in the affairs of the hotel.

When he married Maud it was a modest two-storey building, but he masterminded the dramatic extension which saw it expand to five storeys at the back and three at the front.

This gave them an additional 40 bedrooms, not to mention a grand ballroom which was to become one of the keys to their future success.

Sadly he died in 1957, and the Ulster Farmers’ Union halted their next meeting to mark their esteemed colleague’s passing.

“Mr Wilson was a man of high principle, honest in all things and very fair in his dealings with men,” said the late Ferguson Grainger.

His legacy continued to be felt when many of his children took over the reins at Hall’s.

Joan and Robert (Bobby) looked after the day-to-day running, while Marie became a familiar figure at the reception.

Sadly Bobby died in 2009, but he had often spoken of his ‘many, many fond memories’ of the halcyon days at Hall’s.

“It seems like yesterday when I think of the characters and the staff,” he told the Antrim Guardian in 2004.

“Some of the names that come to mind are Alice Fleming, Mrs McMeekin and Maureen Gaynor who all worked in the reception.

“In the dining room there was Margaret McGurk, Maureen Kennedy, Susan Conway and Marjorie Higgins.

“Then in the kitchen there was Susan Somers, Molly McBreene and Mr and Mrs Adam Gillespie to name a few.”

Bobby was in no doubt that Hall’s more than deserved its province-wide reputation.

“It was undoubtedly one of the most successful and well known hotels in the province,” he said.

“I remember at the height of the tourist season there would have been seven coaches parked at the hotel to take the tourists around the beauty spots of Ulster.

“Although it has been closed for years, people to this day still talk to me about it with great enthusiasm.

“I suppose it’s not surprising that it still seems so vivid to me considering it was my home for a significant part of my life.

“Apart from your years away at boarding school, my sisters and I lived in the hotel until we each got married.

“Although I then moved to Oldstone, I continued to help Joan with the day to day management.

“My memories of the hotel are warm and pleasant and I feel privileged to have belonged to something which forms a part of Antrim’s history.”

In one of his final interviews before his death, another much-missed pillar of that community - former headmaster and councillor Paddy Marks - echoed those sentiments.

He recalled that Hall’s had been a popular meeting place for several groups, including Antrim Bridge Club, Antrim Hockey Club, the Rotary Club and Round Table. The Masonic and Orange Lodges, the Pigeon Club and Killultagh Harriers also invariably held their dinner dances there.

“It was a cosmopolitan hotel and it was at the centre of a thriving tourist industry catering for the Scottish and English market.

“It was also linked with Fawcett’s Hotel in Portrush, organising bus trips all over Northern Ireland.

“As a tourist hotel it organised its own entertainment, culminating in the regular Saturday night dance - which was always well attended.

“I remember a special bus left the back of City Hall at 7.30pm, returning from Antrim at 12.30am.

“I can tell you that many a romance was formed at those dances, and many a heart was broken!”

One of the secrets of its success, he said, was that ‘everyone was made to feel very welcome when they crossed the threshold’.

“Most clubs and organisations held their meetings and AGMs in the hotel, as well as their fundraising dances.

“The Hunt Ball, the nurses’ dance, the police dance, presentation dinners, the whist drives - the list goes on and on.

“These were the highlights of the social scene and were genuinely events not to be missed.

“The Hockey Club also used the hotel as its headquarters where the home team and the visitors met afterwards to replay the game.

“Hockey sticks were even produced in the bar, where older players demonstrated ‘how it should be done’!

“What was wonderful was the fact that there was never any trouble. The hotel was recognised as neutral ground and all sections of the community met and mixed.”

But there was more on the menu than dancing and lively sporting debate, according to Paddy.

“It’s reputation for good food was well known and people from all over Northern Ireland could be found dining in the restaurant.

“Not only was the food good, but the service was excellent, the staff were friendly and the ambience was warm.”

He added that the Hall’s name also travelled well.

“I remember meeting a stranger in London. On hearing I was from Antrim I was asked ‘Do you know Hall’s Hotel?’

“On another occasion I was chatting with a drummer in a band in a club in Vancouver and he asked the same question. He said that he had actually played at a hotel dance!

“I’m sure many others have had the same experience.”

Paddy added that he was not ‘remotely surprised’ that the hotel was still held in such high esteem.

“Hall’s in its heyday gave so much happiness to a lot of people,” he said,

“They all remember the place most affectionately and everyone has their own stories to tell.

“The hotel is gone but those wonderful memories remain.”

Talks about the hotel’s uncertain future began in 1977, but the business finally closed the following year.

Speaking in 1978, Joan McCreery told the Antrim Guardian that it really was the end of an era.

Laughing, she remembered the evening the lights went out during a snow storm in the 1960s.

Alice Fleming began distributing candles to the guests - encountering drunken Germans who insisted on sleeping in the bath and an ‘eccentric’ elderly lady with fading eyesight who was on holiday with her father, who was deaf.

Then there was the occasion when two aristocratic visitors from the Indian Department of Agriculture visited Antrim for a prestigious ploughing competition.

The guests were enjoying their breakfast when the early morning tranquility was rudely interrupted by the sight of a partially clad Indian gent dashing past. Apparently he had locked himself out of his room - or, more precisely, he had locked his trousers in!

A Canadian woman once paid a memorable visit, telling a shocked member of staff that she had travelled 3,000 miles to see ‘the ugliest barman in the world’.

On another occasion a prominent member of the local community was so busy talking in the men’s toilet that he fell down an open drain and ruined his new suit.

“You could write a book about what happened here,” said Mrs McCreery.

“There was never a dull moment in a place like this.”

And that’s certainly reflected in the illustrious guests who dropped by over the years.

From the world of politics Lord Faulkner, Lord Molyneaux, Ian Paisley, Gerry Fitt and William Craig all stayed at Hall’s.

Film star George Formby took up residence during a tour, as did Acker Bilk, dance band leader Humphrey Lyttleton, Wilfred Pickles and his wife Mabel and even Eurovision winner Dana at the height of her fame.

After the fire at Antrim Castle in 1922 Lord and Lady Massereene had a suite of rooms for some time, which were frequented by Lord and Lady Dunleath, Lord Hamilton and Mrs Irvine Buck, daughter of Alexander Irvine, who penned ‘My Lady of the Chimney Corner’.

Then there were the BEA crews, the British Eagle crew and motorcycling legends Mike Hawthorne and Ron Flockhart.

During the Second World War part of the hotel was taken over by American army officers, along with their British counterparts.

Hall’s was also the launching pad for the British Enkalon factory, with many of its senior engineers and planners from Holland booking rooms.

But while these colourful characters certainly added to the rich history of Hall’s. it was the local people who were its life blood.

“It became something of a matrimonial agency,” said Mrs McCreery.

“It’s really surprising how many people met their future partners in life at those dances - people from as far away as Australia, America and Canada.”

The hotel survived bomb attacks in 1972 and 1974 - but the most devastating bombshell came in 1978 when it was demolished to make way for Wellworths supermarket.

As one customer told the Guardian on closing night: “Antrim will never be the same again.”

How right they were.