Things going bump in the night? Who ya gonna call? 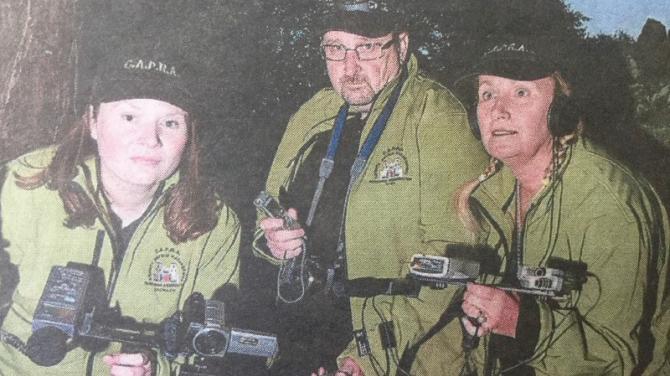 CYNICS will be turning in their graves, but it’s official - belief in the paranormal is alive and well.

A YouGov poll revealed that a staggering 39 per cent of Brits believe a house could be haunted, while 34 per cent reckon ghosts do exist.

One wonders how many of the rest would comfortably stride through a graveyard in the dead of night, safe in the knowledge that the occupants were resting in peace? After all, there’s no such thing.

But then there was that strange incident at Crosskennan in the hills overlooking Antrim in the mid-1980s...

It was a freezing cold night and myself and a foolhardy friend decided to take a stroll into the heart of the beak mid-winter.

There was not a car on the road, just acres of newly fallen snow twinkling under a full moon.

And then we realised that we were not the first to pass way. There, unmistakably, were a man’s footprints - his faithful dog padding along beside him.

Where was he heading? What took him outdoors at this ungodly hour? Curious, we decided to follow, tracking them along quiet country lanes and finally into a field.

And then they stopped dead. The final impression of the shoes was as clear as the first, but rooted to the spot they went no further. The snow around the prints was unblemished, except for the dog’s tracks which seemed to run in panicked circles around where its master had stood - before the paw prints bolted into the night.

The man was nowhere to be seen.

As a ‘foot’ note, Antrim Hospital now stands in that very field and to this day staff do not like to work in certain parts of the building alone. There have been whispers of heavy metal trays flying off work tops. Of a whispered voice. And of slow, deliberate footsteps in empty rooms...

Such tales are the stuff of nightmares for some, but are bread and butter for the County Antrim Paranormal Research Association.

They are now 13 years into their mission to investigate things that go bump in the night - and, no, there is not a painted hearse or nuclear powered backpack in sight.

They see themselves as investigators, not ‘ghostbusters’. And they are deadly serious about their pursuit of the seriously dead.

Not that they’ve see any. Not yet anyway.

Their visits are not ‘Most Haunted’ style scream-fests where every moth caught on camera is held aloft as compelling proof of the life hereafter. No, these are more considered affairs. Scientific, almost.

Drive not by a desire to blindly believe or cynically debunk, they want to understand phenomena that defies explanation. If it’s a bona fide spirit, good - but if it’s not, what is it?

Make no mistake, they want to be convinced. Take James Gallagher, for example. He was a founder member and when he spoke to the Antrim Guardian a couple of years ago he was still waiting for his first spectral sighting. But that doesn’t mean that he hasn’t come close.

“I had no interest in the paranormal at all until my wife and I had an experience about 20-years-ago,” he said.

“We were lying in bed when I heard whistling. It was quite clearly a tune of sorts. My wife said ‘was that you?’ and then freaked out when I said it wasn’t!

Bronach McElhone’s interest also goes back several years. When she lived in Scotland she forged links with The Ghost Club, so when she moved to Northern Ireland CAPRA was the ‘perfect fit’. But while the 10 core members come from very different backgrounds, they are united by a common purpose.

“We are all interested in the paranormal, of course, but we are all open-minded. Sceptical even,” said James.

“As a group we try to explain the unexplained. We follow the evidence wherever it takes us - and if we can find an alternative solution to phenomena, we don’t shy away from it.”

So, where do you start?

Firstly they eschew the ‘parlour games’ often associated with explorations into the unknown. There are no ouija boards, seances or the sort of hysterical communing with the dead made famous by the likes of Derek Acorah.

They have no interest in making a good living from the dead.

“We are not putting on a show. There are no tickets and no cheap scares,” said Jim.

“CAPRA don’t make a penny from our investigations. In fact, it often costs us! Some bigger places are asking hundreds for us to stay the night.

“We do this because it is a passion, and because we generally want to understand.”

“We get approached by people who have experienced things they can’t explain - and they are frightened,” said Bronach.

“We try to be as discreet as possible because confidentiality is important to us, but we will always try and help them get to the bottom of it - even if it’s by discovering an altogether more mundane solution.”

‘Hauntings’ may be an age old problem, but nowadays the tools of the trade are decidedly high tech. Cutting edge recording equipment and infra-red and night vision cameras are deployed, with the material they capture painstakingly analysed afterwards.

“There are certainly times when you play the tapes back and you hear things that put the hairs up on the back of your neck,” said Bronach.

“Typically we will ask if there is anyone there in various parts of the location and then examine the tapes for a response at frequencies outside our hearing range.

“On one occasion we asked for any spirits present to make a noise or a bang. When we listened back you could clearly hear a woman softly saying ‘bang’.”

When it comes to the supernatural, it seems, context is everything. It was a similar story during a recent visit to a public house.

At about three o’clock in the morning, just as the team were beginning to flag, they made a last ditch appeal for any nocturnal visitors to make a noise - and immediately they heard an ‘almighty clatter’ from the bar downstairs.

Three bar stools had been sitting side by side. Now one of them appeared to have been loudly thrown across the room.

“It was pretty amazing, but it was still not proof,” said James.

Both have heard bangs and unexplained footsteps too - but that spectral figure eludes them.

“I’ve seen coins rolling across the floor. I’ve had full conversations with people when no-one is there. But I have to be honest. Much as I’d like to say otherwise, I’ve not seen one yet.”

The hunt, however, goes on. The dead have not shown their faces yet, but rest assured the County Antrim Paranormal Research Association will keep on digging.