Helen Burrows: the first local person to perish in the Second World War 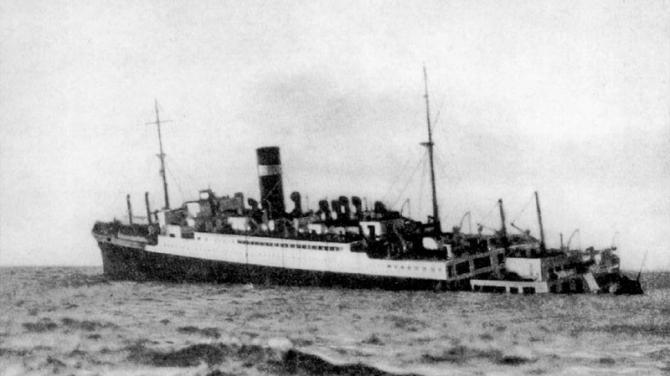 ON September 1st 1939 - the very day that Hitler’s massed tanks rolled over the Polish border - the ill-fated passenger liner S.S Athenia steamed out of port in Glasgow, en route to Montreal.

Antrim woman Helen West Burrows, daughter of James Coleman and Margaret Coleman of York Lodge, was one of her 1,103 passengers.

With the German juggernaut in central Europe apparently unfazed by the series of stern ultimatums to withdraw issued from the British and French governments, it was evident that the conflict on the continent was on the cusp of escalating.

In such a scenario - as the First World War had demonstrated - merchant and passenger ships could not be expected to be spared from the line of fire.

Nonetheless, on September 2 with only one day to spare before the expiration of the British ultimatum, the ship left Liverpool, one of the final stops before her Atlantic crossing, without recall.

Whilst ostensibly a civilian liner, around 500 Jewish refugees were also onboard.

The following morning at 11am, Prime Minister Neville Chamberlain made his historic broadcast to the British people.

“This morning the British ambassador in Berlin handed the German government a final note stating that unless we heard from them by 11 o’clock that they were prepared at once to withdraw their troops from Poland, a state of war would exist between us,” he said.

“I have to tell you now that no such undertaking has been received, and that consequently this country is at war with Germany.”

Despite such a dramatic development, the S.S Athenia was still not re-summoned to port and continued on to her destination as planned.

Whilst sailing roughly 250 miles to the northwest of Inishtrahull Island off the coast of Malin, Donegal, the Athenia was sighted by the German U-Boat U-30. It was the early evening of September 3rd.

The German submarine tracked the Athenia for some three hours before launching two torpedoes, the first of which slammed against the ship’s port side.

With a hole blasted in her hull near the engine room, the stricken vessel - which the captain of the U-30, Oberleutnant Fritz-Julius Lemp, had allegedly mistaken for a troopship or an armed merchant cruiser - began to settle in the water.

A small flotilla of ships - a couple of Royal Navy destroyers, a Swedish yacht, a Norwegian tanker and a US cargo ship - picked up on the Athenia’s distress signal and raced to her aid.

Meanwhile, German liner SS Bremen pointedly ignored the signal and left the ship to her fate.

The Athenia sank 14 hours after being hit, yet thanks to the hasty response of the motley fleet of rescuers who responded to her call for help the overwhelming majority of her passengers and crew were spared.

This stroke of fortune notwithstanding, the rescue operation was miraculous only in relative terms, blighted as it was by the tragic deaths of 98 passengers and 19 crew members.

Within the ship itself, the majority of fatalities were incurred in the engine room and aft stairwell where the German U-Boat’s torpedo had struck its mark.

However, in a horrific turn of events, calamity struck one lifeboat full of rescued passengers when it was crushed after straying too close to one of the exposed propellers of the Norwegian tanker. Fifty lives were lost in this episode alone.

The SS Athenia was the first British ship sunk by German forces in World War Two, attacked within mere hours of the opening of hostilities between the two countries - although an admission of responsibility would not emerge from German authorities until 1946.

Unfortunately, Helen West Burrows would not return to York Lodge.

She died, aged 50, in the early hours of September 4, 1939, apparently having sustained injuries during the sinking of the Athenia.

She was survived by her Canadian husband, William H.R Burrows.

Whilst the next six years would exact a further grim toll of blood, toil, tears and sweat from Antrim, Mrs Burrows was the first local resident to lose their life during the Second World War.