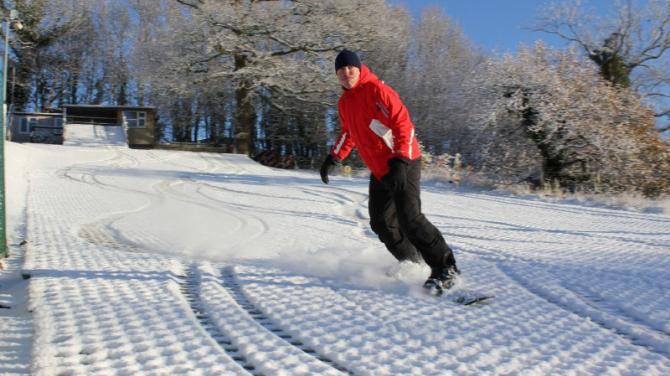 THE turning of a new decade is a momentous occasion - particularly if it finally draws down the shutters on a drab and depressing era like the 1970s!

When you reflect back on the decade that fashion forgot, what images immediately spring to mind?

Are you seeing gaudy flares, platform shoes, long hair and sideburns the size of shredded wheat? Does everything appear to be in need of a bit of a wash, in a world painted in a drab palette of browns and orange?

Perhaps there are grim memories of mass unemployment, of winters of discontent, of civil unrest and strikes, of town centres shaken by car bombs.

Far from a golden age, by any standard. Good riddance to it.

But the 1980s promised to be different. Change was in the air. Anything was possible.

That’s what the Mayor of Antrim reckoned anyway. Writing in the Antrim Guardian back in 1980, Jack Allen said locals were in for a treat.

The perfect antidote, he said, to those who claimed that ‘progress is an alien word’ in the council’s vocabulary.

“We in the council are always receiving complaints that nothing ever happens in Antrim - that there is nothing to do,” he said.

“As we approach the eighties, I felt it was a good time to sit down and review all of our sport and recreation facilities and I think everyone will agree that we are far from lacking in this respect.”

Indeed, he argued that some locals were suffering from ‘a classic case of not seeing the wood for the trees’.

“There is so much development that people just can’t take it all in at time,” he said.

Empty hyperbole? Not so said the Mayor. Nothing speaks louder than results, and he felt that Antrim was leagues ahead of most.

The grass is always greener on the other side, but back in those days before housing developers threw up houses on every scrap of available land, Antrim had no shortage of the stuff.

Take soccer pitches, for example. There was one at Neillsbrook in Randalstown, two at War Memorial Park in Crumlin, five at Allen Park in Antrim and three more at the Lough Road.

Rugby and served by two pitches at Allen Park while hockey was served at the Lough Road.

The ‘new’ community centres were also taking shape. Quite a few, such as Neillsbrook, Muckamore and Crumlin, were built in 1978 - and the ribbon was expected to open at two more in Stiles and Rathenraw in the summer of 1980.

So far, so good. But what else was in the pipeline?

Well, first out of the blocks would be the new running track at the Forum.

The first phase of that project was due to get underway the following May - with the surface of the track to be laid by a French company ‘to very exacting standards’.

But what’s this? Next on the radar, according to the Mayor, was a roller skating area and ice skating rink at the Antrim Forum.

Apparently an informal submission had already been lodged - but the facilities, alas, never materialised.

But here is the big one: a ski-slope at the Forum!

Imagine the adrenaline rush of thundering down the slopes and then going off piste for a microwave burger and a game of Space Invaders?

The council had not given the proposal their full blessing yet, but the members felt that it would be a ‘useful addition to the facilities in Antrim’.

Better still, Enterprise Ulster had already completed ‘a certain amount of preliminary ground work’. How could it fail?

Sadly, the council were unable to move mountains and that ambitious plan fell flat on its face.

Sticking with sports not normally associated with the Borough, Mr Allen said that the jetty where the public queued to board the Maid of Antrim, which the council bought in 1978, also had an additional use - as a ‘water ski start platform’.

If you ever wandered how the water skiers that routinely tear across the bay found their footing, now you know.

But the council were not the only ones spending some serious cash 40-years-ago.

The new Telephoe Exchange was taking shape at Steeple Industrial Estate, as was the new RUC Station at Castle Street - which itself faced the very real prospect of ‘deconstruction’ to make way for the Castle Centre.

Plans for the new Area Hospital were ‘progressing’, said Mr Allen - though he could not have known that it would not finally appear until the mid-1990s.

New schools were mushrooming, including Springfarm and Rathenraw Primary Schools which have since been re-named. Also on that list were Antrim Technical College and Ardnaveigh High School - which have since closed and overrun by vandals.

Four decades on, Antrim has undoubtedly changed beyond all recognition.

But please pause to consider just how different it all could have been if the town had got the ski-slope it had been promised all those years ago. I’m holding onto the skis just in case...